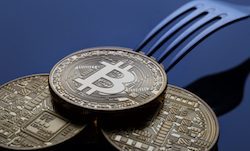 Everything you need to know about hard forks, soft forks, free fork money and fork scams.

Bitcoin frequently forks as do many other cryptocurrencies.

Forks are what happen when a cryptocurrency’s software gets changed or upgraded. Because a blockchain is decentralised, running across thousands of different users’ computers at a time, making changes is difficult.

Developers can’t simply force software changes onto the blockchain. Instead, they have to make it available, and then convince all users to install it and switch over to the new version.

At the time of a hard fork, the entire blockchain is cloned. This duplicates its entire transaction history, and all the coins on it.

But this clone has different DNA. For example, the new cloned species might have a larger block size or better encryption than the previous one.

It’s like an entirely new species of coin that is released into the wild.

Some altcoins started life as contentious or experimental forks:

How often do forks happen?

Anyone can fork whenever they want, so they’re happening all the time. Some forks are hobby projects, some are genuine attempts to improve a popular coin and some are outright scams.

For example, the “Bitcoin Platinum” fork was attracting some attention until it was revealed to be a hobby scam by a South Korean teenager. His aim was to create uncertainty in the market while he shorted bitcoin.

In many cases, yes, because they create a snapshot of the existing network, the new ecosystem will also replicate the coins being held by users. The new coin delivery to existing users is sometimes known as an airdrop.

In most cases, the new coin will be worthless, but in other instances, it will go on to become a valuable currency in its own right.

To get your free money, you will typically need to have the to-be-forked coin held in a wallet of your own, rather than on an exchange (otherwise the exchange will get the coins). You will also need to check that your chosen wallet supports the new coin.

How to claim your free money

If you’re entitled to free coins from a fork, you generally don’t need to do anything to actually claim it. It will automatically be created in your wallet.

Even if you can’t actually claim or use it right away, it’s still going to be waiting for you. There’s no expiry date. As long as you’ve prepared appropriately, you’ll be able to access it whenever you’re ready.

How to prepare for a fork

Forks happen too frequently to prepare for all of them, but fortunately you don’t need to. In order to be successful, a fork depends on having a decent proportion of users come aboard right away.

This means there’s usually a good amount of publicity around legitimate forks, and their due dates are typically specified well in advance.

You only need to make sure you’re positioned to get any free money that might be on the way, and decide for yourself whether the forked coin has a future.

What to do during and after a fork

If an exchange or wallet is bringing in a newly forked token, it will typically freeze transactions in the lead up to, and after, it on boards that carry the coin.

As a general rule, you’ll want to avoid making transactions during a major fork:

What do bitcoin forks mean for its prices?

User communities will sometimes oppose forks on the grounds that duplicating their currency will inevitably devalue it, that it’s unwanted competition and that all the disruption will hurt prices.

This is typically not borne out in reality though. In most cases, a successful fork ends up being great news for traders.

A fork can fundamentally change the future of a coin and put billions of dollars on the line. A minor fork can be safely ignored, but a big fork is a big deal. The Segwit2x (B2X) fork was a big deal. It proposed increasing the bitcoin block size from 1MB to 2MB. This would have the effect of increasing transaction speeds and reducing fees, but also reducing the rarity of the coin and making it more mineable. It was supported by those who felt that bitcoin needed a larger block size to scale effectively and to see wider use as a currency. At its peak, the B2X fork was supported by over 85% of users. Wallets and exchanges were being forced to choose a side.

However, it was opposed by a small but significant contingent of bitcoin developers, who had done a lot of previous work on the blockchain as well as by their supporters.

They accused the B2X developers of attempting a “corporate takeover” of bitcoin, warned of devaluation and said the fork was unnecessary and unsafe. Most of all, they were adamant that no one should refer to the forked version as BTC.

To get a sense of user sentiment, exchanges started trading B2X tokens ahead of the fork. Both B2X and BTC started seeing large price swings as users voted with their money. Eventually BTC prices were consistently sitting higher than B2X.

Just a few days before the fork, B2X organisers called it off, citing a clear lack of consensus and saying they didn’t want to risk fragmenting the community.

Even though the fork never happened, its results can still be seen in the market.

How the cancelled fork changed bitcoin

The fork was initially planned for 16 November and was only cancelled on 12 November.

Almost immediately, the price of bitcoin took a sizable hit and the price of Bitcoin Cash (BCH) jumped to a new high as pro-fork users traded their BTC holdings for BCH.

Bitcoin Cash has an 8MB block size, making it a natural choice for those who felt that a larger block size was necessary for the future of bitcoin.

The cancelled fork seems to have permanently pushed up the price floor of BCH and led to lasting value, but as the pro-fork users feared, the bitcoin network is struggling with high transaction fees and slow transfers. But apparently, this hasn’t really hurt bitcoin’s value.

There are several bitcoin forks in the works for December 2017 and January 2018.

Some or all of these forks are probably not worth paying much attention to. You’ll have to research them for yourself to decide whether they have a future.

Was this content helpful to you?
Thank you for your feedback!
What is Steem (STEEM)? Stratis: The first blockchain for businesses

A beginner’s guide to buying and selling this decentralised, peer-to-peer cryptocurrency.

We compare Coinbase and Coinbase Pro side-by-side so you can see the differences in fees, features, supported cryptocurrencies and more.

Trade cryptocurrency, derivatives and speculate on stocks with this fully-featured exchange created “by traders, for traders”.