Buy or sell bitcoin from a local seller in-person or online on LocalBitcoins.

Bitcoin isn’t usually the best medium to make an international money transfer. In fact, most of the time it’s actually slower and more expensive than other methods like forex services and even bank transfers.
A different story emerges with LocalBitcoins.com, a peer-to-peer exchange. Because you trade bitcoins with other people, you can find attractive exchange rates as long as other traders are willing to offer them. And best of all: LocalBitcoins charges very few fees, if any.

LocalBitcoins is such an effective option that you could theoretically complete an entire money transfer at no cost. Even if you don’t get a deal that good, you could realistically walk away with a low-cost money transfer that’s completed in as little as an hour.

Bitcoin exchange rates aren’t set by LocalBitcoins — instead, they’re set by individual buyers and sellers on the platform. Because of this, exchange rates can vary.

When you buy bitcoins. you could theoretically get an exchange rate that matches the mid-market rate. However, this is unlikely because many users want to make at least a little profit for selling bitcoins.

More often, you’ll get an exchange rate that’s worse than the mid-market rate. The best online offers often hover around 1% above the mid-market rate. As an example, let’s say one bitcoin is worth US$1,000. In that case, someone may sell a bitcoin to you for US$1,010 instead.

What is the mid-market rate?

The mid-market rate is what your money’s actually worth on the global market compared to another currency. It’s the midpoint between worldwide supply and demand for that currency — and the rate banks and transfer services use when they trade among themselves.

Use the mid-market rate as a baseline to compare against the rates provided by your bank or transfer service. With it, you’ll discover which companies offer the best rates.

How much will it cost me to send money with LocalBitcoins?

Fees can be overbearing on other bitcoin platforms, but they’re relatively light on LocalBitcoins.

If you’re responding to an ad, you won’t pay a fee to buy or sell bitcoins. If you’re the one posting an ad, you’ll be charged 1% of the bitcoins traded.

What is bitcoin’s three-letter currency code: XBT or CBT?

In its earliest days, bitcoin’s currency code was CBT. With its growing acceptance as a legitimate currency, the International Standards Organization (ISO) has since designated bitcoin’s notation as XBT.

As bitcoin’s legitimacy (and the general public’s interest in it) increases, you’ll continue to see references to both CBT and XBT until one eventually sticks as the standard.

How long will it take to send money with LocalBitcoins?

When you buy and sell bitcoins, it may take time to line up the right trade partners. Further, the time it takes to complete a purchase or sale depends on how quickly you and your trade partner can send funds to LocalBitcoins (see “How do I send or receive money through LocalBitcoins?” below).

Bitcoin transactions are usually completed within 10 to 60 minutes. That means if the money transfer process goes smoothly, you could complete an entire transfer within a few hours — maybe even within one hour.

There’s no minimum or maximum on how much you can transfer. Limits are set by individual buyers and sellers.

LocalBitcoins has exchangers in more than 200 countries and 14,000 cities around the world. (LocalBitcoin’s office is actually located in Helsinki, Finland.) You can trade bitcoins in over 100 currencies.

What types of transfers does LocalBitcoins support?

You can buy and sell bitcoins using dozens of payment methods, including:

There’s no set method you have to use — you can decide on which one you’ll use with your buyer or seller.

How do I send or receive money through LocalBitcoins?

To complete a money transfer through bitcoin, you’ll need to take these basic steps:

Here’s how to do that in four steps.

1. Find a listing that sells bitcoins.
On LocalBitcoins, you can buy bitcoins online or in person. You’ll see listings on the website’s homepage with ads — click one to see how much a trader is selling bitcoins for. You can also post your own ad. 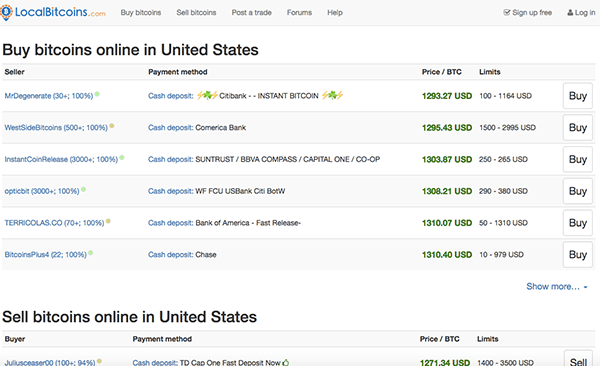 2. Transfer the funds.
When you initiate a trade, you’ll go through LocalBitcoins’ escrow process. Basically, this means that you send money to LocalBitcoins — not the seller. At the same time, your trade partner will send bitcoins to the platform.

When both you and the seller have sent the funds, LocalBitcoins will release the bitcoins to you and the money to your trade partner.

What to look out for

To get started with LocalBitcoins, sign up for a free account online. Just enter a username, an email address and a password. Once approved, you can begin trading bitcoins with users in your area and around the world.