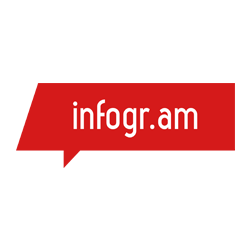 Infogram was created in 2012 by a trio of Latvian entrepreneurs with the purpose of allowing users to render infographics and data-visualisation in a web-based environment. Users can create reports, maps, infographics and charts. In 2014, Infogram acquired Visualoop, a data visualisation blog and news site. The company has 30 employees in two offices in Riga, Latvia, and San Francisco, California.

What does Infogram do?

Infogram has more than 500 maps and 35 charts to choose from for data visualisation projects. These can be used to created column, bar and pie charts, along with word clouds. There are 20 ready-made design themes as well as the ability to create your own brand theme with a custom logo, colours and fonts. To augment the data, Infogram has more than 1 million stock photographs and more than 500,000 icons to choose from, as well as the ability to upload your own logos and GIF picture files. All of these selections come together in an online data editor that allows you to edit colours and styles, alter display options and add icons.

Data can be uploaded from popular cloud services like OneDrive, Dropbox and Google Drive, via a spreadsheet or by use of Infogram’s API. Creations can be downloaded as PNG or PDF files, turned into GIFs or made interactive.

The program’s interactive maps allow you to incorporate data from more than 500 countries and territories using icons, time-series data and heat maps. Infogram is capable of publishing your work online via integrations with Facebook Instant Articles, Medium and WordPress. You can also collaborate with teams in Infogram, defining permissions to edit and access projects.

Infogram has four membership plans, including one free plan and one enterprise-level offering that requires a phone consultation to receive a membership price. Here’s a comparison table of the four plans and their features:

Note: all prices are in US dollars.

Infogram also has special rates available for startups, students and educators, and non-profit organisations. If you believe you qualify under one of these four groups, you must complete a form on Infogram’s website to be approved for the lower rate.

Was this content helpful to you?
Thank you for your feedback!
Skype for Business offers text, voice and video solutions Online Selling Starter Guide for the Newbie

Finder polled over 28,000 people in an online survey across 20 countries to compare NFT ownership and found the Philippines ranks 1st for NFT adoption.

How to make NFTs

Find out all you need to create your own NFTs – the new application of blockchain technology that enables digital ownership of assets.

Your guide to the European cryptocurrency exchange Zonda, which allows users to buy and sell 11 popular digital currencies.

Investing in the era of COVID-19: Finder’s Investing Report July 2020

Finder speaks with investment experts from around the world about what investing looks like in a post-COVID-19 world.

We dive deep into OFX, looking at everything from supported currencies to customer service.

Dropbox is a collaborative cloud-based storage application which allows you to upload, share and manipulate files from any device. You can use security parameters to share individual files or entire folders of data.

Shutterstock offers millions of stock images, pieces of footage and music for purchase and use in your own projects, from individual to enterprise level. You’ll also get access to a free online image editor.

Automate your business’s SEO with SheerSEO

Piktochart uses pre-made templates and a large selection of visual elements to give customers with any level of design skills the power to make stunning infographics, presentations, posters, flyers and more.