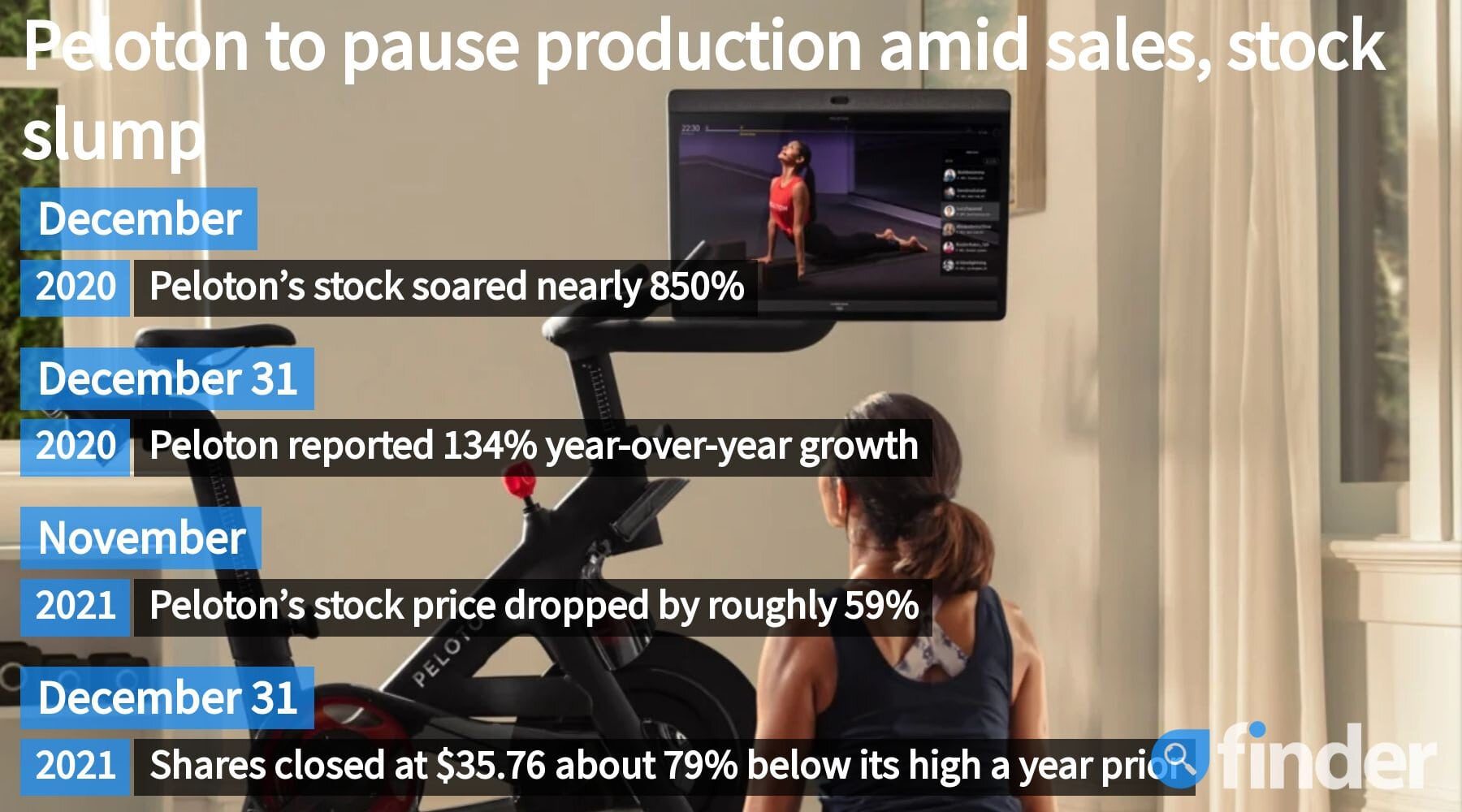 Peloton (PTON), the trendy at-home exercise company that exploded in popularity when the first wave of COVID-19 kept people hunkered down at home, is ready to pause production amid slumping sales.

The company is temporarily halting production of its bikes and treadmills as consumer demand wanes and the company looks to slash costs, according to internal documents obtained by CNBC.

Peloton will pause production of its Bike for two months, from February to March, and its Tread for six weeks, beginning next month. Production of the top-tier Bike+ has been halted since December 2021 and isn’t expected to resume production until June.

There are no plans to produce its more expensive Tread+ treadmill machines in 2022, according to the documentation. Peloton suspended production of the Tread+ after last year’s safety recall.

The company said in a confidential presentation dated January 10 that consumer demand for its connected fitness equipment faces a “significant reduction” worldwide due to consumers’ price sensitivity and increased competitor activity.

The sudden increase in demand during the beginning of the COVID-19 pandemic also led to inaccurate estimations of how many people would be buying Peloton’s connected-fitness products, leaving the company with thousands of bikes and treadmills collecting dust.

The rise and fall of Peloton’s stock

After hitting a 2020 low of around $17.70 during the onset of the pandemic, Peloton shares exploded as the company became a favorite among stay-at-home stocks — stocks of companies that were perfectly positioned to cash in on the stay-at-home movement.

But shares of the one-time pandemic-era favorite began to slump in 2021 as investors started to focus on companies that would benefit from the economy reopening and consumers returning to in-person activities.

The company cut its outlook for the full fiscal year, citing waning demand for its exercise equipment and ongoing supply chain challenges.

“We anticipated fiscal 2022 would be a very challenging year to forecast, given unusual year-ago comparisons, demand uncertainty amidst reopening economies, and widely-reported supply chain constraints and commodity cost pressures,” Peloton CEO John Foley said in a letter to shareholders.

Peloton recognized that price remained a barrier to purchase for many people, which led the company to lower the price of its original Bike to $1,495.

Revenue grew 6% to $805.2 million from $757.9 million a year earlier, marking a significant slowdown from the 230% sales spike that Peloton reported in September 2020 at the height of the pandemic.

After a tough 2021, Peloton is reportedly bringing in management consulting firm McKinsey & Co. to evaluate its cost structure and potentially eliminate jobs.

Among other areas, the firm is possibly looking to target Peloton’s apparel division amid particularly weak sales numbers. In addition, employees at Peloton’s 123 retail stores may have to start taking customer service calls when customer traffic slows, and 15 stores could close.

Moving forward, Peloton will also be tacking on hundreds of dollars in fees for delivery and setup of its Bike and Tread.

The company says on its website that Peloton Bike customers will have to pay a $250 delivery and setup fee and Peloton Tread customers a $350 fee starting January 31. That will bring the costs for those products up to $1,745 and $2,845, respectively.

Separately, news of insider sales totaling millions of dollars hasn’t helped. Peloton executives and insiders sold almost $500 million worth of Peloton stock before its sharp decline, according to filings with the Securities and Exchange Commission (SEC). Many of the sales were at prices over $100 a share in the months leading up to the stock’s big decline. These sales were a part of 10b5-1 plans, or prescheduled selling programs.

It’s worth noting that under current SEC rules, prescheduled stock sales can be canceled. In other words, insiders can cancel scheduled stock sales when it works for them and leave it in place when it doesn’t. The SEC recently proposed a new rule aimed at deterring this type of selective cancellation.

What’s next is unclear, but Peloton’s due to release earnings on February 8. Wall Street consensus is that Peloton will report second-quarter sales of $1.15 billion and a loss of $1.28 per share.

Earlier this month, JPMorgan analyst Doug Anmuth slashed his price target and revenue estimates. He expects second-quarter sales of $1.1 billion and gave the stock a price target of $50, down from $70.

Of the 31 analysts covering the stock, 15 have called it a Strong Buy or Buy, compared to 14 Holds, two Underperforms and no Sells.

Analysts say Peloton’s next challenge is to introduce new workout devices beyond its bikes and treadmills and encourage existing subscribers to build out their home gyms with Peloton equipment.

In November 2021, Peloton announced it would be launching a new connected strength training product early this year called Guide, which will add to its lineup of at-home bikes and treadmill machines. Guide will be sold in a bundle ​with its heart rate armband for $495 in the United States and Canada.

Whether this is the path forward investors are looking for remains to be seen.

At the time of publication, Matt Miczulski owned shares of PTON.