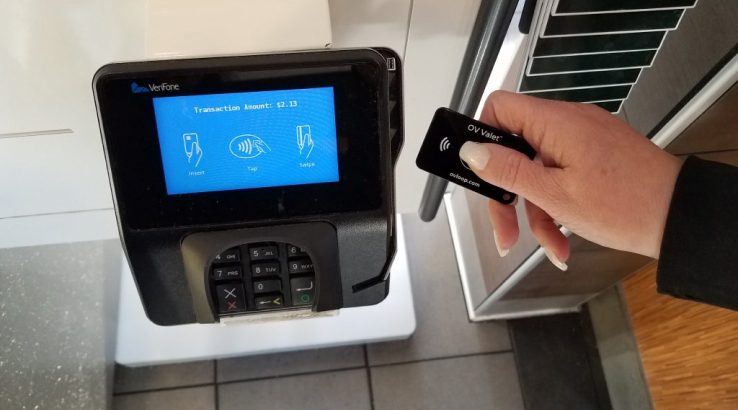 OV Valet is iPhone compatible and works in places where Apple Pay doesn’t.

How does OV Valet work?

The idea is simple: OV Valet is a small key fob that houses your credit card information. After loading your credit card info onto the fob, you can check out at the store – or restaurant – by holding the fob against a point-of-sale (POS) card reader and pressing a button.

Aside from the checkout method, the biggest difference between OV Valet and existing mobile payment systems is compatibility. Unlike Apple Pay, OV Valet is compatible with traditional magnetic strip readers in addition to contactless near field communication (NFC) systems. This means that if you’re at a retailer that has an old-fashioned card-swiping POS reader at checkout, you could still pay with your OV Valet in many cases.

OV Loop claims that the OV Valet is compatible with 94% of businesses around the world, with systems that rely on NFC alone available in less than 50%. Current figures from the National Retail Federation note that roughly 6 in 10 US retailers accept NFC payments.

While it aims to compete with Apple Pay and similar payment options, OV Valet differs in form, bringing with it some unique pros and cons.

If OV Valet’s retail coverage is as advertised and the startup courts enough participating banks, this new mobile payment system could prove promising. The OV Valet is particularly attractive for consumers who don’t live near retailers that support the latest NFC technology.

But the traditional mobile wallet’s strength has been in its ubiquity. Nearly everyone has a cell phone and we rarely leave the house without it. How effective the OV Valet can become will depend on how easily consumers can get their hands on one, and whether they want to carry around another device.

As of this writing, OV Loop is halfway to its funding goal of $50,000. As we get closer to launch – assuming OV Loop reaches its goal – we’ll bring you more information about card support and how the OV Valet works in practice.