A single night in a French public hospital could set you back over $500, but travel insurance for France costs as little as $5/day*.

A single night in a French public hospital could set you back over $500, but travel insurance for France costs as little as $5/day*.

Whether you’re backpacking or planning a romantic getaway, travelling to France doesn’t come without its risks. From pickpockets, to pneumonia, you never know what could happen, and it’s better to be safe than sorry.

Find out more about Travel Insurance for France

What are some travel risks specific to France?

There are risks that visitors need to be aware of when travelling in France. These are hazards common to many European countries and include:

There are risks such as these in every country to varying degrees and they serve to highlight why it is so important to have travel insurance when holidaying overseas.

What activities should you consider getting extra cover for?

There are a huge range of activities to pursue in France, from bicycle riding by the Seine, to skiing in the French Alps. They include:

Some of these activities are regarded as being higher risk than others, particularly motorcycling and adventure sports, so it would pay to take out extra cover for those activities not automatically covered by your travel insurance. 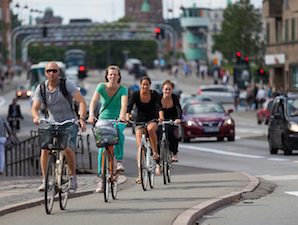 The dangers of cycling in Paris

Cycling is a popular means of transport in Paris, which has around 650 kilometres of dedicated cycle routes. Because of the number of cyclists on the roads and the famously erratic driving habits of Parisian motorists, cycling in Paris can be a dangerous pastime.

Cycling around the Arc de Triomphe for instance can be particularly perilous, with traffic coming at you from all directions and no one apparently willing to concede right of way.

Do you have travel insurance cover?

So if you plan to cycle in Paris, make sure it’s covered by your travel insurance and read the PDS carefully to see what the conditions are. And if the cover doesn’t seem comprehensive enough, you might want to consider taking out extra cover … just in case.

How do I make a medical claim?

If you are unlucky enough to become ill or injured in France, you will be glad you took out travel insurance with overseas medical cover. France has no Reciprocal Healthcare Agreement with New Zealand and the average cost per day in a French public hospital is around $500.

Ideally, you want your hospital bills to be paid directly by your insurer and some hospitals require such upfront payment. So when making a claim, you will need to contact your insurer and request upfront payment of your medical bills and submit a claim form, along with any necessary supporting documentation (i.e. medical bills, police reports etc).

This piece of advice is crucial, as your eligibility to claim will largely depend on certain conditions in the fine print of your policy.

Julia had worked long hours in hospitality to fund her 6 month Euro-trip on a budget. Just before she left, Julia bought a basic travel insurance plan. After nearly 6 months of exploring the continent, Julia decided to spend her final week, and what was left of her budget, in the southern part of France, Nice. On a lazy afternoon spent at the beach, Julia cut her feet badly on broken glass. With blood rushing out of her feet, she was rushed to Hospital Saint-Roch.

The costs of the ambulance, stitching and other hospital costs totalled over $5,000. When Julia attempted to claim she was quoted a $500 excess charge, sending her into a severe panic as she had withdrawn from her emergency funds to pay for her final week’s accommodation. Luckily, Julia was able to nominate her Dad to pay for the excess and return home smoothly, with the hospital bill taken care of.

If an emergency situation arises while you are holidaying in France, there are several ways you can get help:

What are the specific entry requirements or rules for France?

As a general rule, New Zealanders holidaying in France or in countries that are part of the “Schengen Zone” for less than 90 days do not need a visa. If you are planning to spend more than 90 days, you will need to apply at the French Embassy in Wellington, New Zealand for a visa before you depart.

As in many parts of the world, tourists can be seen as fair game by less desirable locals. When travelling in France, always carry your money securely in a money belt or internal pocket and be on the lookout for pickpockets, thieves and scam artists, particularly around major tourist attractions such as the Eiffel Tower. Popular scams include:

When selecting the level of travel insurance you will need, there are five questions to ask yourself:

Travel insurance offers a range of benefits, including cover for medical expenses and evacuations, cancellations and delays and loss or theft of belongings. However, there are some common exclusions where cover will not be provided. These include;

As this guide shows, there are risks involved with travelling to any country and France is no exception. But as long as you exercise common sense and have comprehensive travel insurance to cover the unexpected, there is no reason why your French getaway shouldn’t be a safe and memorable experience.

*The use of the term ‘Best’ is not product ratings and are subject to our disclaimer. You should consider seeking independent financial advice and consider your own personal financial circumstances when comparing travel insurance policies.

Maurice Thach is a publisher at Finder who covers anything that sounds hard to compare. This includes life insurance policies, side hustle ideas and energy plans. Maurice has a Bachelor of Commerce from the University of New South Wales, a Tier 2 General Insurance certification and a Tier 1 Life Insurance certification. Outside of work, you'll probably find Maurice hitting up the nearest basketball court.