RBNZ Survey: 73% of experts expect a recession before 2025

12 July 2022, New Zealand –As a recession looms, homeowners can expect further hikes to their mortgage repayments, according to a new Finder poll.

In this month’s Finder RBNZ Official Cash Rate Survey, 13 experts and economists weighed in on future official cash rate (OCR) moves and other issues relating to the state of New Zealand’s economy.

The majority of panellists (85%, 11/13) believe the RBNZ will increase the OCR by 50 basis points on Wednesday.

“Kiwi homeowners should prepare for a further triple whammy of rate rises this year.

“With many Kiwis doing it tough already, this will be a bitter pill to swallow.”

A Finder nationally representative survey of 1,504 respondents in May found 1 in 3 Kiwis (34%) ranked their rent or mortgage payments in their top 3 most stressful bills.

Dr Oliver Hartwich from The New Zealand Initiative agreed multiple rate hikes were on the horizon.

“We are still in the territory of negative real interest rates, inflation expectations are becoming entrenched, and the RBNZ has signalled that further increases can be expected.

“For all 3 reasons, I expect an increase in July, followed by further increases over the coming months,” Dr Hartwich said.

Mark Holmes from the University of Waikato said rising inflation was still a major concern for the economy.

“Another 50 basis points increase is required in order to keep on top of the fight,” Holmes said.

Property prices will continue to fall

The median national house price dropped sharply by 4% in May from April, according to recent figures released by The Real Estate Institute of New Zealand.

The overwhelming majority of panellists who weighed in* (83%, 10/12) say property prices will continue to fall in 2022.

Most experts agreed that the main driver will be rising mortgage costs in the form of higher interest rates and lower immigration levels.

Kelvin Davidson of CoreLogic said the forces that pushed property prices higher were now in reverse.

“Mortgage rates are higher, more listings are available and mortgage supply is being restrained,” said Davidson.

Sharon Zollner from ANZ agreed that rising interest rates and quite possibly negative net migration were contributing to the fall.

Donal Curtin of Economics New Zealand Ltd said all of the factors point to one outcome.

“A starting point of high unaffordability, exacerbated by rising mortgage costs and falling real household income (and with possible pick-up in net emigration) and prices can really only go one way,” Curtin said.

Those expecting a recession agree it will happen in either 2023 or 2024. 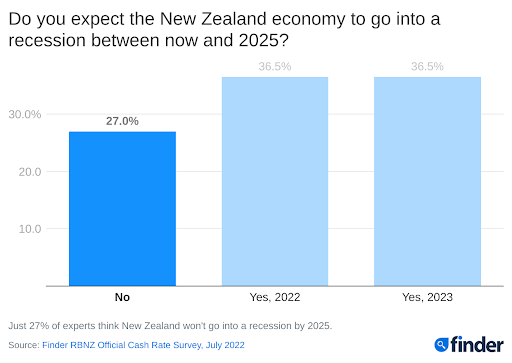 Birdsey said now is the time for Kiwis to shop around for better deals on their regular expenses.

“Savvy swaps on your ongoing expenses – like refinancing your home loan or cutting back on your subscriptions – could save you hundreds or even thousands of dollars a year.

“If a recession is coming – how deep it cuts will depend on how quickly we can get inflation under control and how the property market fares,” Birdsey said.

While the government has proposed changing industrial relations law concerning wage and conditions negotiations under its Fair Pay Agreements policy, almost 4 in 5 experts (78%, 7/9) believe this policy will not help to lift wages and conditions for workers.

On the other hand, positivity towards housing affordability (36%) slightly increased from 25% in the May survey. 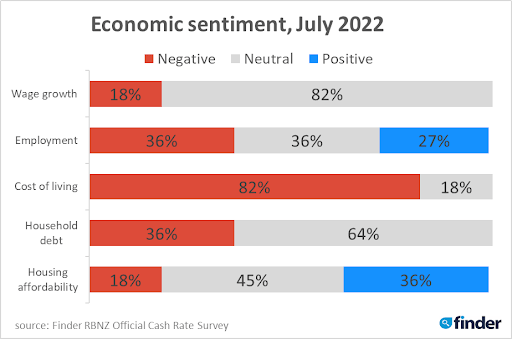 Debbie Roberts, Property Apprentice: “The RBNZ is likely to increase the OCR by at least 0.5 bps this month, with additional increases through to the end of the year, as indicated at their last announcement.”

Alfred Guender, University of Canterbury: “Anything but a continuation of the tightening cycle would be a surprise.”

Saten Kumar, Auckland University of Technology: “To combat inflationary pressure, it is reasonable for RBNZ to continue uplifting the official cash rate in the short run.”

Mark Holmes, University of Waikato: “Rising inflation is still a major concern for the NZ economy. Another 50 bps increase is required in order to keep on top of the fight.”

Brad Olsen, Infometrics: “Inflation remains high, and expectations are not yet re-established that inflation will be brought under control. Demand continues to exceed supply in the New Zealand economy, and removing stimulus remains critical. The economy needs to move from a rolling boil to a simmer, and higher interest rates will help achieve that lowering of temperatures and bring about price stability sooner.”

Dr Oliver Hartwich, The New Zealand Initiative: “We are still in the territory of negative real interest rates, inflation expectations are becoming entrenched, and the RBNZ has signalled that further increases can be expected. For all 3 reasons, I expect an increase in July, followed by further increases over the coming months.”

Michael Reddell, Croaking Cassandra economic commentary blog: “There is good reason to suppose that between the substantial OCR increases already put in place and the slowing world economy, that enough will soon have been done to begin to materially lower core inflation, probably involving a reasonably significant recession.”

Kelvin Davidson, CoreLogic: “It’s clear that inflation is still a huge issue, and although there are some fears about a rise in unemployment, it’s still low for now.”