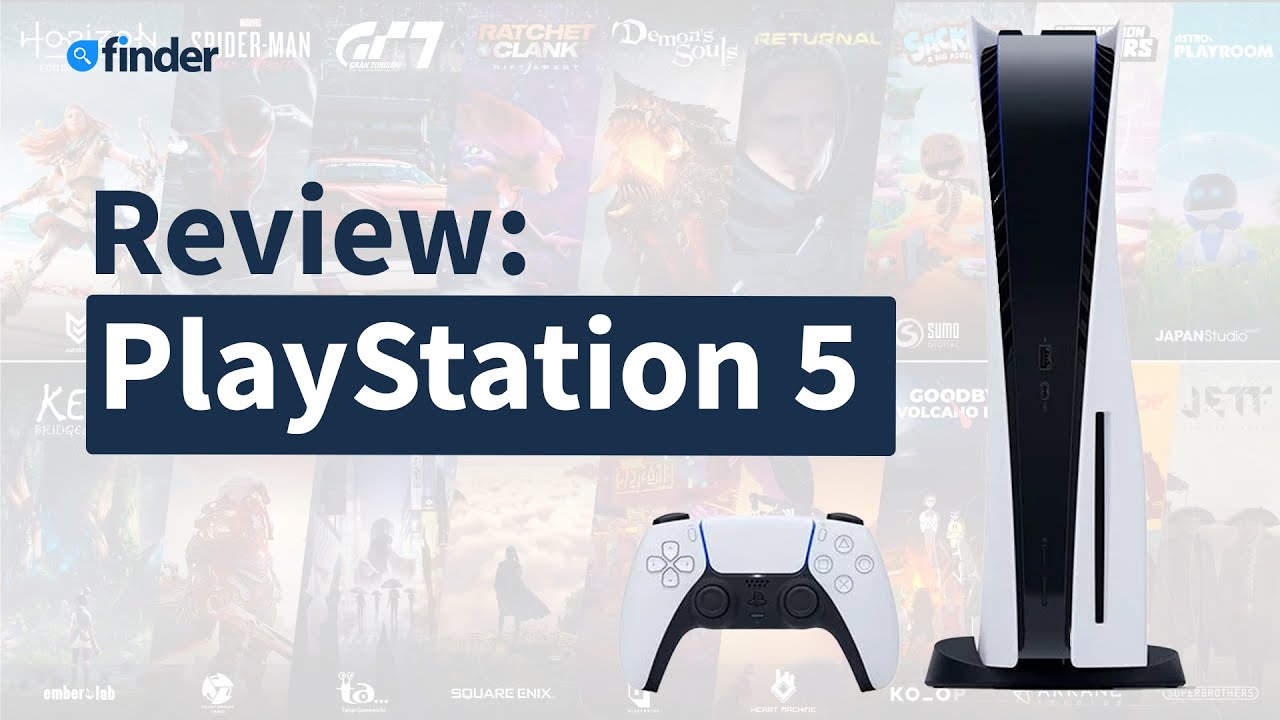 Sony’s next-generation console makes some bold moves, but do they pay off? Find out in our PlayStation 5 review.

What I love most about the PlayStation 5 is that it seeks to push video gaming forward. Yes, all those extra teraflops are nice and very much welcomed, but shiny graphics and blisteringly fast framerates aren’t the be all and end all. Ask Minecraft. Ask the Nintendo Switch. After over four decades of video gaming, what a next-generation console needs to excite this old dog is some wow factor. Something I haven’t experienced before.

In this regard, the PlayStation 5 can be considered a success. But that triumph is one largely suspended in a state of potential. Dependent on what the console can achieve if developers take it seriously.

Let’s dive into my PlayStation 5 review.

Beauty is in the eye of the beholder

You certainly shouldn’t judge this book by its cover. Reaction to the PlayStation 5 design has been mixed and personally, I’m not a fan. It’s too damn big. And the curved, white faceplates make it awkward to place in the preferred horizontal position as it needs to be balanced on a cheap, plastic stand. The textured, white with black (and blue glow) brand play works a treat across the peripherals, but not on the console itself.

Placing the front USB port in the middle of the console only makes its face fuglier when you plug something in, too. Until an inevitable PS5 Slim comes out in a few years from now, there’s no way getting around looking at this beast as it currently stands. A colossus shadowing your entire lounge room.

The console also generates a significant amount of heat, although it’s whisper-quiet. Even if you’re sitting right next to it waiting for your DualSense to charge, you can’t hear the thing at all. A marked improvement on the fighter jet that was the PS4.

Thankfully, looks are only skin deep. When the PS5 fires up its true beauty begins to emerge. The new user-interface is delicious. It’s fast, it’s smart, it’s organic and it feels ultra-modern. It’s your first sign that things won’t be as they were before. This isn’t an iterative console like the Xbox Series X, but one that seeks to evolve the PlayStation experience and take it into new territory.

I respect that. We all should.

I love the way the different parts of the user-interface are integrated with each other. The store, the community content, your party chats, trophy goals, streaming and more are all unified. Even mid-game you can quickly bow in and out of seeing what’s going on in other players’ lounge rooms as swiftly as pausing and restarting. Being able to watch spoiler-free tips videos and the streams of friends as you play via a picture-in-picture mode is genius.

The system is also built with sharing front of mind. The new HD camera comes with dual wide-angle lenses and software that automatically removes the background. When you combine this with the controller’s in-built mic, which uses software to remove background noises, you have an out of the box streaming platform that can place you and your voice over the gameplay like a pro.

Yet there’s room for improvement. Touchpad and voice control support of the UI appears to be missing. (I’ll update this PlayStation 5 review if that changes in a day-one patch.) There’s also no Quick Resume feature where you can easily hot swap between paused games, an experience I’ve quite enjoyed on the Xbox Series X. But surely these features can come down the track.

Defining the feel of next-gen gaming

Astro’s Playroom will likely be your first port of call. The five-hour, family-friendly platformer comes already pre-installed with every PS5 and acts as a tech demo for the new DualSense controller. As soon as it loads up and you feel that new controller in your hand you know the PS5 has the potential to level up gaming. There’s a stack of great features in the controller, but as I found in my DualSense review, it’s the Haptic Feedback and Adaptive Triggers that truly make it shine.

This provides a sensory touchpoint with a game’s world I’ve never had before. Sure, Rumble was nice, but it was also generic. This is targeted and deliberate force feedback on a whole different level. This new type of sensory immersion must be experienced to be believed and while it may not be a game-changer on its own, it’s a significant point of difference for Sony’s console.

(What a shame we can’t feel its impact in VR. But more on that later on in my PlayStation 5 review.)

The question is, of course, whether the DualSense will be consistently utilised by developers moving forward in a way that’s meaningful. Where Astro’s Playroom makes the DualSense a wonder at every turn, another first-party launch game, Marvel’s Spider-Man: Miles Morales, is less convincing. Significant feedback occurs mostly in cutscenes, but it takes more of a one-rumble-fits-all approach during gameplay. You can’t feel your web straining under the pressure when you swing too far, for example.

Will it reach its potential?

This concept of potential experience vs realised experience also extends to Sony’s new 3D audio engine Tempest and the blisteringly fast SSD drive. Both look to take player immersion to new levels; the former with a sound experience that simulates real-world dynamics and the latter with worlds that are larger and more detailed as assets can be loaded faster. Both advancements are great on paper. But will developers – in particular third parties working across formats – consistently utilise them in a meaningful way?

I applaud Sony for building this foundation for advanced gaming content and I’m not about to criticise the console for what may or may not happen in the future. But when I talk of the PS5 being full of potential, this is what I refer to. The “what if” regarding developers striving to be the best they can on PlayStation.

Sony owes it to itself to set high expectations on games it approves for sale on its console.

There have been some complaints about the launch line-up for the PS5 not being that great, but I don’t agree. Launch line-ups are rarely spectacular, yet there’s still a broad range of exclusives on offer from day one. It’s led by a blockbuster Spider-Man sequel. It’s joined by Godfall, Demon’s Souls Remake, Sackboy: A Big Adventure and The Pathless.

Also read: Full list of over 130 announced games for PS5

Sony has also announced a run of big-name franchise returns for 2021 and I’ve every faith the company will continue to deliver solid exclusives for years to come. Sony has never let me down in this regard. It’s hard not to get excited about new God of War, Gran Turismo, Ratchet & Clank and Horizon games. Plus, we’re already seeing strong support for the Japanese-made console from other Japanese developers.

Further to this, the PlayStation Plus Collection rewards subscribers to Sony’s online service 18 free backwards-compatible PS4 games to swell their library. (They’re great games, too.)

Sony is hinging a lot on the speed of its SSD to position the PS5 as the better long-term gaming platform of this generation. And it comes at a cost. The internal SSD is barely 650GB after the operating system install, leaving little room for games. More than a third of that is gone by the time you install Call of Duty: Black Ops Cold War, Spider-Man: Miles Morales and Dirt 5.

That’s not good enough. And upgrading the innards with more space is an expensive exercise.

Yes, you can use an external hard drive, but playing games off that neuters many of the next-gen benefits. It’s a huge misstep not just from Sony, but also Microsoft, to hinge so much of what makes their consoles great on a hard drive that can hold just a handful of games.

Indeed, I’m worried about the ongoing expense of owning a PlayStation 5 for gamers. The DualSense, a requirement for any PS5 game, is expensive (albeit awesome). And in addition, Sony is missing a trick by not having an alternative to Microsoft’s Game Pass.

I can deal with no xCloud as streaming technology of that ilk is still out of reach for many home Internet connections. But a subscription service giving you effectively unlimited gaming for a small monthly fee just makes a whole lot of sense in 2020. Sony doesn’t have it and Microsoft does. Which means Xbox Series X players will be doing a lot more gaming for a whole lot less money and that is a win for its rival I cannot ignore in my PlayStation 5 review.

I’m also hugely disappointed by the way Sony has approached virtual reality. Yes, it has been a slow burner and represents a small part of the PlayStation community. But it’s also aspirational and as such, a big point of difference. And the biggest thing that held PSVR back was insufficient power, which is no longer an issue.

It’s not the PS5’s fault, but Sony has still dropped the ball. More should have been done to ensure genuine backwards compatibility for the PSVR hardware and its games. As it stands, you can only use the PSVR headset on a PS5 with an adaptor for the old camera, using the old controllers and with PS4 games that haven’t been updated to PS5 editions. Now that’s awkward.

Yet I remain a big fan of the PlayStation 5. Sony is trying to deliver a new kind of playing experience for gamers – how can that be a bad thing? Sure, there have been missteps on that journey (see the design) and consequences to the decisions with regard to hardware and controller (see backwards compatibility and internal storage capacity). But the potential of the PS5 is unrivalled.

You may end up better off financially in the long run with the Xbox Series X and Game Pass, but you could miss out on what the next generation is all about. The feel of playing a game. Ask me in a few years whether or not the PS5 reached its potential. I’ll either smile and say yes it did or I’ll get really angry with Sony for not demanding its developers strive to maximise the strengths of its console.

I have faith. And I believe Sony has entered this generation with a bang, armed with a console that intends to take us into the future. Where greatness awaits.