Despite the Reserve Bank advising that financial institutions are not yet operationally ready for interest rates to dip below zero, experts say the official cash rate (OCR) could enter negative territory within a year.

In the latest Finder RBNZ Official Cash Rate Survey, 16 experts and economists weighed in on future OCR moves and other issues related to New Zealand’s economy, including mortgage rates and monetary policy.

When asked about the next OCR move, the majority of experts (15/16) predict a hold for this month, yet 12% (2/16) think the Reserve Bank will cut the official cash rate by September.

Alfred Guender from the University of Canterbury said the road ahead remains highly uncertain.

“Where we go from here depends on private-sector decisions, fiscal spending, and, importantly, on what happens to the world economy,” he said.

The possibility of a negative cash rate also remains front of mind for experts – a third of those surveyed (31%, 5/16) believe the OCR will drop below 0% within the next 12 months.

This comes as the Reserve Bank recently advised that without other stimulus measures, negative interest rates of minus 2 percent would be required to achieve its inflation and employment targets.

Dr Oliver Hartwich from the New Zealand Initiative, the lone expert predicting a rate cut in June, said a negative OCR may happen as early as this month.

“The RBNZ has signalled it is prepared to take the OCR lower if needed – even into negative territory – so we can expect this to happen. I would not be surprised if they made that move at their next meeting,” he said.

“The RBNZ should opt to expand the Large Scale Asset Purchases (LSAP) programme, or provide term lending to banks, as a more effective way of lowering retail deposit and lending rates.”

Kevin McHugh, Finder’s publisher in New Zealand, said that if the OCR does become negative, it’s unlikely that retail banking customers would be directly impacted.

“A negative OCR would generally only apply to the wholesale rate that banks pay, rather than the retail rate offered to consumers.

“This means it’s unlikely the bank would charge a fee to hold your savings. Kiwis don’t need to stuff their cash under the mattress just yet,” he said.

On the bright side for those looking to buy property, more than a quarter (27%, 4/15) feel positively about the affordability of housing, with only one (7%, 1/15) responding negatively. This follows May survey predictions that the median house price would drop by as much as $76,000 in Auckland and $35,000 in Christchurch. 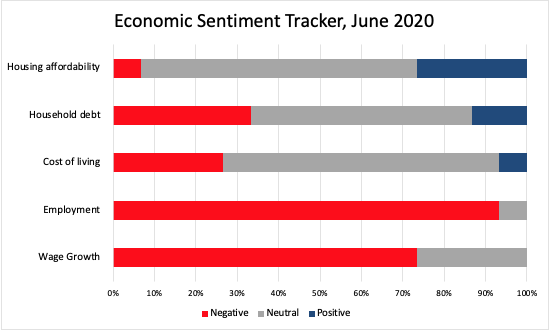 In what will come as more good news for buyers, 80% of experts (12/15) predict further home loan rate reductions within the next 12 months. Currently, one of lowest rates on the market is 2.58%.

According to Brad Olsen from Infometrics, “The current low interest rate environment is increasing the chances of a 2.00% [home loan] rate at some point.”

Debbie Roberts from Property Apprentice says mortgage customers are set to come out on top as banks attempt to outperform each other.

“Banks will be competing for business from strong applicants deemed to be lower risk, such as home buyers. It is highly likely that banks could compete with each other with regards to interest rates,” she said.

Debbie Roberts, Property Apprentice: I think it is unlikely that the RBNZ will increase the cash rate within the next 12 months. However, trying to estimate when or if the RBNZ will decrease the cash rate in such uncertain times is purely guesswork. While there are sectors of the economy that have been severely affected by the pandemic, there are others that have absolutely thrived. Therefore I believe that this is going to be a “steady as she goes” approach until further data becomes available over the next few months now that we are at level 1.

Christina Leung, NZIER: I actually think any change is beyond this horizon.

Robin Clements, UBS: There is some risk of the OCR going lower in the next 12 months, otherwise the OCR will go higher but probably not before the end of 2021.

Brad Olsen, Infometrics: With the Reserve Bank now confirming an inability to cut the OCR further until early next year, it’s time to sit on our hands for a bit. But rising interest and exchange rates are likely areas of caution for the Bank, which will keep a close eye on market developments. We expect no change to the QE levels, but could see some more signalling of what thresholds need to be broken for additional RBNZ intervention.

Alfred Guender, University of Canterbury: The road ahead is highly uncertain. The RBNZ has done all it can for the time being. There is enough liquidity in the financial sector and both short-term as well as long-term interest rates are at record lows. The stage is set for a recovery. Where we go from here depends on private-sector decisions, fiscal spending, and, importantly, on what happens to the world economy.
Ashley Church, ashleychurch.com: There’s simply not enough data on how the post-COVID economy is tracking, or is likely to track, to have a definitive view on this yet. Meantime – expect rates to be held where they are for at least a couple of months.

Sharon Zollner, ANZ NZ: We are forecasting an unchanged OCR at least out to the end of 2022.
Leonie Freeman, Property council New Zealand: The cash rate is likely to remain as it is for some time yet, and difficult at this point to predict when that might change.

Donal Curtin, Economics New Zealand Ltd: RBNZ appears reluctant to go to 0% OCR so most likely is very extended period at 0.25%, with a wild-guess estimate of first hike sometime in 2022 assuming COVID stays dealt to and recovery has gone well.

Jarrod Kerr, Kiwibank: I think the RBNZ should opt to expand the LSAP program, or provide term lending to banks, as a more effective way of lowering retail deposit and lending rates. Further rate cuts into negative territory would be fraught with unnecessary risks. Therefore, I hope the next move in the OCR is up, not down. Although any move higher in the OCR is highly unlikely this year, or next.

Bindi Norwell, REINZ: The Reserve Bank may wait for a few months to assess the impact of the previous rate cut of 0.75 in March 2020.

Kelvin Davidson, CoreLogic: A further OCR cut into negative territory can’t be ruled out in early 2021, but the quick emergence into alert level one might shorten the recession and/or keep it shallower – so the chances of a negative OCR may have reduced slightly. There’s some kind of chance that the next OCR move could be upwards, but not for a long time!

Dr Oliver Hartwich, The New Zealand Initiative: The RBNZ has signalled it is prepared to take the OCR lower if needed, even into negative territory, so we can expect this to happen. I would not be surprised if they made that move at their next meeting.

Michael Reddell, Croaking Cassandra: The economy needs the additional support negative interest rates would provide, but the MPC seems wedded to the absurd March commitment not to change before next March. That delay, in turn, will further put off the time when the economy can support a higher OCR.