10 February, 2020, New Zealand – Sufficient economic growth and softening inflation levels are giving the Reserve Bank of New Zealand little reason to cut the official cash rate (OCR) this month, according to many of New Zealand’s leading experts and economists.

When asked if the Reserve Bank will lower the OCR on Wednesday (12 February 2020), 100% of the panellists agreed that it will likely remain on hold at 1.00% this month.

“With inflation currently at 1.9% and economic fundamentals looking solid, there is no immediate need for the RBNZ to act.

“However, I would not rule out a decrease later in the year in response to a likely deterioration of global economic circumstances,” he said.

Alfred Guender, associate Professor at the University of Canterbury, said that most central banks are taking a “wait and see” approach to the cash rate.

This sentiment is echoed by over a third of the panellists: 14% are predicting a rate cut in May or June, while 23% believe the cash rate will be lowered in August.

What’s in store for the economy

When asked about their major economic concerns for the year ahead, most of the panellists were quick to point out a slowing global economy (77%), the impact of coronavirus (62%) and the flow-on effect of US–China trade tensions (38%).

Independent economist Michael Reddell said the economic implications of coronavirus may be even greater than the fallout of the SARS epidemic in 2003.

“Globally, things have been pretty subdued and the effects of coronavirus (even if contained in the next couple of months) will be materially larger than SARS, a factor for the RBNZ in 2003 when making OCR decisions.”

Kevin McHugh, Finder’s head of publishing in New Zealand, said: “It should be interesting to see how global economic forces play out in the coming months. Coronavirus will no doubt have an impact on tourism and sentiment, not only in New Zealand, but the rest of the world too.

“Given the current circumstances, a rate cut is highly likely by the end of the year,” he said.

House prices to rise by up to 6%

Experts and economists predict that property prices will increase even further throughout the coming year.

Panellists were asked how much they expect prices to change in 2020, following the recent upward trend which saw record-breaking median prices across the Northland, Southland, Tasman, Taranaki and Manawatu–Whanganui regions.

Dunedin is followed closely by Auckland and Wellington at 5%. The experts also forecast prices to increase by 4% in Christchurch.

With property price increases on the cards, sentiment towards housing affordability in the year ahead is negative from all experts and economists surveyed.

Experts are divided on their outlook for employment prospects with an equal number of positive and negative responses; 31% are feeling positive about wage growth. 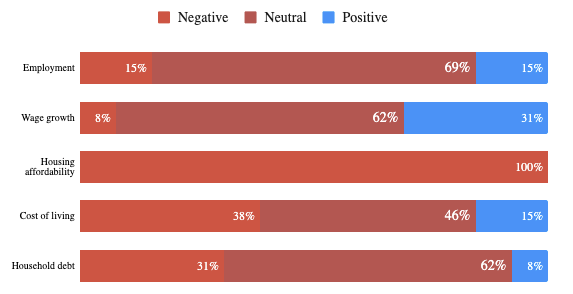 Debbie Roberts, Property Apprentice: With the property markets showing clear signs of recovery in Auckland and Hamilton (and ongoing strength in many other regions across the country), it is unlikely that the RBNZ will reduce the OCR unless we enter into a recession. The general election later this year will no doubt take some of the heat out of the property market, but as this is likely to only be a temporary effect, I don’t think the RBNZ will adjust the OCR until mid-2021.

Brad Olsen, Infometrics: At present, we expect the Reserve Bank to maintain the OCR at its current level, with the potential for a raise in May 2020 if economic conditions permit. Although the Reserve Bank has noted it is waiting to see the full impact of the 50 basis point cut in 2019, we expect that the Reserve Bank may be required to further loosen monetary policy to combat global growth headwinds.

Dr Oliver Hartwich, The New Zealand Initiative: With inflation currently at 1.9% and economic fundamentals looking solid, there is no immediate need for the RBNZ to act. However, I would not rule out a decrease later in the year in response to a likely deterioration of global economic circumstances.

Leonie Freeman, Property Council New Zealand: I believe the RBNZ will hold the OCR as it is for 2020.

Donal Curtin, Economics New Zealand Ltd: Since last November’s MPS, inflation has been a bit higher than expected, and the local and global economies look a bit stronger. The Bank didn’t move last time: it has even less reason to cut now, and it would be way too premature to raise. Hold likely.

Michael Reddell, Croaking Cassandra: Core inflation is still below target and domestic demand growth will be sluggish at best. Globally things have been pretty subdued and the coronavirus (even if contained in the next couple of months) effects will be materially larger than SARS, a factor for the RBNZ in 2003 OCR decisions.

Jarrod Kerr, Kiwibank: I think the RBNZ will give the economy one more boost to ensure they meet their dual mandate. A little more tinkering with rates will ensure the bank capital impact is negligible and confidence is bolstered into 2021.

Kelvin Davidson, CoreLogic: My central expectation right now is that rates won’t go up or down in 2020, and perhaps flat again in 2021 too. I’ve indicated a rate rise next year as a sign of the long-term trend.

Sharon Zollner, ANZ NZ: There is increasing evidence that growth will be sufficient to deliver on the RBNZ’s growth and employment objectives without further monetary stimulus, with the housing market lifting strongly and inflation pressures rising.