Melbourne, the countdown is on to ring in the New Year. Here's how to do it in style.

New Year’s Eve is knocking on your door. To inspire you to start 2020 off with a bang, we’ve rustled up the best restaurants with views of the fireworks, tickets to the hottest parties and cruises on the river to celebrate at.

Plus, we’ve also got the lowdown on rooms to book to crash when the night has come to an end.

Melbourne welcomes two sets of fireworks; a family friendly set at 9:30pm at Yarra and Footscray Parks and midnight fireworks along the river.

The 2019/2020 fireworks haven’t been announced yet but the schedule and vantage points don’t typically change. To give you an idea of where you should be this year, here were the official sites where you could watch the midnight fireworks from on New Year’s Eve in Melbourne. Just click on the viewing areas on the map to see what time the fireworks began:

Unofficial viewing area with no food for sale

Top eats with views of the Melbourne skyline to capture that picture-perfect shot at midnight.

Cruises along the Yarra River and Port Phillip Bay are available on New Year’s Eve and you can get a whole different perspective of the midnight fireworks than you would on land.

Celebrate the New Year in style with a Yarra River party Cruise.

What to do on New Year’s Eve in Melbourne: Top NYE events and parties

Grab your golden ticket to the biggest parties to close out 2019. 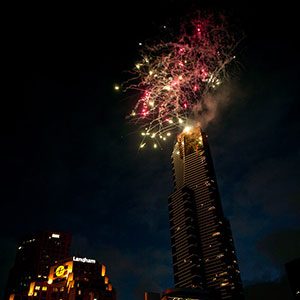 Hotels in Melbourne for New Years

Searching for a room with a view on New Year’s Eve in Melbourne? Check out our Finder.com.au picks for where to stay or search below to compare rates at more Melbourne hotels.