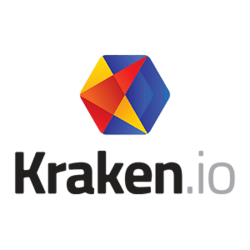 Optimise your website’s images with Kraken

Kraken.io is an image optimiser and compressor Software as a Service (SaaS) that takes on the task of automatically shrinking the byte size of uploaded images while maintaining their quality. It has multiple pricing levels, add-ons and plug-ins available. Based in Berlin, Kraken.io is employed by global brands including Microsoft, Tesla and Dell. The most popular package offers 5GB of images per month for about US$19.

The most-used feature of Kraken.io is its image optimisation application program interface (API). It takes images in one of two ways – either through an already-existing URL or by uploading a file to the API. Kraken supports the following image types:

The API also handles image resizing – which is excellent for sites working with thumbnails or offering preview images – as well as generating up to 10 separate sizes from one single image, a process known as multi-resize. Kraken offers its customers the choice of lossy or lossless image compression. Lossy drops the weight of a file 50–60% on average without a noticeable difference in visual perception. Lossless image compressions drop the file weight by 15–20%.

For businesses with more specific needs, Kraken.io offers more specialised and targeted functions. These include:

Kraken offers five pricing plans which can be paid monthly or yearly. Paying yearly gives you two free months of service. All plans give the customer Full API Access, Web Interface PRO, WordPress Plugin, Magento Extension and Kraken Cloud Storage. All plans offer the first 100MB of images free of charge and no credit card is required for initial signup. Prices are as follows in US dollars:

Pros and cons of Kraken.io

In a crowded field of image optimisation, Kraken.io carves its niche by being quick and easy to use. On the flip side, its pricing structure can be confusing and escalates quickly.

Was this content helpful to you?
Thank you for your feedback!
Collaborate anywhere with Zoom Create professional video content with Wistia

Who will win in the PS5 vs XSX video game console war? We compare the PlayStation 5 and Xbox Series X, including specs, design, controllers and games.

Learn about some of the top online course platforms that make it easy to create, deliver and sell your lessons.

Needing a new website for your business, side hustle or passion project? Wix offers hundreds of templates with drag and drop features.