From Times Square to Copacabana Beach, here's where you need to be to kick off the new year with a bang.

Update on New Year's celebrations around the world

Due to the coronavirus (COVID-19) pandemic, many New Year’s Eve events, including fireworks, have been cancelled around the world.

International travel may also be banned for your country.

If you are planning to travel, check with the official city or tourism board website before visiting these destinations to avoid disappointment.

Feel like you need a change of scenery on 31 December? We hear you.

That’s why we’ve collated this list of the most exciting New Year’s Eve party destinations around the world for you to ring in the new year. 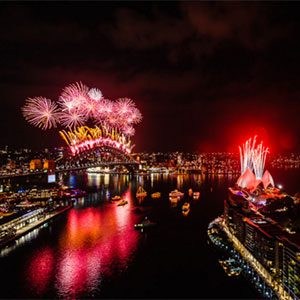 Broadcast around the world as one of the first places to ring in the new year, Sydney sets the bar high for New Year’s Eve parties with around $7 million worth of fireworks exploding off barges and the Harbour Bridge yearly.

Not only is it one of the first cities in the world to celebrate New Year’s Eve, it’s typically also one of the largest. In 2018, over one million lined the harbour foreshore for a view of the sparklers.

This year (2020) it’s a more pared back affair with limitations on who can go into the city. Nevertheless the midnight fireworks are still going ahead, restaurants are hosting events, cruises will be on the water and hotels in the city still have rooms to spare. 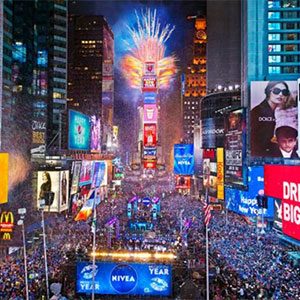 What better place to ring in the new year than in the city that doesn’t sleep? Surrounded by the bright lights of Broadway, the biggest names in music and entertainment and over one million people, Times Square in New York City is the place to be on New Year’s Eve.

Musical performer Gloria Gaynor will be there front and centre to wind up the crowd before the ball drops at midnight.

Special guests on the night will be the Heroes of 2020 – a lineup of first responders, frontline and essential workers who have worked tirelessly this year to keep the country safe. 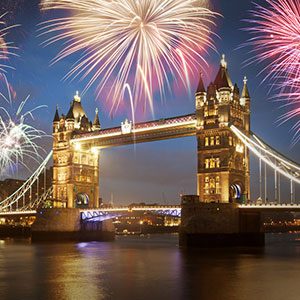 As the city is in lockdown over New Year’s Eve in 2020, London’s fireworks and any celebratory events on the night have been cancelled this year.

Typically though you can expect a splash of fireworks behind some of England’s most notable buildings. More than half a million people attend the eight-minute fireworks display along the Thames making it one of the hottest ticketed events on the calendar. In true Brazilian fashion, New Year’s Eve in Rio de Janeiro is one big party on the beach.

The mid-summer festivities along the four kilometre stretch of sand are filled with samba music, sprays of champagne and a massive 20-minute fireworks display enjoyed by two-million revellers on the beach and on cruise ships.

Due to the pandemic, the celebrations are going virtual this year with an online broadcast of artists performing in remote, inaccessible locations across the city to reduce crowding. A light show will also replace the fireworks display at midnight. 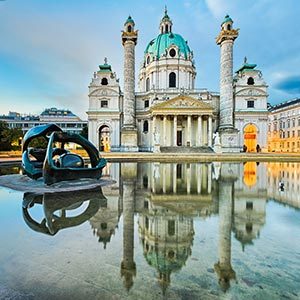 Awash with culture and dressed in architectural wonders, the capital of Austria is beautiful to visit whatever time of year.

This year, all New Year’s Eve events, including mass gatherings and fireworks displays, have been cancelled. However here’s an idea of of what to expect in 2021:

For New Year’s Eve, the Old City transforms into a street party complete with gala events, dancing and, in true Viennese fashion, operas and operettas.

The entertainment runs from 2pm to 2am with the highlight being the fireworks at the City Hall Square as well as the Prater at the stroke of midnight.

Not only does the city know how to party by night, it also knows how to recover by day, featuring a brunch and performance by the Vienna Philharmonic on New Year’s Day. This is displayed on a big screen in front of City Hall at the bleary-eyed time of 11.15am on 1 January. 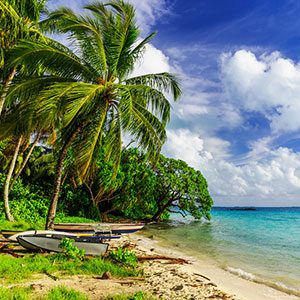 Kiribati is a tiny nation that consists of 33 atolls and islands. It’s scattered across 3.5 million square kilometres of the South Pacific and is home to less than 100,000 people. Just west of the International Date Line, the Line Islands and Kiritimati are the first places in the world to celebrate the new year.

It’s not an easy place to get to, so don’t arrive expecting big-city parties. You’ll be spending the first day of the new year surrounded by sandy beaches, blue lagoons and swaying palms.

If you’d like somewhere a bit more on the beaten path, Samoa switched to the same time zone as Kiribati in 2011. Hogmanay is the name of Edinburgh’s massive New Year’s Eve celebration. It in, the Scottish capital hosts a three-day bender of traditional events and live entertainment.

Any other year the bill would include a torchlight procession where over 40,000 revellers carry torches through the Old Town creating a river of light toward a fireworks finale on 30 December.

Then, on 31 December there would be candlelight concerts, a traditional ceilidh of dancing and music. Plus, that midnight moment when the clock ticks over and the fireworks crack the night sky.

Sadly, none of that is happening in 2020. But there will be an online celebration across the three-day bender of entertainment. Hosted by the “Doctor” AKA David Tennant the lineup includes award winning poet and Scottish Maker Jakie Kay, a Celtic fusion band and Niteworks. 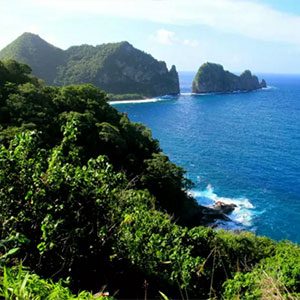 Had a good year and want to savour every last moment? Then American Samoa is the place to do just that.

Not to be confused with Samoa, which is 80km away on the other side of the International Date Line, American Samoa is one of the last places to celebrate the new year, 23 hours after Samoa.

American Samoa has roughly half the population of Kiribati, and only about 3,500 people living in its capital Pago Pago. It’s not somewhere you come expecting a huge party and epic fireworks displays. Instead, start the new year on a peaceful, lush and tropical island. 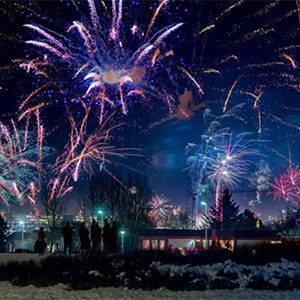 There are no official celebrations or fireworks displays for the new year in Reykjavik, but the locals don’t care. On the eve of the new year, hundreds of thousands of revellers create their own explosion and light up over 500 tonnes of fireworks.

Don’t expect to saunter out at a minute to midnight to catch them, either. Icelanders aren’t too fussed about time and light up the night sky from around 9pm onward – so get out early to check them out. The best bit? You won’t have to push through throngs of crowds to nab the best seat in the house. 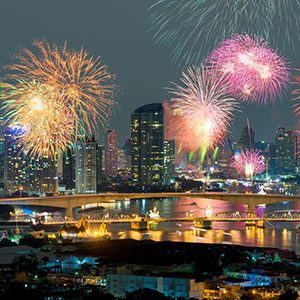 Bangkok presents a more local celebration for those who wish to ring in the new year outside of Australia but don’t wish to venture far or overspend during the holidays.

Each district offers a different atmosphere of live entertainment and street parties. The biggest is undeniably at Bangkok Central Square where musicians play all night alongside light shows, a beer garden and projection screens to help you keep and eye on the countdown.

But if you really must catch that fireworks, the official showstopper will be along the Chao Praya River with a the countdown at ICONICSIAM’s River Park.

Due to the pandemic, Las Vegas’ typical night of partying along The Strip has been cancelled for New Year’s Eve.

Instead, there will be a livestream countdown where a giant 2020 sign will be lit up and set to the skies. As the fireworks are set off a 2021 sign will take its place in celebration of the new year.

If you thought Vegas already had an anything-goes vibe, wait until New Year’s Eve.

The Strip is closed to traffic, hundreds of thousands of people party in the streets and fireworks make the sky shimmer from just about every angle. About half a dozen hotels host the shows that see about 80,000 fireworks light up the sky.

If partying in a club on New Year’s Eve is more your thing, Vegas has plenty of options. Most hotels along The Strip have venues that pump all night long, including Planet Hollywood, Caesars Palace and the Palms. 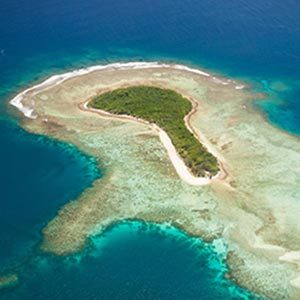 Seeing the fireworks from the harbour is one thing, seeing them on the open ocean is another.

A number of cruise ships set sail for New Caledonia and Vanuatu (cancelled for 2020) over Christmas and New Year’s enabling you to celebrate in style on the ocean bound for exotic lands.

While the islands themselves may not boast the largest celebrations, cruise ships aren’t beyond throwing a celebration of their own with music, dancing, a countdown and drinks packages. 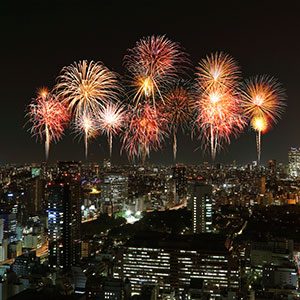 Tokyo isn’t on this list because of its millions of residents, huge party scene and a knack for late nights.

The Japanese do New Year’s Eve a little bit different. Locals partake in hatsumode, which is the first visit of the new year to shrines and temples. Temple bells ring and food stalls are set up at the city’s most popular shrines, including Meiji Shrine and Sensoji Temple.

If it’s bright lights and a party scene that you’re after, check out the four-day Makukahri Messe festival or throw shapes at Tokyo’s largest nightclub New Real Experience. Contrary to its namesake, the city of lights isn’t known for its fireworks displays, although you will find those too.

In fact, up until a few years ago, it didn’t have any official New Year’s Eve events, but that didn’t stop Paris from being a popular tourist spot.

The Champs Elysées is a magnet for crowds searching to celebrate on the famous Parisian street near the Arc de Triumph.

If you’re looking for more glitz, the Eiffel Tower dazzles in lights at the stroke of midnight. This can be seen close or from vantage points around the city.

Due to the pandemic, many cultural venues are closed over New Year’s and have decided to celebrate online through streamed events. Our pick? This Notre-Dame Virtual Concert which starts at 11:25pm Paris Time.

The only guide you’ll need to sail Croatia