McDelivery in 5,000 US stores by year's end | finder.com
Advertiser Disclosure 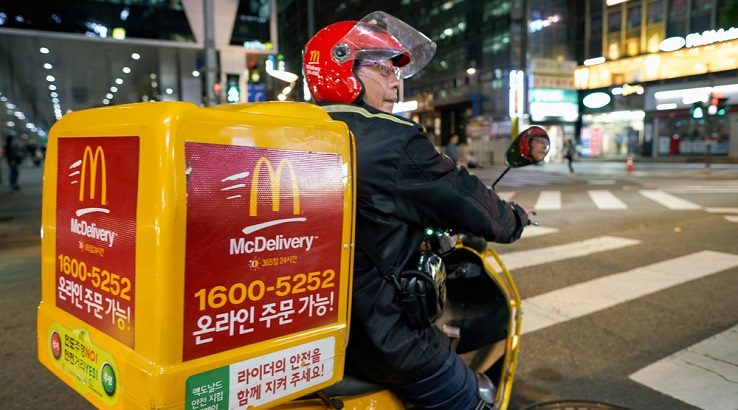 The takeaway giant is increasing its stateside delivery capabilities by more than one third.

The number of McDonald’s stores in the United States offering delivery will rise to 5,000 by the close of 2017.

CNBC reports that during an earnings call this week, McDonald’s USA president Chris Kempczinski said the popular fast food restaurant chain would be placing a focus on developing its US delivery business.

“We’re learning a lot about delivery and seeing success in dense urban metros with commerce, like New York, Boston, Miami and Los Angeles… I truly believe we’re just beginning to scratch the surface,” he said.

Earlier this year, McDonald’s president and CEO Steve Easterbrook announced that McDelivery service on the UberEATS app would allow the chain to offer delivery services from 3,500 restaurants by the end of June 2017.

McDonald’s currently provides delivery service from around 3,700 of its restaurants in the United States, with plans to intensify these operations by more than one third (35%) over the next two and a half months.

Easterbrook said McDelivery was resonating well with younger customers and that well over half (60%) of all orders were placed during the evening or late night, being delivered in less than 30 minutes, on average.

Almost 75% of people live within three miles of a McDonald’s in the company’s five largest global markets.

In parts of Asia, such as Thailand and South Korea, McDelivery represents a significant proportion of sales.

Kempczinski said McDonald’s plans to offer delivery services in 10,000 restaurants globally by the end of 2017.

McDonald’s is one of the world’s leading food retailers, with more than 36,000 locations in over 100 countries.

In August, Ford and Dominos partnered to test an autonomous pizza delivery system in Ann Arbor, Michigan. Delivering up to four pizzas and five sides, cars are code-locked to deter any potential pizza-jacking en route.