What is Monero? A step-by-step guide to XMR

The problem with public transactions

Bitcoin is built over what is known as the public ledger, or blockchain. This was done so that users of bitcoin can verify other people’s transactions, especially in cases where these payments need to be transparent (eg, government spending and not-for-profit organisations (NPOs).

Bitcoin did come up with somewhat of a temporary solution or a user guideline, so to speak. The idea is that whenever you’re requesting money from someone you should always provide them with a temporary wallet address. This address is related to your actual wallet but would be a one-time-use address and then will be destroyed, making it harder to trace your wallet’s main address back to you. This solves the problem for one-off payments, but organisations and businesses who want a public address visible on their website, for example, would still have all their transactions traceable back to them.

As with many other cryptocurrencies, Monero is currently enjoying growth. Starting at US$47.628 on 19 August 2017… 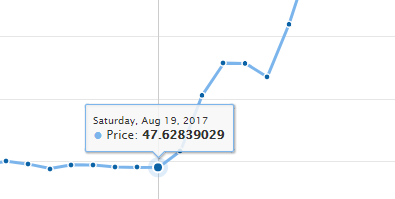 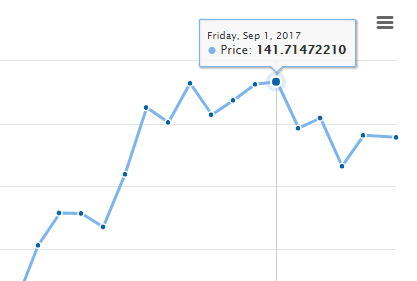 If you’d like to invest in Monero, you may want to buy some XMR from your favourite exchange and hold onto it. The price doesn’t seem to be going down anytime soon.[/fin_hide]

The best way to make money from a cryptocurrency is to buy it, provided you are satisfied that it’s the best plan for you. Buying XMR and paying in XMR should help the currency grow, and when the currency grows, your wallet should also increase in size.

If you’re investing in cryptocurrencies in order to make money and little else, then understanding the way currency trading works (including things like FOREX) is imperative.

Say that 90 days ago you wrote an article for a business and they decided to pay you in Monero (XMR). 90 days ago, 1 XMR cost US$55.30. You wanted to get paid US$60 for your article, so you charged the business 1.08499 XMR. This amount goes into your wallet and you move on.

Congratulations! You just bought cryptocurrencies and more than doubled your money!