You Graduated. Now What?

Get ready to jump through quite a few hoops. 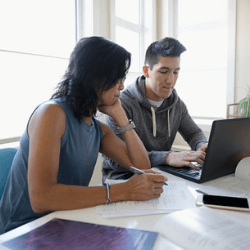 The difference between in-state and out-of-state tuition at public universities was around $16,000 during the 2018–2019 school year, according to a College Board study. If you’re looking to qualify for that lower price tag, you’ll need to prove you intend to be a permanent resident of the state long after you graduate.

What do I need to do to qualify for in-state tuition?

To qualify for in-state tuition, you’ll need to establish residency. While the process can take anywhere from six months to two years, you typically need to:

Live in the state

To get in-state tuition, you’ll need to live and work in the state where you want to attend college. Most states require you to live in state for at least 12 months — consecutively. You likely won’t be able to go home for summer breaks, and taking long vacations out of state could potentially disqualify you.

You can prove residency by taking some of the following actions:

You must prove your intent is to live in the state long term, not just for your education. You can do this by joining local civic groups, professional organizations and clubs. Getting a new driver’s license and registering to vote are also smart moves. Some states may even allow you to write a letter that explains your intent to live and work as a resident after you graduate.

States differ on what they consider financial independence, but it usually involves students filing their own taxes. Some states allow you to be claimed as a dependent and will still consider you financially independent if you pay for the majority of your schooling yourself, while others may not grant in-state tuition if you receive financial help.

If you’re an older student or file your taxes as an independent, you may not have to worry about this step. Still, you’ll want to contact your school of choice to make sure your status as an independent qualifies you for in-state tuition.

How else can I save money on an out-of-state school?

If you’re not able to make the move and cover the expenses of living independently for a year just to get in-state tuition, there are a few things you can do to reduce the cost of attending school as an out-of-state student:

8 tips for applying to college out of state

Qualifying for in-state tuition isn’t difficult, but you’ll have to be willing to make a few sacrifices. That begins with moving to the state at least six months before you plan on enrolling in school. And taking steps to stay there after you graduate.

You can learn more about how to pay for college with our guide to student loans.

Kellye Guinan is a writer and editor with Finder and has years of experience in academic writing and research. Between her passion for books and her love of language, she works on creating stories and volunteering her time on worthy causes. She lives in the woods and likes to find new bug friends in between reading just a little too much nonfiction.