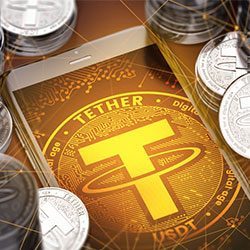 Beyond 2021: What does the future hold for Tether? Was this content helpful to you?
Thank you for your feedback!
How to buy, sell and trade Tether (USDT) Best wallets and strategies for storing Tether (USDT)

A beginner’s guide to cryptocurrency ETFs

If you’re looking for ways to gain exposure to bitcoin and other digital currencies, cryptocurrency ETFs could be worth exploring. Find out what crypto ETFs are and how they work in this introductory guide.

Where is the price of Dogecoin headed in 2021 and beyond, and what are the factors affecting the value of this iconic cryptocurrency?

What is a stablecoin?

A comprehensive overview of cryptocurrency stablecoins, including how they work, what they’re used for and why they’re important.

Bitcoin loans offer a new and decentralised way to access personal financing. Find out how these loans work in our guide to cryptocurrency lending and borrowing.

If you want to buy or sell digital currencies on the Liquid crypto exchange, check out our review of its fees, features and payment methods as well as its pros and cons.

How to buy Power Ledger (POWR)

If you want to know how to buy Power Ledger (POWR) tokens using either EUR or cryptocurrency, you’ll find the help you need in this comprehensive guide.

How to buy and sell High Performance Blockchain (HPB)

Want to know how to buy and sell High Performance Blockchain tokens (HPB)? Find out in this handy guide.

Check out our comprehensive Trust Wallet mobile cryptocurrency wallet review if you’re looking for a popular wallet that lets you hold your own private keys.