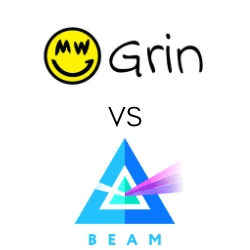 Grin vs Beam: How do they compare?

The Mimblewimble privacy protocol was conceived in 2016, but it wasn’t until 2019 that live and operational cryptocurrencies started using it.

These two anonymity-oriented cryptocurrencies are Grin and Beam.

They’re more similar to each other than to anything else, but are still very different.

Skip ahead: Where can you buy Grin or Beam?

Grin vs Beam: The breakdown

Where to buy Grin and Beam

Grin vs Beam: How do they work?

Both Grin and Beam were built on top of the Mimblewimble privacy protocol. This is essentially a set of techniques and functions which underpin both coins.

It imbues both coins with anonymity at several different levels. Through their use of Mimblewimble, both coins have:

Both Grin and Beam were built on top of an identical Mimblewimble foundation.

But from there they each went their own way, adding modifications and pursuing different goals.

The differences between Grin and Beam

The developers of Grin and Beam envisioned different purposes for each coin which in turn gave each a different origin story.

Although both coins are designed to facilitate the private transfer of monetary value, they have different visions of what practical privacy means in the real world.

In the Grin network, privacy is mandatory, always on and cannot be switched off.

All transactions are private, all users are hidden and the entire network is geared towards the normalisation of complete anonymity.

Beam is designed for selective privacy. The goal is to create a system that can simultaneously offer users anonymity when needed, while also allowing the optional tracking of transactions and users where needed.

The goal is to create a more regulator-friendly privacy coin that can offer additional privacy without stepping on the toes of lawmakers.

One of the main differences is in the origin of each coin, and the communities that grew around them.

Grin was built in the perceived image of the Mimblewimble creator, an anonymous cryptographer who went by the pseudonym of Tom Elvis Jedusor. The name is a reference to a character from Harry Potter.

While some prominent figures, such as Andrew Poelstra, have publicly joined up with Grin, its development is driven largely by anonymous volunteers, many of whom also sport Harry Potter-inspired pseudonyms.

It’s reminiscent of the development of bitcoin, under the pseudonymous Satoshi Nakamoto, which has attracted a lot of supporters.

Beam is the name of a cryptocurrency, as well as the Israeli-based startup which brought it to life with the help of investment from a range of venture capital firms.

The plan is for the Beam company to eventually see control of the network to the general public.

The different visions and different communities that grew around each coin informed the functional differences between them.

Wallets for Grin and Beam

To use a wallet for both Grin or Beam you will need to download and synch a full node. On Beam this is easy and largely automatic, but on Grin this is a difficult and largely manual process.

Pros and cons of Grin and Beam

Grin vs Beam: The bottom line

Grin and Beam both started off from identical Mimblewimble foundations, but ended up going in very different directions.

But both are still dedicated to the same purpose, as a valuable tool to help retain privacy and freedom in a world of data harvesting and digital scrutiny. This is an increasingly pressing issue in today’s world, but it’s also a very complex one.

That’s why both Grin and Beam can be so similar, yet so different, and both filling a valuable niche. It’s because it’s good to have a diverse set of options in unpredictable circumstances.

No one knows what the future holds, but it’s nice that both Grin and Beam are along the ride.

Was this content helpful to you?
Thank you for your feedback!
What is blockchain technology? Blockchain smartphone guide