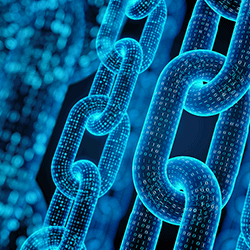 What is blockchain technology?

How blockchain works, who’s using it and why it’s much more than just Bitcoin.

Blockchain is being heralded as a revolutionary new technology. But beyond its use in cryptocurrency, very few people understand what they can use it for or what industries it could change. This guide aims to demystify blockchain technology and explain what it is, what it’s used for, how it works and where its future might be.

In essence, a blockchain is a database where you can add information, but not remove it. The data stored on a blockchain can be anything, including money (such as Bitcoin), insurance claims or even shares of physical property such as real estate. Instead of being stored on a single server, the database is spread out and stored on a vast network of computers known as nodes. This means that the system is distributed and that there is no central point of failure.

Because of the decentralised nature of a blockchain, it means that there is no one single entity with the power to change the state of the blockchain ledger and do things like shut down accounts or seize funds, unlike banks.

Another problem that blockchains solve is the issue of trust.

When parties make a transaction via the blockchain, they only need to place trust in the underlying infrastructure of the blockchain rather than in each other. Since a decentralised computer network can record and verify each transaction as well as make the transaction transparent, trust is created by default.

This means that a blockchain allows for “trustless” transactions. The transacting parties do not need to worry about trust because they give total trust to the network. In other words, using a blockchain means putting your trust in computers, rather than people who might have bad intentions or might simply make a mistake.

How does blockchain work?

A blockchain works by keeping an unchangeable (immutable) record of transactions. It does this by reaching a consensus between all the computers, or nodes, on the network. Because blockchains consist of a distributed network of computers with no central authority, the majority of the nodes must agree to any addition to the blockchain (i.e. adding the next block). No one party can make any changes, which is what makes a blockchain a decentralised system. The more nodes that join the network, the more decentralised it becomes, which in turn improves security.

Consensus refers to the agreement between the nodes on the blockchain’s true state of affairs. If one node tries to lie, then its record of the blockchain won’t match that of the other nodes, and it will be automatically ignored. This system of consensus is fundamental to the security of the blockchain.

You control your personal data on a blockchain by using private keys. A private key is like a lengthy password that gives you access to a digital wallet where your personal data is stored. This data could be anything from money to details about your last medical check-up. The benefit of a private key is that it doesn’t have to be stored on a central server, unlike passwords for regular websites like Google or Facebook, which are prone to hacks.

What problems does blockchain solve?

On a trustless network like a blockchain, you can ask for payment from someone you have never met, and when the payment arrives, you can be sure that it is legitimate and verified, all within a matter of minutes. Existing systems such as the SWIFT banking network currently take two to three days to do this.

Another issue blockchains solve is the double-spend problem. The double-spend problem basically centres around the idea that on a database, someone can make an entry and then go back and change it if they have the power or authority to do so. This would essentially allow someone to spend the same money twice.

Blockchains solve this through a combination of factors that all prevent double spending:

What else can a blockchain do?

Blockchains belong to a group of technologies known as distributed ledger technologies (DLT). DLTs as we know them today have only been around for a decade or so, but are already receiving a lot of attention and development. Much like the Internet, additional protocols and technologies are being built on top of blockchains to further their abilities.

Let’s take a look at some of the most popular ones used today.

Despite the world’s first distributed blockchain being a public affair, several companies have entered the space and found ways to commodify the technology, leading to the creation of permissioned private blockchains.

Private blockchains differ to public blockchains in that the nodes which operate and secure the network are privately chosen. This means that the network is effectively centralised, due to the ownership of nodes by a single entity or a consortium of private parties.

Blockchain purists argue that this goes against the fundamental purpose of a blockchain, which is to be decentralised. Because decentralisation is a cornerstone of blockchain security and integrity, the argument is that by centralising all the nodes there is almost no point in running a blockchain.

Private blockchains, of course, have a place; otherwise, people wouldn’t use them. Despite the concerns around centralisation, they are often faster and can process more transactions per second than public blockchains. Furthermore, the organisations using them may have less need for the benefits that a decentralised network confers.

So as you can see, public and private blockchains each come with their own set of strengths and weaknesses, which again differs depending on the particular blockchain at hand. Therefore companies, developers and users must choose which system they would prefer to run, depending on the task at hand.

Anyone can create a blockchain, although certain blockchains are more popular than others. Bitcoin was the first public blockchain created, and it was designed for the transfer of wealth without a trusted third party. Since then, many different developers, companies and hobbyists have created their own blockchains for all sorts of purposes.

Enterprises are now using those blockchains (both public and private) to improve the way they do business, often cutting out the need for previously required roles, speeding things up and making business cheaper.

Let’s take a look at some of the biggest companies using or exploring blockchain technology this year.

Identifying issues with blockchain technology really depends on where you sit and the particular blockchain. Critiques often revolve around speed, issues of centralisation (or decentralisation), adoption, complexity and privacy. Some of these issues have fairly simple solutions, such as choosing a private blockchain to increase privacy or creating a new interface to improve usability.

However, the one major issue that several of these smaller issues contribute to is the issue of scalability.

Scalability refers to the ability (or lack thereof) for blockchains to scale as more users join the network. As more users join, speed and size (bandwidth) needs to increase in order to process all the new data being added. Currently, blockchains struggle to do this without making a trade off in other areas, namely decentralisation and security.

This three-way trade-off among scalability, decentralisation and security has become known as the Blockchain Trilemma.

The Blockchain Trilemma refers to the existing problem in blockchains where any improvement to scaling, decentralisation or security cannot be made without a detrimental impact on at least one of the other two. Many blockchains have tried to solve the trilemma, only to improve in one area but lose out in another.

This is currently one of the biggest issues with blockchain technology, and cited by many as the reason why blockchains have not replaced existing systems like Visa and SWIFT for payments.

James is a cryptocurrency writer for finder. He has a background in psychology and UX design which drives his interest in human behaviour, particularly the errors made when trying to navigate volatile marketplaces.

Was this content helpful to you?
Thank you for your feedback!
How to buy Bitcoin without ID in Indonesia Grin vs Beam: How do they compare?