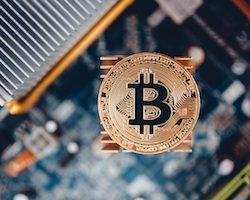 Bitcoin mining: Can I make money doing it?

Bitcoin mining is an interesting way of trying to make a few Bitcoin tokens on the side, but it also serves a very important purpose in maintaining and keeping the Bitcoin blockchain secure.

Unlike regular fiat currencies (such as US dollars or euros), Bitcoin assets are not controlled by a central government or bank, and new Bitcoin (BTC) cannot be printed and issued like paper money. Instead, Bitcoin tokens are introduced into the market via a process known as “mining”. BTC are awarded to the miners who have solved the math problems necessary to verify Bitcoin transactions.

In this guide, we’ll look at how mining works, why it’s a necessary component of Bitcoin infrastructure and whether it’s a good way of making a buck.

Cloud mining will almost never be profitable. This is because the “break-even point,” where you make as much money from cloud mining as you put into it, will keep moving backwards and you’ll typically never be able to reach it.

The reason it moves back is because Bitcoin mining difficulty tends to rise over time, especially as Bitcoin prices do. This means the amount of Bitcoin you get from cloud mining will usually decrease over time, which pushes back the break-even point. Bitcoin mining difficulty will usually only drop if Bitcoin prices do, but if that happens then your Bitcoin is worth less, which also pushes back the break-even point.

As such, even if a cloud mining contract looks like it will be profitable, you’re still more likely to lose more than you earn.

In the rare cases where a cloud mining contract turns out to be profitable, it will have been more profitable to simply buy cryptocurrency instead of cloud mining.

Where to buy cryptocurrency

Whenever a transaction is made in Bitcoin, a record of it is made on a block containing other recent transactions, like a page in a ledger. Once the block is full, Bitcoin miners compete against each other to verify and validate the block and all its transactions by solving a complex cryptographic problem.

The first miner to accomplish this is awarded a set amount of Bitcoin, based on the mining difficulty at the time. The verified block is then added to the blockchain, a history of all blocks verified since the beginning of Bitcoin, and transmitted to all users of Bitcoin so that they can have the latest blockchain.

For a more detailed explanation of the blockchain, check out our guide here.

So how does it work?

SHA-256, the mining algorithm used by Bitcoin, is a one-way cryptographic algorithm. When you pass a word through SHA-256, you will be given back an unrecognisable string of letters and numbers called a “HASH”.

With this information, we can now start piecing together the mining process.

Bitcoin mining involves three variables: the block, the mining difficulty and a random number. Here’s how it all comes together:

Imagine our block consists of the word “BUTTERFLY” discussed earlier. In reality, the block would contain a list of recent, unverified transactions, but let’s keep it simple. In order for the block to be solved, Bitcoin uses a deceptively simple test: If the HASH result of the block starts with a certain number of zeros, the block is considered verified. This number of zeros is the “mining difficulty” and is increased as more miners join the Bitcoin network. For our example, let’s say that we have a mining difficulty of just two, ie, our HASH must start with two zeros.

The problem: “BUTTERFLY” will always return the same HASH, and it doesn’t start with two zeros. So what we need is the third variable, a random number (called a NONCE). We take this number, combine it with “BUTTERFLY”, and HASH again. If it doesn’t start with two zeros, we change the number and try again, and because changing one small number changes the whole HASH result, there is no way to predict the number we’ll need to solve this!

We repeat this process over and over until we find a number that, when combined with “BUTTERFLY”, gives us a HASH that starts with two zeros. That number is the solution to the block. Here are some tries:

This arduous process of randomly trying to find a number that gives the solution is what makes Bitcoin mining such a computationally expensive process, and as more miners join the network, the harder it gets. As of November 2017, a regular home computer working alone, ie, not an application-specific integrated circuit (ASIC) and not part of a cloud mining network, would take 2.7 million years to mine one block.

This has led to the rise of ASIC computers built specifically for mining and to an increase in cloud mining.

Evolution of the mining computer

Where do I store my mined Bitcoin?

Once miners receive Bitcoin, they are given a digital key to the Bitcoin addresses. You can use this digital key to access and validate or approve transactions.

You can keep these digital keys safe with a number of wallet options:

Making money mining Bitcoin is much more difficult today. The following are some of the issues contributing to this difficulty:

When discussing the feasibility of Bitcoin mining, an unexpected variable rears its head: power consumption. This catches a lot of prospective miners off-guard. After all, we rarely consider how much power our electric appliances are consuming. But computing hashes is a very intensive process, pushing whatever processor you’re using to the limit and to its maximum power consumption. So the question we have to answer is this: will the small reward you earn from Bitcoin mining be enough to offset the cost of power consumed?

If you’re using CPU/GPU/FPGA to mine, the answer is a definite no. As of November 2017, the BTC reward is so small that it doesn’t pay for the energy your computer will consume to verify a block.

This leaves us with pools, ASICs and cloud mining. If you’re not willing to put a lot of money into setting up a mining operation, your best bet could be to get a cloud mining rig. These are relatively low cost, require no hardware knowledge to get started, no extra electricity bills, and you won’t end up with a machine you can’t sell when Bitcoin mining is no longer profitable.

The rising costs of mining effectively and competing against large mining pools have made it harder for the hobbyist to profit on mining Bitcoin.

It’s virtually impossible to mine enough Bitcoin to recoup your initial cost of equipment and electricity. But if you’re not so concerned about making a buck, you could have fun panning for this cool currency.

Was this content helpful to you?
Thank you for your feedback!
Compare bitcoin alternatives: 10 top competitors Cryptocurrency airdrops calendar 2018