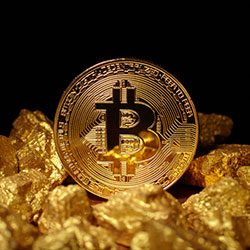 A guide to Bitcoin Gold (BTG)

Bitcoin Gold is a fork of the original bitcoin cryptocurrency, aimed at breaking down the bitcoin mining monopoly.

Mining has been a key feature of bitcoin and cryptocurrencies since the very beginning of bitcoin (BTC). The technology used for mining coins has been charging ahead in leaps and bounds, but the hardware has become expensive and prohibitive for most hobbyists.

Bitcoin Gold (BTG) aims to fix this monopolisation of mining by professional businesses by changing the algorithm used to solve blocks.

What is Bitcoin Gold?

Bitcoin Gold is a free, open-source cryptocurrency project developed by volunteer bitcoin enthusiasts. It was first announced on 23 October 2017 and launched on 12 November 2017.

How is Bitcoin Gold different from bitcoin?

In essence, Bitcoin Gold is very similar to bitcoin. They both have the same transaction-processing time of 10 minutes (i.e., it takes approximately 10 minutes to confirm a transaction after cryptocoins have been transferred) and they both have 21 million coins maximum supply (i.e., there will never be more than 21 million BTG in circulation).

Yet, there are some very important differences that we’ll review now.

Where bitcoin uses the SHA-256 algorithm to mine new blocks and transactions, Bitcoin Gold uses Equihash. Both are proof-of-work algorithms, meaning they require the miner to solve a hard cryptographic puzzle in order to mine a block. However, while bitcoin miners gain a distinct advantage when using expensive, mining-specific equipment called ASIC, there is no such advantage with Bitcoin Gold.

With Bitcoin Gold, anyone using commonly manufactured equipment can mine, providing an equal opportunity environment more in line with bitcoin inventor Satoshi Nakamoto’s vision of “one CPU, one vote”.

For more information on bitcoin mining, check out our in-depth mining guide.

One of the very first updates made to the Bitcoin Gold ecosystem was replay protection because a common problem with bitcoin forks is transaction replay. A replay is possible because both the original blockchain and the newly branched blockchain contain the same transaction history.

As a result, malicious users could replicate a transaction from one blockchain to the other, effectively receiving twice the cryptocurrency. Bitcoin Gold implements replay protection that makes one blockchain’s transactions invalid on the other.

How can I get Bitcoin Gold?

If, at the time of the fork, you had bitcoin in your wallet (not in an exchange), then you’re in luck because the Bitcoin Gold hard fork awarded you BTG at a rate of 1 BTC = 1 BTG.

So, for example, if you had 0.5 BTC at the time of the hard fork, you are automatically awarded 0.5 BTG after the fork (while keeping the original 0.5 BTC in your wallet) once you open a BTG wallet.

Buying Bitcoin Gold from a cryptocurrency exchange works similarly to buying any other cryptocurrency. At the time of writing (November, 2017), you can buy BTG from any of the following exchanges:

Get paid in BTG

If you provide a service or product online, you can ask to get paid in BTG. Because the currency is still in its infancy as of November 2017, you might want to offer customers the option to pay with BTC or other altcoins alongside Bitcoin Gold, However, if the cryptocurrency does gain more acceptance, you might see more people willing to pay you for services and products using BTG.

Transferring money with Bitcoin Gold requires a BTG wallet, some BTG on your account and a destination address. The steps to follow are:

What’s next for Bitcoin Gold?

The official roadmap indicates that the developers aim to continue pushing towards making Bitcoin Gold a standalone cryptocurrency. It says it will develop new features on top of the bitcoin blockchain, but exact details remain to be seen.

Zyane is an associate editor for Singapore at Finder. An experienced copywriter and content creator, Zyane enjoys writing on a wide array of subjects. When she’s not busy typing away, she’s reading and musing over a pint.