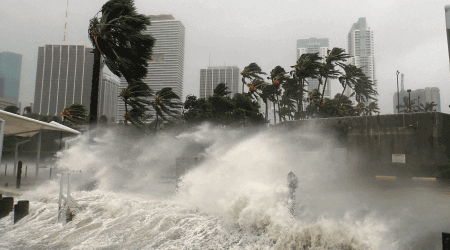 For every 5 people who are ‘prepared’ for a flooding event, only 1 is insured.

When major flooding happens, it causes unbelievable destruction. Consider that more than half of all flood claims across the nation come from hurricane storm surges or the heavy rainfall that comes with them.

If you’re like many, you may have written off the risk as insignificant and think you’ll be fine. And that means you could be in trouble. Here’s why.

More ways to get insurance: Since July 1, 2019, a new federal rule requires regulated lending institutions to accept private flood insurance policies comparable to the National Flood Insurance Program (NFIP), so you now have more options to get insured. As a result, the number of private insurers who offer flood insurance is surging. Check with your homeowners insurance agent or compare flood insurance companies to find one for you.

More time to renew: Due to the coronavirus pandemic, existing NFIP policyholders have 120 days to renew any policies that have expired or will expire by June 15. The normal grace period for policy renewals is 30 days.

An active hurricane season is underway

This year’s hurricane season kicked off this week and will run through November. Already tropical storms are making the news, and the National Weather Service has forecast an above-average season of storms, meaning the US may get hit by six to 10 hurricanes, with three to six of them classified as major hurricanes.

Despite the looming threat of severe weather — and despite a majority of Americans (62%) saying they’re “prepared for a flood,” only 12% actually have flood insurance, according to a Harris poll conducted by National Flood Services. “The findings underscore Americans’ lack of awareness of flood risks, despite the fact that flooding is the most common and costly natural disaster in the US. Further, the survey found 50% of homeowners say they’re ‘less interested’ in buying flood insurance due to financial stresses from the ongoing COVID-19 pandemic.”

On top of this year’s forecast, a group of lawmakers has warned mortgage giants Fannie Mae and Freddie Mac to prepare for a new norm of severe weather thanks to climate change, which is “increasing the frequency and severity of extreme weather events across the country.”