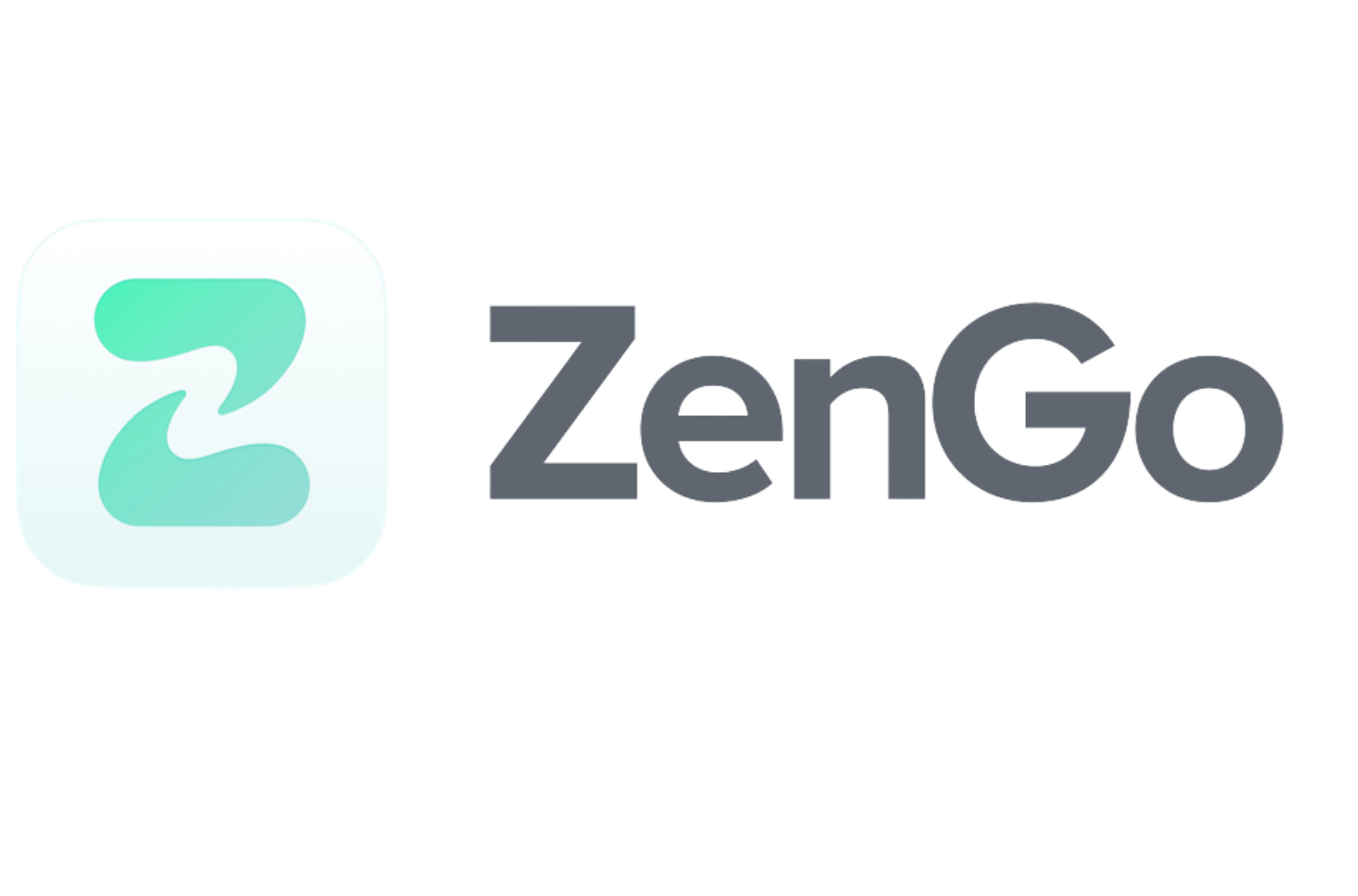 What is Hash Rush?

Hash Rush is a play-to-earn RTS (real-time strategy) game initially launched in 2018 on the Ethereum blockchain before migrating over to the NEAR blockchain in September 2021. The game utilizes blockchain technology, cryptocurrency and NFTs by rewarding players for completing weekly challenges.

The game is based in the fictional Hermeian galaxy where players work to build and defend crystal mining colonies on different planets. Players will summon Ernacks (workers) to gather resources and build infrastructure in their settlement while defending it from monster invaders. 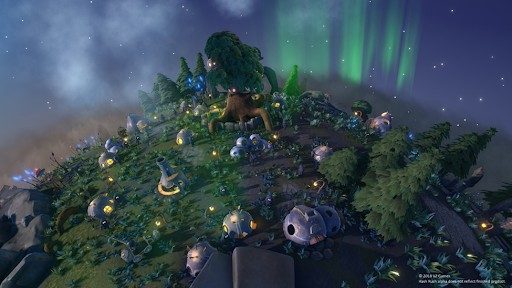 Players will receive rewards for completing weekly challenges. Players will be able to take their NFT rewards and sell them through the Vorto network marketplace.

How to play Hash Rush

Hash Rush is similar to other real-time strategy (RTS) games where players start by generating workers (Ernacks) to collect resources like wood, stone, crystals and fireflies. These resources are then able to be used to create different buildings and advanced units. Creating buildings will generate different rewards. For example, building a hut will increase the Ernack population size, building a sawmill will improve yields for wood resources and building guard towers will improve your settlement’s defensive capabilities.

Hash Rush, like other RTS games, requires players to manage their resources and make adjustments in real time. Players start the game with a capped number of Ernacks that they are allowed to spawn (10). Deciding which resource to have your Ernacks farm is the first decision that a player makes, and it impacts how the rest of the game will play out. Different buildings and units require specific resources to create. Each decision, including where to locate certain buildings, will impact a player’s success. A player who only buys worker Ernacks will be left vulnerable to monster attacks whereas a player who only generates warriors will be unable to support their colony because they have no workers to generate resources. Players must manage their resources and units to respond to randomly generated attacks from the non-playable characters.

Heroes are unique units that will be available later in the game. Heroes will be able to venture around securing strategic resources and defending your base from larger, more difficult, monster attacks.

There is currently a waitlist to join the Hash Rush playtest, but it is easy for players to sign up. On its main webpage, www.hashrush.com, there is a link in the bottom-right corner that prompts players to sign up to the waitlist via their email. 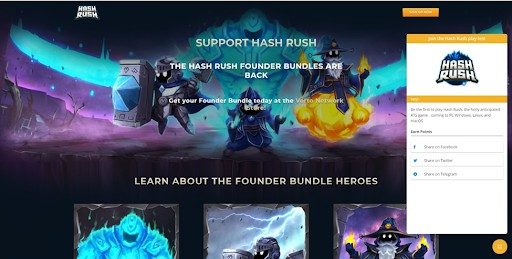 Each person who signs up for the waitlist via their email will need to verify that their email is accurate, and once that is done, they will receive their waitlist number. 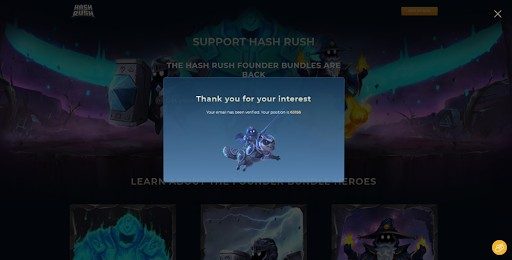 What are NFTs on Hash Rush?

As the game advances, players will create hero Ernacks. These unique units will level up as they progress through the game. The more a hero levels up, the stronger they become and the tougher weekly challenges they will be able to complete. Completing tougher challenges will provide a larger reward for players in the form of cryptocurrency and NFTs. The heroes themselves are NFTs and can be bought and sold on the Vorto marketplace.

Currently, players can support Hash Rush even if they are still on the waitlist to access the playtest. They can do this by purchasing 1 or all of the hero Founder Bundles with fiat currency. Each bundle will include 1 of the 3 heroes and a unique NFT in-game skin called the Ursara Ernack worker skin. This will be a cosmetic NFT for your worker Ernacks. Each hero is different and comes with unique abilities for differing play styles.

The Founder bundles are retailing on the Vorto gaming platform for $25 each or they can all be purchased for $60 in the Triumvirate package.

What is the Hash Rush token (RUSH)?

The RUSH token was developed on the Ethereum blockchain as Hash Rush’s utility token. It is an ERC-20 token that was awarded to players for completing weekly challenges.

On August 20, 2021, Hash Rush initiated a token burn for 60 million RUSH tokens as they began the migration process to the NEAR blockchain. This was one of the largest token burns in the history of decentralized gaming. Players who had collected or purchased RUSH tokens in the initial launch were incentivized to send their tokens to an Ethereum burn address in exchange for a limited edition NFT. The first 500 players who sent a minimum of 100 RUSH tokens to the address would receive this NFT reward.

Hash Rush has migrated over to the Vorto platform on the NEAR blockchain. Additionally, the developers are trying to persuade players to burn their remaining RUSH tokens. As a result, you may be wondering if it is still worth holding onto some RUSH tokens. To answer that question, it is important to understand what the Vorto gaming platform is trying to accomplish.

The Vorto gaming platform is launching a traditional online gaming platform akin to the platforms that Steam, Epic Games Launcher and the Blizzard launcher have run for years. Vorto Gaming is attempting to create a platform that decentralized crypto and NFT games can be launched from while also supplying a single marketplace where players can buy and sell their hard-earned NFTs. Steam changed its terms of service in October 2021 to de-platform games that provide cryptocurrency and NFT markets. The Vorto gaming platform is still in development, but there is a definitive opportunity for someone to fill the space that traditional gaming platforms are removing themselves from.

As for the initial RUSH tokens that players may still have, this is what the CEO of Vorto Gaming had to say about the issue: “We are constantly evolving the Vorto platform, and we owe it to our users to look at ways of integrating some of our original assets – like RUSH – into this ever-expanding metaverse.”

Hash Rush is a fresh take on the RTS genre. It is fun and approachable, and it will be an easy on-ramp for gamers into the cryptocurrency and NFT space. It has been in development since 2018 and the developers have listened to the issues early playtesters had with the game. The relaunch of the game in September 2021 has generated excitement from both the gaming and cryptocurrency industries.

MegaCryptoPolis Guide Thetan Arena: How to play and earn