Explore the Emerald Isle by train, bus or car. 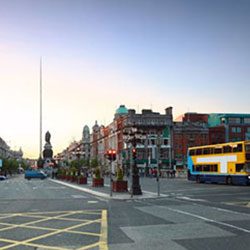 Comparable in size to the state of Indiana, Ireland is a wonderful country for a scenic road trip, but you can also traverse it using public transport. Dublin is a very walkable city, with many of the top attractions clustered close together – but out in the countryside you’ll need wheels to get around.

Since Ireland itself is two separate countries, public transportation can seem confusing. While the Republic of Ireland uses euros, Northern Ireland uses pounds.

The good news is, there’s no need to be overwhelmed — use the National Journey Planner to plan trips throughout the island. You can plot routes online or through the app. It’ll give you the most efficient routes from point A to point B — including instances where walking or cycling is more ideal than motor vehicles.

Still, the Republic of Ireland and Northern Ireland each have their own transportation services. Here’s what you need to know:

Public transportation in The Republic of Ireland

The Republic of Ireland uses a combination of trains, trams and buses to link the region — including the cities of Dublin and Cork. All modes of transport are above ground. Your options include:

Get unlimited access to Airlink, Dublin Bus, Go-Ahead Ireland routes (only in Dublin), Luas, DART and the Suburban Rail with a Leap Visitor Card. You can purchase one online (it’ll be mailed to your house), at the airport or from agents in Dublin. Rates are as follows:

Northern Ireland, which is on the same island but technically part of the UK, is connected by Translink. A public corporation, Translink operates the following methods of mass transit:

Fare on Translink buses and trains is determined by the time of day and how many “zones” you move through. A single adult fare for a trip through just one zone costs $3; a ride through 3 zones costs $5.75. Budget travelers should visit the Translink website to calculate fares in advance, based on where you’re going.

Get unlimited access to Translink routes with an iLink card. Top it off at a station or at an eligible kiosk. iLink cards are most similar to NYC MetroCards in that they’re reloadable and make it easy and convenient to board buses and trains with just a swipe.

Getting to and from the airport

With Irish rail journeys across the country taking just a few hours in any direction from Dublin, most train journeys are short and sweet in Ireland.

Eurail offers an Ireland rail pass, which also gives you a 30% discount on Irish Ferries and Stena Line, which can get you to Wales.

Taxis and Uber in Ireland

Uber isn’t as prevalent in Ireland as it is in the US; in fact, you’ll only find it in Dublin and Belfast.

Since the transportation industry is heavily regulated by the government, private drivers aren’t allowed to drive with Uber. This means that when you order an Uber in Ireland, you’ll actually be catching a ride with a licensed taxi or limousine driver.

Among locals, hailing a taxi via an app is much more common than using Uber. You’ll likely have better luck getting picked up using either mytaxi or Lynk taxi service apps.

If you’re driving through the countryside or between regions, renting a car lends a front-row seat to seaside cliffs and mammoth limestone formations. The following rental companies set up shop at Ireland’s airports:

Instant access via mobile phone. Rent by the hour or the day. Insurance included. No membership or subscription fees.

Get into the city or to the airport with ease from Dublin or Belfast when you book an airport transfer in advance.

Book your airport taxi ahead of time

While Ireland isn’t exactly known for a super-efficient transportation system — especially since currency is split between north and south — navigating routes within the Emerald Isle is all part of the grand adventure. Cross-country trippers might consider renting a car for a leisurely drive in lieu of public transport.