Planning to travel soon? Here’s what experts project will happen to airfare 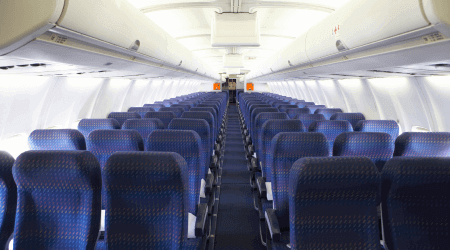 Report compares the COVID-19 outbreak to 9/11 and the Great Recession to predict the impact on travel over the next five years.

If you’re looking to sneak in a trip, you might want to think about planning it sooner than later. Airfare prices are expected to dip over the next year before ultimately increasing through 2025, according to data collected by Dollar Flight Club and provided to Finder.

Domestic and international flight prices are down 41% and 35% on average, respectively. For perspective, the report found that flights dropped 18% after 9/11 and 21% following the Great Recession, and it projects domestic fares to stay 41% below 2019 prices through 2021 — a result of lessened demand.

From there, however, domestic prices are expected to increase overall by 21% through 2025 — the long-term impact of the COVID-19 pandemic that has crushed the tourism industry. International fares are expected to rise significantly as well: 27% through 2025. Dollar Flight Club sourced its data from the Bureau of Transportation Statistics, Federal Aviation Administration and International Air Transport Association.

Dollar Flight Club reports travelers should expect fewer airline choices, flight times and available routes overall — meaning higher prices. You can also prepare for extra bag fees and miscellaneous charges as airlines struggle to recoup lost profits over the next several years. On the upside, it projects fewer flight delays and cancellations, based on data that shows the number of on-time flights rose 13% between 2007 and 2012.

To take advantage of reduced fares over the next year, explore Travel Finder to find deals and book a trip.