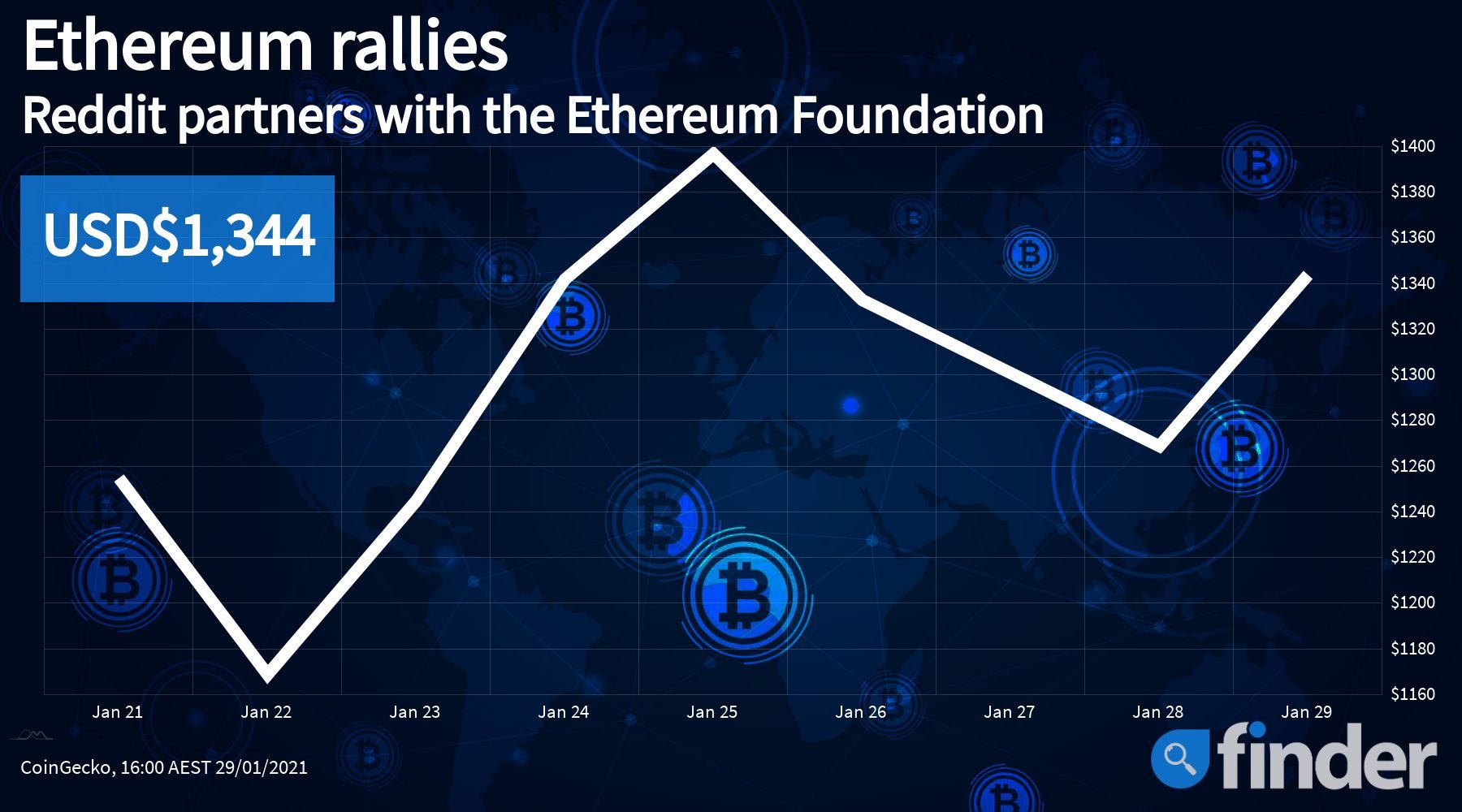 After falling below the $1,220 mark just over 24 hours ago, Ether seems to have forged a strong comeback, with the premium altcoin currently sitting at $1,344. This upsurge has come close on the heels of the Ethereum Foundation announcing its partnership with Reddit so as to develop various scaling tools for its existing blockchain network.

According to an announcement released via the Ethereum subreddit page, the social media platform will be expanding its overall scope of work with the Ethereum Foundation so as to provide the latter with everything from “development resources to scaling tools”. The statement further read:

“Our blockchain efforts will be led by Reddit’s Crypto team. In this new stage of our partnership, immediate efforts will be focused on bringing Ethereum to Reddit-scale production. Our intention is to help accelerate the progress being made on scaling and develop the technology needed to launch large-scale applications like Community Points on Ethereum.”

Though not confirmed, the collaboration could see Reddit’s resource pool, which boasts of a development team that currently looks after 50 million daily users, being used to work on various layer 2 scaling tools that the foundation is currently exploring, or in the polishing of certain projects that may already be in their prototype phase (so as to get them ready for mainstream deployment).

Lastly, it bears mentioning that Reddit introduced the concept of “Community Points” last year, wherein users were afforded the option to gift each other crypto-based rewards in exchange for posting quality content. These points, stored on Ethereum’s Rinkeby testnet as ERC-20 tokens, can be redeemed for badges as well as other custom features.

Despite the aforementioned volatility that saw ETH’s value jump from $1,207 to $1,330 almost overnight, the currency’s technicals seem to be in an extremely good place right now. Commenting on the situation, Jay Hao, CEO of cryptocurrency exchange OKEx, told Finder that 99% of all ETH wallets are in the green so it is quite normal to see some profit-taking happening. He added:

“Despite ETH putting in a phenomenal performance over the last year and the fundamentals looking strong with its increasing supply scarcity, network expansion, and growth of DeFi, ETH price is subject to volatile shocks and will never continue to go up in a straight line.”

Hao further opined that a number of large corrections have been witnessed in relation to BTC recently, something that has most likely had a direct effect on the price of other cryptocurrencies, including Ether, as well. “I believe this is temporary and while some weak hands and late buyers may get shaken out, the outlook for ETH remains bullish,” he added.

Providing his thoughts on Ether’s near-term potential, J.D. Salbego, founder and CEO AnRKey X, a DeFi, NFT, and eSports platform, told Finder that the Ethereum market cycle has been in lockstep following the previous Bitcoin market cycle pattern, which on paper means that ETH is gearing up for another massive upsurge. He added:

“Both currencies – i.e. BTC and ETH – look like they are consolidating towards a new run, because they’re dropping sideways forming a bullflag pattern above their 20 week simple and exponential moving averages. Ethereum has the potential to reach around 10 000 dollars.”

Ether is in a good place right now

As with any investment, cryptocurrencies are unpredictable and affected by many factors. For example, when any asset rises too high too quickly, corrections are common. Even though Ether’s fundamentals are strong, in the near-term, it is entirely possible that BTC’s future pullbacks will see ETH retracing sharply again. On the subject, Hao opined that any upcoming highs and lows will be temporary (for ETH) and it looks as though the currency is all set to test a new ATH soon.

Another fact to remember is that a majority of all new innovation happening within the crypto sphere is taking place within the Ether ecosystem, thus it stands to reason that the platform will dominate the industry even though the currency’s price may not go on surging at the moment. In this regard, Salbego highlighted:

“Most new activity in the Ethereum ecosystem is centered around DeFi. These tokens represent financial services hard-coded into smart contracts governing themselves. This idea is set to disrupt the traditional financial sector. The potential total value of the cryptocurrency segment would potentially rival that of the existing traditional economy, or reach higher figures due to inherent dynamism of the cryptocurrency ecosystem.”