Ethereum price pulls back to US$1,700 while gas fees spike 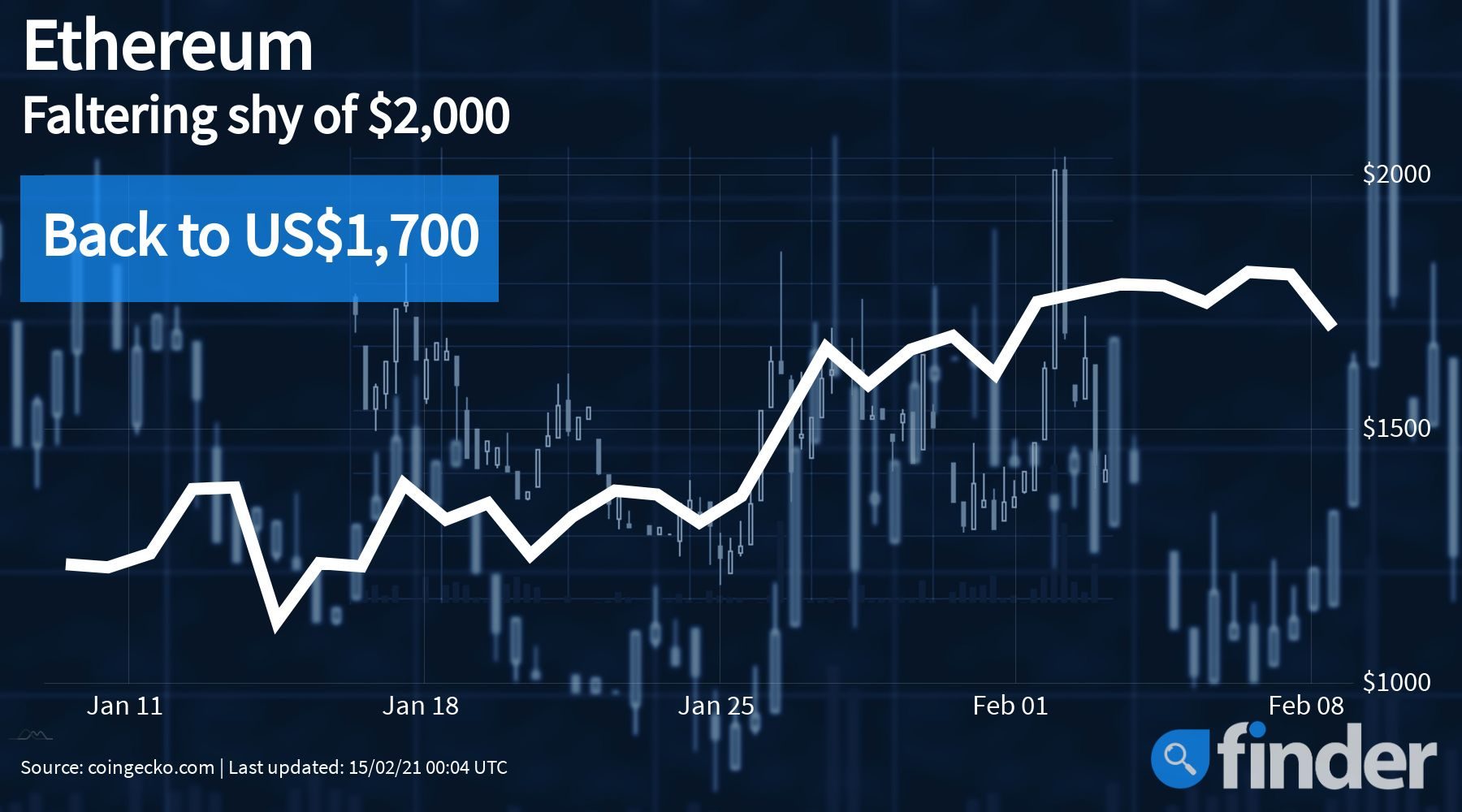 As prices dropped and trading bots spun up, network congestion trapped smaller players in their positions.

The last 24 hours have been somewhat of a rollercoaster ride for Ether, as the second-largest cryptocurrency by total market capitalization, fell from $1,860 to a relative low under $1,700. At press time, the digital asset is trading at around $1,700.

However, despite these fluctuations, the premier altcoin’s fundamentals continue to look strong, with a run up to the all-important $2,000 psychological barrier still seeming quite imminent. On the subject of ETHs monetary future, Grim Reaper, the pseudonymous founder of cryptocurrency project Pylon.finance, told Finder:

“I think we’ll see Ethereum probably hit $2,000 and then it’ll be up to the market to determine a correction (or not) from there. I’m being told Bitcoin is following gold, so we may see a correction start in May and rebound towards Q4, but bear in mind this is almost entirely based on previous cycle studies and syncing Bitcoin’s movement to gold.”

A similar outlook is shared by Max Krupyshev, CEO of CoinsPaid.com, who too believes that Ether’s short term outlook looks incredible and that there is no reason to doubt that the altcoin’s current growth spurt will slow down anytime soon – citing bullish market conditions as well as the general increasing trust around crypto as being the primary drivers.

Not only that, Krupyshev also highlighted that this current upward momentum we’re witnessing can potentially help spur the rise of many altcoins, especially as Ether’s scalability problems continue to become increasingly prominent, adding:

“Well the market is moving sideways, for now, and Ether should hit 2k at least once before correction. The currency’s growth will carry on until the seasonal downturn but is unlikely to fall below $1000. Despite its significant capitalization, Ether remains the № 2 cryptocurrency with the same continuing problems – i.e. it still hasn’t resolved its issue of network scalability”

As prices dropped, arbitrage and liquidation bots on Ethereum began to ply their trade, causing gas fees to surge and trapping people in their positions, and presenting an example of how important scalability can be to overall network health beyond cheap transaction fees alone.

As Finder reported earlier, in light of Ether’s rising gas fee issue, other ecosystems with in-built smart contract functionality like Binance Smart Chain (BSC), have been gaining a lot of traction. For example, yield aggregator Harvest Finance and multi-service platform Value DeFi are just two projects that recently expanded their operations on to Binance’s blockchain.

While on paper, BSC and other competitors offer their users with minor short-term advantages related to chapter transactions, lower network congestion, etc, a number of experts have suggested that as and when these platforms gain significant mainstream traction, they too will be faced with the same issues as the Ethereum network. On the subject, Grim Reaper pointed out:

“It’s funny because we’ve been here before. When Tron offered the same solution Binance has now. BSC offers a kind of ‘pressure release valve’ until developers can catch up to network demands.”

He further equated ETH’s current scalability issues to the problems faced by the global ‘mask and disinfectant supply chain’ at the start of COVID in March 2020. “Once supply chains caught up to speed, prices returned back to normal, and possibly even cheaper”, he added, suggesting that once developers are able to successfully facilitate the ETH2.0 transition, the scalability issues everyone is currently going on about may soon become a thing of the past.

Also, another thing to bear in mind about Ethereum’s network congestion problem is that we’re currently in the midst of the Chinese New Year, which means that little-to-no mining hardware is being produced at the moment. This is another possible reason for the currency’s native TPS (transaction per second) rate being at relative lows right now.

Following the launch of Ether futures on CME earlier this month, there was nervousness in the market as to which direction the digital asset would go. While initially there were calls for ETH to dip significantly, the currency’s continued stability after the launch led many to believe that Ether may now be on an upward trajectory, especially since the news was coupled with Tesla’s announcement of entering the crypto market.

That being said, ETH has failed to break the $1,900 barrier even though it has come close a number of times. Commenting on why Ether futures have been unable to spur the currency’s value, Krupyshev opined:

“I do not think that futures will bring any changes in the nearest time. It can be seen as an additional tool for traders. But for miners or holders, it doesn’t hold any value. However, for those engaged in raising or lowering the price, it turns into an indispensable tool.”

He added that it is quite surprising to him that the ETH dev team has failed to address critical community concerns regarding scalability, something that could potentially result in unwanted price movements that could annoy a lot of ETH users as well as prevent the network’s much talked about Proof of Stake algorithm from deploying correctly. Only time will tell how things will play out now.