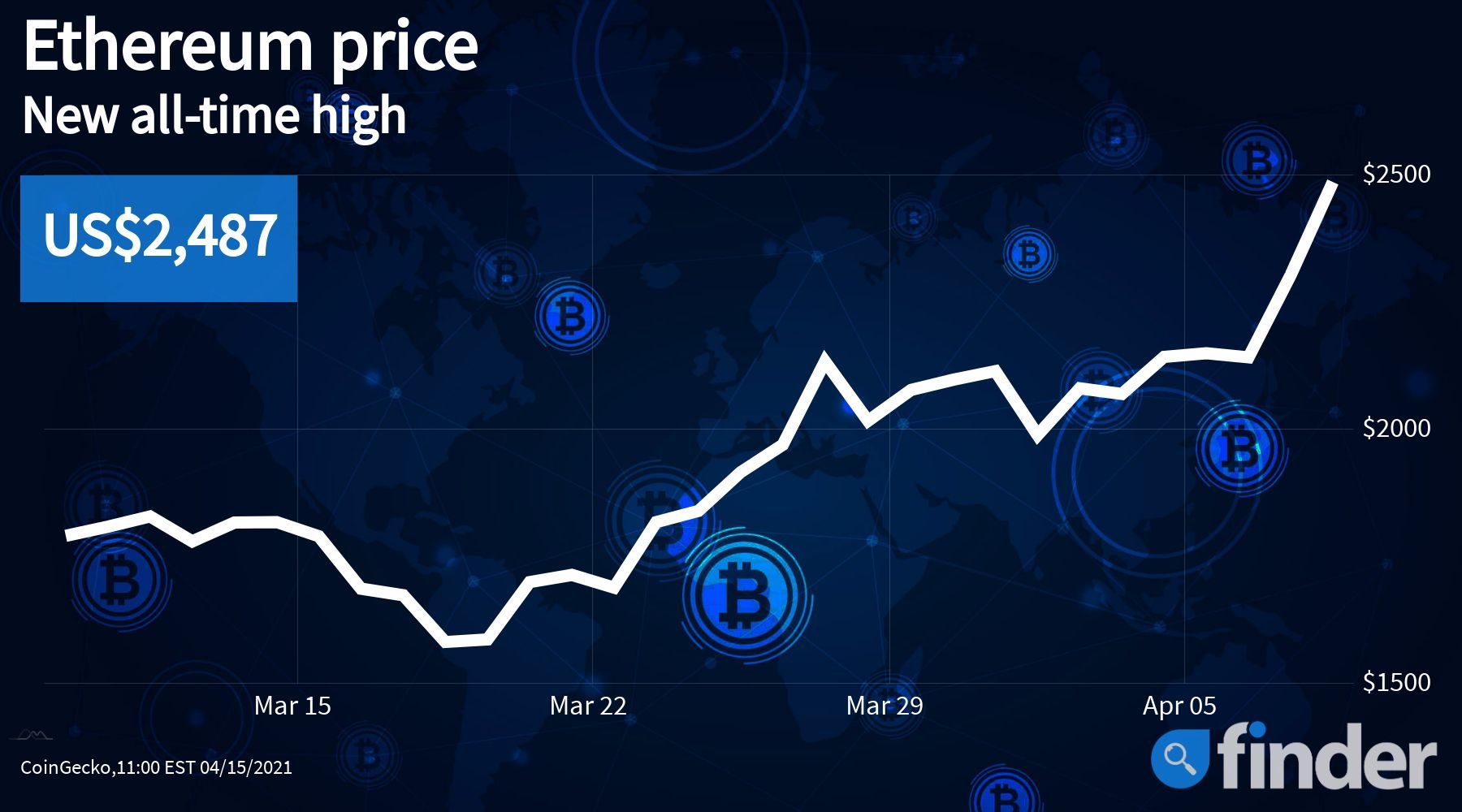 Ether has been on a tear over the last 24 hours and has been showcasing gains of nearly 10% over the past week. At press time, the currency is trading at $2,470.

This latest value spike came just before a major upgrade — dubbed “Berlin” — that’s now live on the Ethereum network. The update seeks to help reduce processing costs associated with certain transaction (tx) types, allowing for multiple tx’s to be packaged into a single unit, thus allowing for a more efficient relay of data within the ETH ecosystem.

Not only that, but Berlin will also pave the way for “London,” another major network overhaul (which includes EIP 1559) that is all set to go live a few months later in July.

Commenting on Ethereum’s ongoing ascent, Antoni Trenchev, cofounder and managing partner for Nexo, a regulated institution for digital assets, told Finder that Ether currently has solid support at $2K despite congestion and scalability issues, but the network needs the Berlin and London upgrades for its amazing performance to continue, adding:

“Luckily, Ethereum’s developer community isn’t watching the grass grow beneath their feet. With the EIP 1559 release coming to ease on-chain issues, we’ll likely see more rallying, аlthough this will likely be but a small spike as compared to the rally-true poised for when Ethereum 2.0 hits.”

Furthermore, he suggested that the wider implications of ETH’s success bode well for altcoins in general too, since an endorsement of any kind for Ether can be seen as an endorsement for blockchain’s potential and all of the companies that have been built using this technology.

Similarly, David Schwartz, project lead at Hermez — a decentralized zk-rollup focused on scaling payments and token transfers on the Ethereum network — pointed out to Finder that ETH’s future looks bright, especially with many network updates and layer 2 integrations looming large on the horizon. And while there may be some volatility, he is confident that the Ethereum network will pass the test of time and keep growing and innovating. Schwartz elaborated:

“There’s one reason why Ethereum is congested: people are actually using it. High gas fees are proof of the demand for using Ethereum as a settlement layer. Considering the amount of value being transacted, and the number of developers working to upgrade the code, Ethereum is and will likely keep being the Layer 1 king.”

According to gaming hardware manufacturer Nvidia, the company is quite optimistic about its future fiscal outlook. Nvidia’s market performance has also extended to its GPU manufacturing wing, with the unit increasing its first-quarter revenue estimate for its crypto mining offering — referred to as the CMP — by over three times.

In this regard, Colette Kress, Nvidia executive vice president and chief financial officer, announced that with the digital asset market surging, the company is fairly optimistic about its future when it comes to producing high-quality GPUs. On the subject, Kress was further quoted as saying:

Lastly, Nvidia’s threefold increase in its crypto mining equipment just goes to show the rising demand for such equipment. For example, just last month, mining outfit Hut8 revealed that it had purchased $30 million worth of Nvidia’s GPU hardware — estimated to be worth 60% of Nvidia’s initial CMP estimate.

In terms of where the crypto market may be headed, Schwarz believes it’s highly unlikely that we’ll ever see a “one-system-fits-all” scenario when it comes to blockchain tech and that in the coming years, a large number of decentralized platforms will run in parallel with one another rather than compete amongst themselves. He added:

“Contrary to the Ethereum maximalist views, there is space for competitors, like Binance Smart Chain or Solana. None of these networks will “kill Ethereum”, but Ethereum won’t kill them either. The future will likely be a multichain landscape where Ethereum dominates, and other networks carve their own niches.”

Varun Satyam, co-founder of Bitlumex, a PR newswire for blockchain and crypto products, believes that Ether has transformed into the digital currency that developers all over the world prefer for a variety of reasons — including operability, smart contract capabilities, etc. In terms of what the future may have in store for Ether monetarily, he opined:

“Right now ETH is in its accumulation phase, so there can be sudden price increases expected in the future. It’s going to be the same as how when BTC was hovering around 20k and then went to 50k in no time”, he added.

Lastly, Satyam believes ETH is now the core transaction layer of the crypto world and it’s going to take at least two to three years to replace the network with any other platform, especially since most other networks have yet to be faced with any real scalability related challenges.