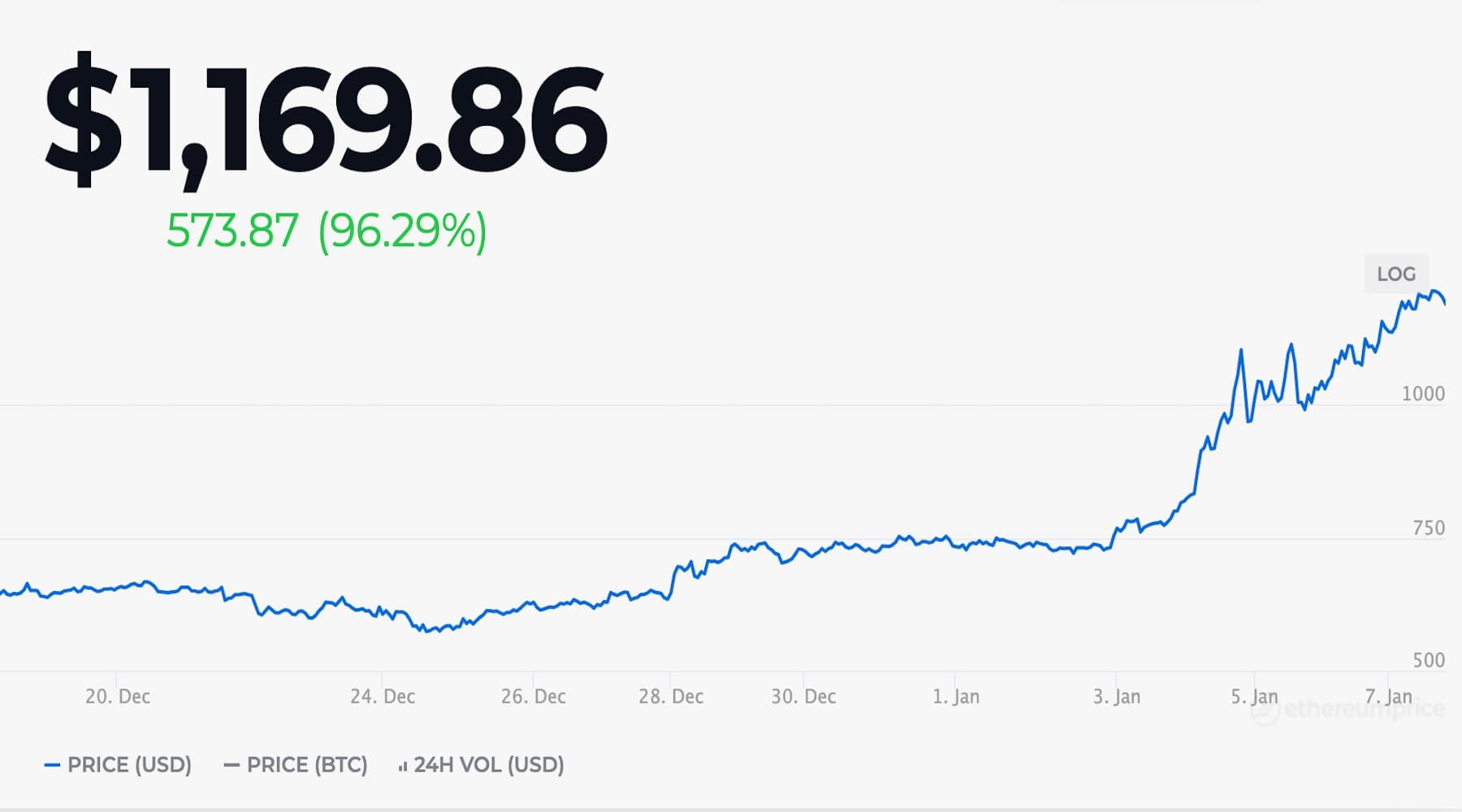 With ETH currently trading above the $1,200 threshold, experts believe that the digital currency is all set to smash its previous all-time high of $1,448 in the coming weeks.

Ether, the native digital currency associated with the Ethereum network, seems to be on a roll over the last week, chalking up a multi-year high of $1,200 — a price point that was last witnessed back in January 2018. On a more technical note, since December 31, the second-largest cryptocurrency by total market capitalization has risen by over 60%, even surpassing the monetary gains incurred by Bitcoin over the same time period (i.e. 30%) by a long shot.

While there is no doubt that Ether is currently riding high in part due to Bitcoin’s impressive run — as well as the entry of institutional players into this ever-evolving market — it also stands to reason that the currency is also coming into its own as an independent asset, especially with the Ethereum ecosystem witnessing a massive surge in development activities over the past year.

For example, as per a recently released study, over the course of the last 12 months, the number of DeFi apps built atop the Ether ecosystem increased by a whopping 250%. Not only that, transactions facilitated via various Ethereum-based DeFi platforms such as Curve, Airswap, Yield, UniSwap, and others, increased from $11 billion in 2019 to an incredible $256 billion during the aforementioned time span.

To get a better idea of what exactly is causing demand for Ether to grow at such a rapid rate, Jan Strandberg Founder of the popular DeFi platform YIELD.App, which was recently able to raise $5 million via a hybrid funding round, told Finder that while Bitcoin’s run-up has clearly had an impact on ETH, that itself does not even come close to explaining this ongoing momentum, adding:

“Ethereum has made a lot of progress and worked hard on improving its platform over the past few years. Ethereum 2.0 is here and the adoption of its blockchain is growing fast, especially with DeFi taking over. All in all, the ETH run-up both has very good technical and fundamentals bases.”

Going a step further, Garlam Won, CEO of blockchain-centric growth advisory firm Momentum6, opined that when talking about Ether’s current run, one can clearly see that the rally has primarily been driven by factors other than institutional entry, which actually leaves the door open for a higher monetary ceiling for ETH, as and when traditional players do decide to go long on the digital currency. He further added:

“In my opinion, there is no correlation or any comparison between Bitcoin and Ethereum, and it is wrong to compare those assets. Altcoins might see an upscale because retail investors might not have significant capital available to purchase considerable BTC allocation that will make a difference. Hence, they invest in altcoins hoping that they will see substantial growth.”

In the wake of this ongoing bull wave, the CME Group has identified that institutional interest in Ether has been slowly but surely increasing. As a result, in a press release issued on December 16, the world’s largest financial derivatives exchange announced that it was planning to launch a new ETH futures product starting next month.

In this regard, from February 8, traders will be afforded the opportunity to bet on Ethereum’s future monetary valuation using a fully regulated set-up. The offering, referred to as the CME CF Ether Reference Rate, will provide crypto enthusiasts, traders, and investors with efficient exposure to the second-largest digital asset by total market cap, allowing for better price discovery and eventually increased adoption within institutional circles.

Even though such developments have set the crypto world abuzz, on a more cautionary note, Ethan van Ballegooyen, Lead Developer for decentralized hosting platform Ether-1, told Finder that while the launch of Ethereum 2.0 and the quickly evolving DeFi space have added fuel to Ethereum’s fire run, the coming months will be crucial, adding:

“A fully functional version of ETH 2.X is still possibly years away and has left space for some heavy innovation and competition in the layer-2 solutions market, I think over the next couple of months layer 2 for both BTC and Ethereum are going to be extremely important but at the moment lack ease of use.”

Is an alt-season upon us?

While most people seem to be caught up with the hype surrounding Bitcoin and Ethereum, the last seven days have seen a number of other premium altcoins such as Cardano (ADA), Stellar (XLM) and ChainLink (LINK) witness considerable gains of 87%, 181%, 51% respectively, as well.

In fact, Cardano’s amazing push over the past fortnight has seen the digital asset overtake Bitcoin Cash (BCH) to become the world’s sixth-largest cryptocurrency by market capitalization. This could be because the Cardano network is slated to undergo a number of crucial updates in 2021, as well as the fact that BTC’s value recently crossed the $37,000 threshold, which may have led to more money flowing into other altcoins.

On the subject of how well various alts, like the ones mentioned above, stand to grow in the coming few months, Edul Patel, CEO of crypto trading platform Muddrex, told Finder that while the top few altcoins will continue to remain highly correlated and move in line with BTC, other lower-ranked currencies will showcase varied patterns, adding: “We have seen the cycles of money primarily coming into BTC and then moving into Alts. I expect this to continue.”