Ethereum price dips below $1,500 in midst of marketwide correction 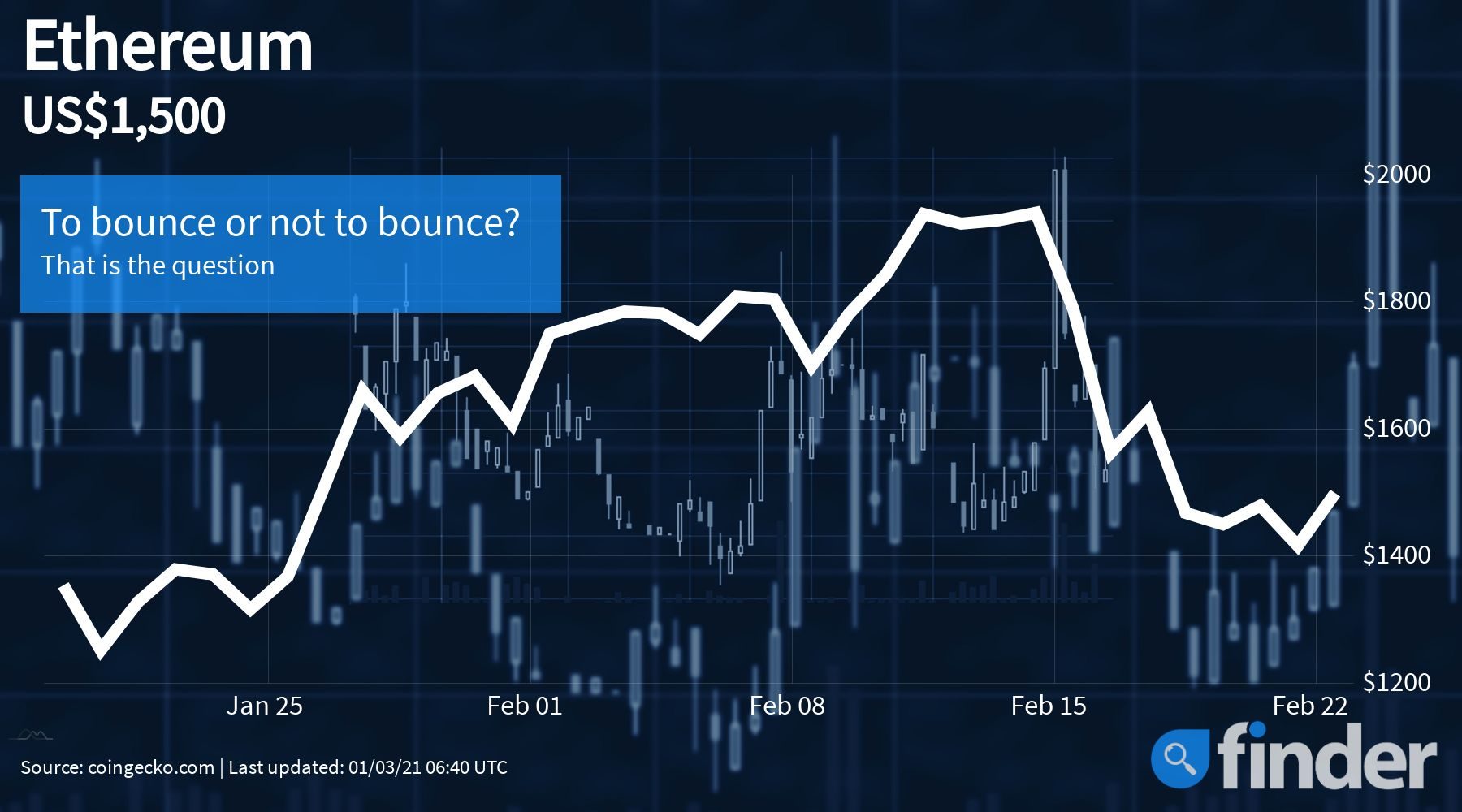 The last 24 hours were marked with a lot of drama for Ether, especially as the premier altcoin was beginning to showcase signs of another breakout after scaling up to the $1,625 mark. However, after hovering around the $1,600 region for around 12 hours running, the currency started to slide rapidly, dropping by a staggering 7% within no time. As a result, the second-largest cryptocurrency by total market capitalization is now sitting at $1,480.

This latest downward trend comes a few days after the chairman of the U.S. Federal Reserve Chair Jerome Powell acknowledged he “would be concerned” by tightening financial conditions, especially as the American government’s bond yields have been putting an increasing amount of pressure on borrowing costs.

Commenting on the subject, CEO of cryptocurrency exchange OKEx, Jay Hao, pointed out to Finder that in the wake of US Treasury yields beginning to rise — with 10-year yield levels rising to their highest since February 2020 — most crypto assets including Ethereum have taken a hit and may continue to be at the receiving end of some solid bearish momentum, adding:

“We’re also approaching a year since the March 12 selloff and a month that is traditionally challenging for cryptocurrencies and other risk assets. So, I believe that the near-term outlook for Ethereum is neutral. There are some significant headwinds but if ETH bulls can maintain this newfound momentum, we could see it testing the $2K level once again.”

Can Ethereum retain its momentum?

In Hao’s opinion, Ethereum is facing challenges much greater than those being posed by the aforementioned US Treasury yields, claiming that the digital asset’s scaling issues have become a serious problem and could likely delay the rollout of ETH 2.0, even as the platform’s developer community continues to prioritize Ethereum’s capacity by introducing solutions such as rollups to increase transactions.

“We are seeing an increasing number of competitors that can offer low fees and faster transaction times”, he added. In this regard, it is clear for everyone to see that the number of EVM compatible chains that can allow dApps to migrate seamlessly has grown significantly in just the last couple of months.

“If we are to act quickly in building the infrastructure required to keep up with the increasing demand of DeFi, it is essential we can build interoperable cross-chain systems that can communicate with both the Ethereum network and new networks that can withstand high traffic numbers while increasing liquidity on both chains. We will see more composable solutions surface as DeFi is brought to the masses.”

Hao believes that this increasing competition is healthy for Ethereum, as it forces the platform developers to resolve their issues as quickly as possible or risk losing their current market clout in a big way.

That being said, it bears mentioning that Ethereum, by far, still has the largest developer community in the blockchain space as well as the greatest number of dApps. Thus, it stands to reason that we will see some massive improvements being made in the near term.

DeFi transactions have slowed down

It is no secret that the DeFi market has been on a tear over the course of the last 12 odd months, with the total value locked across all protocols increasing from $1 billion to $45 billion. Not only that, a whopping $24.33 billion of this value is spread across the top 5 platforms operating in this space.

However, despite this meteoric rise, data made available by Dune Analytics shows that trading volume on DEXs has been declining quite rapidly, with numbers dropping since the last week of February. Not only that, between March 2-3, the daily 24-hour growth metric was down by 50%.

Over the course of the last month or so, the Non-Fungible Token (NFT) sector has seen a substantial rise in its activity levels, thus leading to fears that gas fee prices may surge even more. Also, as an increasing number of NFT projects launch and hold auctions, network congestion is likely to keep increasing.

In this regard, a whole host of Layer 2 solutions and cross-chain compatible platforms like Polygon and Binance Smart Chain (BSC) have started to become increasingly more prominent since they afford developers amazing short-term solutions to the rising fee crisis.

Lastly, since the start of February, a number of prominent DeFi projects have gone in search of other platforms. For example, Aavegotchi and SushiSwap recently integrated their operations with Polygon while Harvest and Alpha are expanding their operations onto BSC. This trend seems quite likely to continue as we move into the future, especially as Ether’s sustainability woes keep mounting.