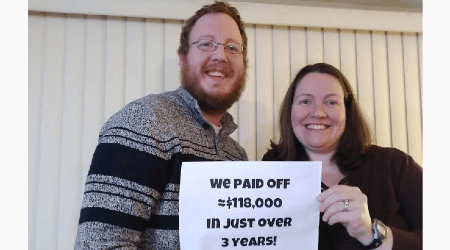 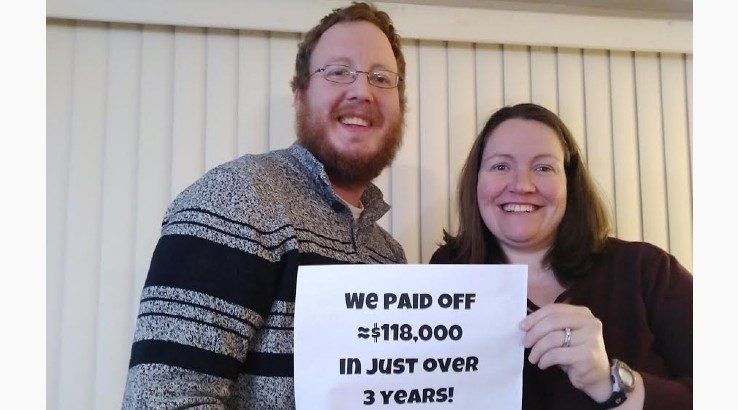 From starting side hustles to maximizing credit card cashback rewards, they tried it all.

Our new series highlights success stories from real people who’ve managed to dig themselves out from under a lot of debt in a short time. Answers are edited for length and clarity.

What was the turning point that encouraged you to aggressively pay off your debt?

Although I’ve always been interested in paying off any debt as quickly as possible, my then fiancée and I knew we wanted to get married and have kids. Having kids was going to be expensive, and we figured that when we had children, we wouldn’t be able to make as large of a payment on our debts as we would like. So we paid off as much as possible — as early as possible.

What was your job situation at the time?

We both worked full time with decent incomes. We still do, too, at the same jobs we had then.

Did you have a mortgage or car payments at the time?

We had separate houses at the time, although I moved in with her at the beginning of 2017 so I could get my house ready to sell. We both owed on each of our homes at the time, but not a large amount — probably less than $20,000 each.

What steps did you take to pay off this debt?

I started making monthly “debt snapshots” on the first of each month and sending them to my wife. This encouraged us, as we could see our debt decrease each month.

At the beginning — and until we had our first kid (and maybe a bit after that) — we literally put every extra dime we earned toward debt. If I found a dime (or even a penny!) on the ground, I would keep it in the car until I needed to stop by the bank. Then, I would deposit that coin (oftentimes several coins by the time I needed to go) and transfer those cents toward the debt.

I did some side hustling too — flipped things from thrift stores to eBay, earned credit card cash back and even earned bank account signup bonuses. Just like with the coins on the ground, every bit I earned I put toward the debt.

I also started designing and selling T-shirts through print-on-demand services such as Redbubble and Merch by Amazon.

We also took a Dave Ramsey class before getting married.

Did you explore any other strategies before deciding on this option?

Since we took the Dave Ramsey class, we considered prioritizing our debt by the amount remaining. But we ultimately decided to prioritize by interest rate instead to save the most money.

Did you have a timeframe for when you wanted to pay off the debt by?

Nothing specific — just as soon as possible.

Since you’ve paid it off, do you have other debt you’re trying to tackle next?

We’re not done paying off our debt — we still have around $56,000 to go. More than half are the remaining student loans, and the rest are our two car loans.

Once our debt is paid off, we want to ramp up our savings and investments.

What advice would you give to others?

Three tips I would give to others trying to pay off debt:

What did you learn from this experience?

Always look for opportunities. My T-shirt business still nets me around $100 a month, and I’m not as involved with it as I would like.

Also, the math for debt works the same as the math for savings. In fact, debt and savings are two sides of the same coin. Every debt is someone else’s savings (or investment). Your savings account is a debt the bank owes you.

Anything else you want readers to know about your story?

Every “I paid off my debt in such little time, and so can you!” story seems to have some caveat: daddy got me a job, I’m a Bitcoin millionaire, I inherited millions.

There are only two caveats I can think of with my story.

The first is that both my wife and I have decent-paying jobs. It wouldn’t have been as easy (or perhaps even possible) if we had minimum-wage jobs. Then again, if I had a minimum-wage job, I might not have the student loans I have.

The second is that I inherited my house, which allowed me to live nearly rent free (I paid property tax) for almost 10 years. Plus, I was able to put the money I made when I sold it toward debt. It wasn’t a million-dollar mansion — it was worth only about $20,000 — but it’s still something that not everybody has. The “mortgage” that I mentioned earlier was a HELOC I took out on the house that I never should have in the first place.