Where to watch Game of Thrones online in Canada

We've got the details on where you can binge the hit fantasy-drama series from beginning to end. 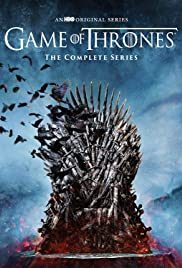 Our recommendation: Game of Thrones

On May 19, 2019, devoted fans world-over mourned the conclusion of the hit series Game of Thrones, which aired its final episode following a solid eight-year run.

With 73 episodes, eight seasons, 100+ characters and literally hundreds of awards under its belt – including countless Primetime Emmys and a Golden Globe for Best Supporting Actor (Peter Dinklage) – this TV titan is sure to remain a popular go-to fantasy-drama for years to come.

Want to check it out for yourself or relive your favourite episodes? We’ve got the low-down on where to stream and buy Game of Thrones, so you can do just that.

Get more out of streaming

Once upon a time, the only service where you could watch HBO shows released in the US was via HBO Canada. Canadians can now stream Game of Thrones exclusively on Bell Media’s Crave service. So much for competition. This streaming giant is the only game (of thrones) in town.

That being said, you can acquire seasons 1-8 via other means as well. The entire GoT catalogue is available for purchase on many of the usual services like iTunes, Google Play, PlayStation Store and The Microsoft Store.

Where can I watch Game of Thrones legally, and how much will it cost?

There’s only one way to go about this. You’ll need to sign up to Crave’s premium service (called “Crave + Movies + HBO”).

Unlike the basic service that’ll set you back CA$9.99 per month, this higher tier effectively doubles the charge to CA$19.98.

How to set up Crave: Step-by-step guide

Game of thrones official trailers for every season

Can I watch Game of Thrones on TV in Canada?

Game of Thrones no longer airs on TV through HBO Canada. A partnership was struck with Crave, a subscription video on-demand service that secured the Canadian broadcasting rights to the series. This deal is pretty ironclad, so you won’t find GoT legally offered on other streaming platforms in Canada.

Explore streaming services to watch your other favourite shows

Try before you buy with these free trials

Looking for your next compulsive binge?

What will you be watching in October?

If you’re a movie buff, Prime Video has your September sorted.

Canada ranks 5th out of 18 for the percentage of its population with at least one streaming service, with 61.24% paying for a subscription.

It’s a good month to be a Prime Video subscriber.

Stacie Hurst is an editor at Finder, specializing in loans, banking products and money transfers. She has a Bachelor of Arts in Psychology and Writing, and she completed one year of law school in the United States before deciding to pursue a career in the publishing industry. When not working, she can usually be found messing around with games, photography or floral arrangements in memory of her former days as a flower shop assistant.