See our full list of pros and cons below.
No reviews yet. Write a review
Jay Jackson

Sorare is a fantasy football game built on the Ethereum blockchain. It stands out from its competition because of its use of non-fungible tokens (NFTs), the incentive of prizes, and the support received from popular gaming brands such as ConsenSys and Ubisoft. Several football clubs are also in support of the platform.

Sorare is a fantasy football game that is based around collectible NFTs. Players can trade and play with officially licensed digital cards and earn rewards worth potentially thousands of pounds each week.

The digital cards used on the Sorare platform are non-fungible tokens. Non-fungible tokens, or NFTs, are digital tokens that represent a digital or real-world object. NFTs have been used to represent objects such as art, videos and music. As tokens are non-fungible, it means that they are not interchangeable. So while 1 Bitcoin can always be swapped for another 1 Bitcoin, the value of each NFT is independent and, therefore, cannot be swapped. Once a player purchases a card on Sorare, that card cannot be exchanged with another card. Each card is unique.

The NFT footballer cards are built and distributed on the Ethereum blockchain. The cards act more like a collector item which is unique in fantasy sports. Cards are purchased within the Sorare platform and are then owned by a player. The cards can then be collected or sold to other users.

Each football player has a card that represents them on the Sorare platform. The better the player performs in real life, the more the corresponding card will be worth.

Similar to real-life collectibles, Sorare cards are also valued on scarcity. The rarest cards are worth more than the common ones.

There are 3 levels of scarceness on Sorare: 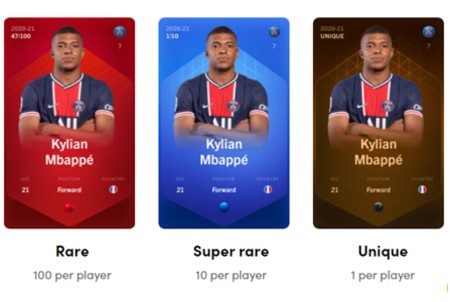 As Sorare cards are digital collectibles, a user must grow and develop a collection over time. Once a card is purchased, a user must then wait and see how the player performs in real life. The better a player performs, the more their cards will be worth.

Sorare collects football data from the data stats platform, Opta. This ensures complete transparency with regard to data collection and how the data is used to rank players.

Sorare cards can be acquired through auctions or by directly purchasing them from other users. All cards can be sold within the platform transfer market.

Players can set their own prices when selling the cards on the transfer market. Within the market, the price of each card can be viewed, alongside its percentage of XP bonus. Sometimes players can be contacted via discord if they are willing to negotiate prices. However, this is not always possible.

Sorare cards can also be acquired by winning tournaments within the game, or by ranking highly within weekly or monthly performance stats. Tournaments reward winners with either super rare cards or monetary rewards. Those that rank highly can receive super rare cards.

How to play Sorare

To get started playing Sorare, a player must first build a team. When signing up, a player will receive 10 common cards. These cards have a white background and hold a minimal value. The purpose of these cards is to get a user started on the Sorare platform

Players in a team must be placed into a formation of choice. Every team consists of 5 players and must include a goalkeeper, midfielder, defender and forward. The fifth member of the team can be an outfielder of your choice. This gives each player a lot of freedom and control. To assign a player as captain, click the star next to the player's card. The captain will be awarded a bonus multiplier for their role. All players are referred to as Managers within the Sorare platform.

Once a team has been constructed, the team must then be validated. Choose a team name and begin your first tournament. After validation, a player will need to enter it in a rookie league, which is reserved for new players. After playing for 4 weeks or in 4 leagues, you will be promoted. From here, you can keep building up your team using the cards you win, or you can sell and build your team via the transfer market.

Sorare offers extensive guides and resources that will help you become a better Manager.

If a team finishes in the top 30% of the tournament, a user is rewarded. These rewards keep players using the platform and utilise new member growth.

Players can also help footballers grow their XP by sending them to a special training league. This feature is valuable for those who want to build their players before selling them on the market for a profit.

While good performance within tournaments is useful, the players represented by Sorare cards still have to perform in real life. Their real-life performance, which is classified and monitored by Opta, carries the most weight when valuing Sorare cards.

Sorare implements a unique structure for their prizes. This structure balances how the unique cards are acquired. To balance out card distribution, certain cards can only be earned through winning tournaments. For example, ranking first on the monthly All-Star leaderboards will allow a player to pick a unique player card of their choice. If a player wins the weekly All-Star or tournament leaderboards, they will receive a super rare player card.

How to buy soccer NFTs on Sorare

The Sorare platform comes with its own marketplace where Managers can sell football cards (NFTs). This is known as the Transfer Market.

To purchase a card from the marketplace, click "Transfer Market" in the menu and select "Manager Sales". In the window that follows, a user will be able to see the cards that other Managers are selling.

Select the cards you want and purchase them for the price shown. All the prices are fixed and all listings are active for 2 days.

How to sell soccer NFTs on Sorare

To sell player cards on Sorare, head to the "Gallery Area", where you can see all playing cards in your portfolio.

Select the card you wish to sell. A pop-up should appear similar to the one below. 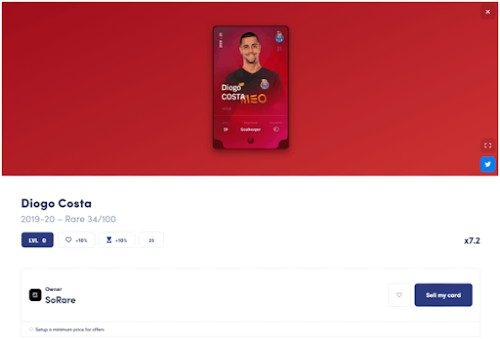 Click on the "Sell my card" button and enter the price you want to sell your card for. Please note that this option does not involve an auction, so state the exact price you wish to receive. To estimate how much to sell a player card, it is best to use the estimations in the market.

If a card is not sold in 2 days, the sale is cancelled. You can put the card up for sale as many times as you like. A user can also cancel a sale if they wish to change the price of a card.

Is Sorare safe to use?

Sorare is a legitimate game that has the backing of gaming giants such as Ubisoft. The game has managed to attract over 50,000 players and secure licences with football teams from all over the world. The credibility of top gaming platforms and world-class football teams implies that Sorare should be a relatively safe platform to use.

While a safe platform, as playing cards are digital assets, there will always be inherent risk of technical exploit. Sorare should implement security protocols to avoid this reality, but the security implemented by the platform is not well known.

Although both Sorare and NBA Top Shot incentivise NFTs, they are very different platforms. Sorare is a fantasy football platform that allows users to purchase NFTs in the form of players' cards. These cards represent world-renowned footballers from different football clubs. In comparison, NBA Top Shot sells NFTs that represent individual moments such as ankle-breakers, buzzer-beaters and rim-rattlers.

Sorare is a unique game that allows players to use their football knowledge to construct and build their own fantasy football team. Unlike other fantasy football platforms, players can win high-value footballer cards which are distributed as NFTs. They can either be kept as collectibles or sold for profit.

Pros and cons of Sorare

Jay Jackson is a crypto trader, researcher and freelance writer. He works closely with people and businesses in the crypto sphere, writing blog posts, guides, press releases, reviews and ebooks. 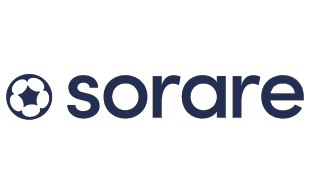