Not content with being “just another altcoin”, NEM set out to develop a smarter and more technologically advanced blockchain.

Launched in March 2015, New Economy Movement (NEM) is a platform that brings new features to the blockchain system. Starting out as little more than a proof-of-concept, it’s been picked up by the commercial blockchain, Mijin, causing the value of the platform’s currency, XEM, to increase in value.

NEM brought a lot of upgrades to what currently exists in terms of blockchain technology, upgrades that we’ll look at in the next section. XEM, the primary coin used on the platform, is not yet being used by merchants (as of September 2017). However, its value has grown considerably over the very short period the currency has been in operation, and speculators predict NEM’s usage will increase.

All transactions on a blockchain are stored in files called “blocks”, and each block can be considered a page containing a list of records, or transactions, similar to the way a ledger works.

Blocks are attached to the end of the blockchain (hence the name) and once attached and accepted by the network, they can never be modified or removed.

Importance is a measure of how much you’re invested into the NEM system. The XEM assets in your wallet become “vested” after a set amount of time. Once you have 10,000 XEM vested, you will be able to generate new blocks and earn the transaction fees for all transactions on that block. 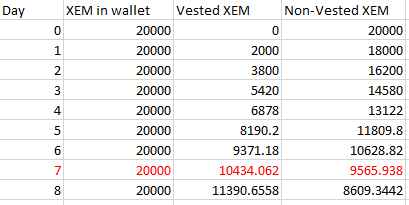 With that said, the price of XEM is still extremely volatile, as users and speculators wait to see whether the NEM platform will get the widespread adoption by merchants that it needs.

Transferring money using the NEM platform depends on the currency you’re transferring, since NEM is the blockchain technology, not the currency itself.

Since XEM and NEM are still so young, the value is still relatively low and you might be able to get XEM at a good price. If, for example, you had been paid US$90 in XEM in April 2017, you would have been given 3,000 XEM. In September, those 3,000 XEM would amount to US$900 if sold. Getting paid in XEM could be a good step, not only for the future of the network, but also to build your wallet’s value. If the value of the coin increases, so will the value of whatever amount of XEM you hold. Remember, though, that there’s no guarantee that the coin will gain value.

NEM is still fairly new, and any cryptocurrency so young will suffer from a great amount of risk, as well as ups and downs. Not only that, but there is still no roadmap set in stone, so we’ll just have to wait and see.

Some speculators are calling NEM “the sleeping giant”. Built from scratch to avoid the same pitfalls as other bitcoin forks that become nothing more than “just another altcoin”, NEM’s future may have promise. Its value rose from the start and new projects are coming to the platform that make full use of its ability to trade not only currency, but also assets.