Monsta Infinite Review: How to play and earn

Learn how you can earn real money by pitting your Monstas against enemies and other players in Monsta Infinite, a strategic planning and logic NFT play-to-earn game.

What is Monsta Infinite?

The game’s economy is fueled by the Stamen Tellus (STT) token, which can be used in various in-game activities, such as breeding. Players can engage in Monsta creation and trading, which works similarly to the breeding mechanism in Axie Infinity, but is referred to as “Synthesis Cloning” in Monsta Infinite, where players are given tools to create a Monsta army. This mechanism can also combine Monstas to create more powerful Monstas.

The ultimate mission of the founders is to make digital finance and cryptocurrency more palatable and accessible to everyone by way of gamification. An ambitious part of their vision is to create a virtual world that enables people to attain a universal basic income through gaming and finance.

What are NFTs on Monsta Infinite?

The NFTs on Monsta Infinite consist of the Monstas that users play with in-game, as well as in-game items, which are all usable and tradable in the game’s Monsta Infinite Market. Since NFTs are stored on a blockchain, players can claim absolute ownership over these virtual assets and can monetize them as they wish.

Each Monsta has its own class, set of attributes and body parts that contribute to its rarity. This determines its value in conjunction with supply and demand. While no two Monstas will be the same, players can create stronger and more valuable Monstas by combining two Monstas.

The ecosystem is capable of supporting a self-sufficient, sustainable and independent game economy through this framework.

To understand how an NFT works and why they have been called the next best thing in gaming, check out this guide on how NFTs function.

How does play to earn work within Monsta Infinite?

The game is free to play (F2P), meaning new users don’t need to spend before they can participate in the game.

There are 3 primary ways you can earn in Monsta Infinite, which is very similar to how other F2P platforms work.

What are Monsta Infinite tokens?

The Monsta Infinite platform has issued 2 types of tokens: MONI, the governance token, and SST, the in-game economy token.

What is MONI used for?

MONI is a governance token that allows holders to participate in the platform’s decision making, including gaming mechanics and future upgrades. MONI holders will be able to claim rewards by staking tokens and playing the game, and players can earn more MONI when they play various games within the Monsta Infinite Universe.

STT, or the Stamen Tellus Token, is the in-game currency token that can be earned by players through battling enemies and other players. It is used to participate in in-game activities such as cloning Monstas or purchasing game assets. STT is a BEP20 token like MONI and can be transferred to the Monsta Chain from the BSC or vice versa, and is available via PancakeSwap.

Monsta Infinite follows card-based gameplay where players are given 5 cards from a draw pile, with each of them containing abilities and actions that can be used against opponents or allies. Then the cards are placed into a discard pile to be reshuffled and returned to the draw pile after all cards have been used. 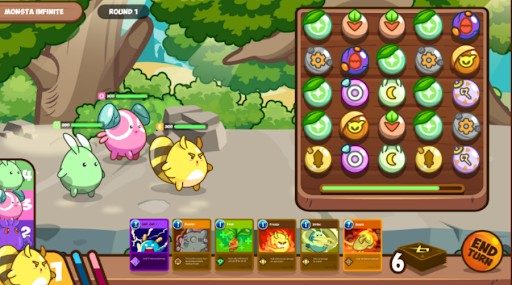 Each turn also offers players the chance to enhance the fighting capabilities of their Monstas through a match-three puzzle system, which also ensures that no bots can play the game.

All the cards that players can utilize are based on the skills and attributes coming from each body part of their Monstas. These skills have different stamina or mana costs so players need to be strategic in selecting the best cards to play given their limited mana pools.

Monstas are composed of 6 different body parts, with each of them affecting the performance in battle, and can be upgraded using STT or Jilaka cores, which can be earned by beating Jilakas in the game’s PvE mode. Body parts can also be augmented by sacrificing other Monsta, creating a new special skill card.

MONI can be bought by whitelisted members, except for those who have already made purchases in the first presale. Using the oversubscription method, the surplus proceeds of the sale will be refunded to the subscribers. There are a total of 7,560,000 MONI tokens for sale in the Barter Presale 2.

There are different races and classes for Monstas in the game.

Each race has its own set of classes, each having different capabilities that players can use in different ways, such as dealing damage against opponents more effectively, healing or empowering other Monstas, or farming resources.

Players who want to compete against other players can enter the PvP mode in Dozo, which displays 5 ranking boards that players can enter depending on the level of the Monstas that they own. The top players for each rank will receive $MONI as a reward at the end of each season.

This set-up solves the problems that plague today’s pay-to-win systems where only wealthy or long-time players can have strong upgrades for their in-game characters.

Expedition supports the game’s PvE mode, where players can go on a journey to fight against Jilaka. This mode allows gamers to carry up to 12 Monstas for each session.

Note that the 12 Monstas entered into the PvE mode can only be chosen once a day. You cannot re-enter the same Monstas in expedition sessions more than once. Therefore, owning more Monstas means that you can earn more rewards in this game mode each day.

Each battle in this game mode also has a single-day, permanent effect for Monstas. If a Monsta dies in a battle, it will last throughout the day and cannot be used for another expedition unless revived using STT.