What is League of Kingdoms?

League of Kingdoms is a strategy MMO (massively multiplayer online) game. Within the game, you can build and nurture your own kingdom while at the same time competing with and attacking other players. You do this either on your own or in alliance with other players, who can not only support you in warfare, but share resources and help you increase the value of your territory.

Both land and the resources you need to grow your kingdom can be minted as NFTs, and then traded outside the game.

You can make money by trading assets, as well as by renting out access to land. Owners of land in the game receive their cut of a pool of 5% of all the resources gathered by players, and another pool of 10% of the profits from in-game purchases that is distributed to users in DAI, a stablecoin pegged to the US dollar.

You can play League of Kingdoms on iOS, Android or on your desktop browser.

What are NFTs in League of Kingdoms?

An NFT is a unique digital token used to represent ownership of a digital asset – in this case, in-game items and collectibles. NFTs are attracting a lot of interest as they could solve the issue of collectability in gaming in general.

NFTs offer the prospect of truly one-of-a-kind in-game assets that can hold their value or even grow in value over time. They may be reliably updated and augmented as gamers hold on to them. Alternatively, gamers may wish to trade them in one of the many thriving online marketplaces available.

Within League of Kingdoms, NFTs are lands and totems. Each of these types of NFTs have a different function in the game.

How does play to earn work within League of Kingdoms?

There are 3 ways to earn money in League of Kingdoms:

Does League of Kingdoms have a token?

At the time of writing (8 October 2021), League of Kingdoms does not have a token unless you count the NFTs minted to validate ownership of your land and to represent ownership of particular resources.

Any distribution of revenues from the League of Kingdoms team comes in DAI, a stablecoin tied to the US dollar.

However, recent blogs from the team have hinted at a mysterious “economic framework” that has required some regulatory compliance work, so watch out for future updates from the team behind League of Kingdoms.

How to play League of Kingdoms

League of Kingdoms is relatively simple once you find yourself within the main interface of the game. For anyone who has played a top-down strategy game, the layout of the map will be familiar. However, if you’re new to this style of game, keep reading to learn how to play League of Kingdoms. The aim of the game is to grow and develop your kingdom through careful resource management, while (hopefully) successfully defeating your nearby rivals in battles that look like this: Let’s break down some of the key concepts that will get you on the path to victory.

We’ve talked elsewhere about the nature of the game’s land as an NFT asset, so let’s turn here to the practicalities.

There are set to be a total of 65,536 tokens players can create, with each one able to host up to 16 kingdoms.

As you can see, the initial state of the land is pretty sparse: It’s down to you to get building.

As in many other strategy games, the bedrock of your campaign is going to be gathering resources – in this case lumber, corn, gold, stone or crystals.

When your count of a given resource reaches 100,000, you receive a development point that you can use to upgrade your land, which will improve the quality of resources it spawns and, in turn, increase your share of the passive reward pool.

You can use these resources to create 3 different kinds of units: infantry, archers and cavalry.

Also, there are rare items you can gather and keep in your treasure house: 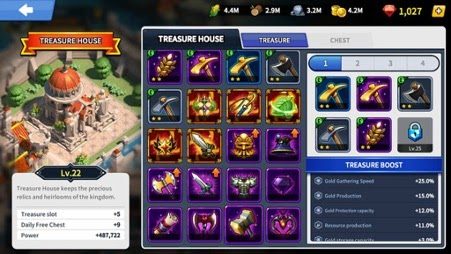 These can have passive powers like accelerating resource gathering, or active like granting your units the ability to teleport.

When you join the game, you get a 72-hour window where you are protected from other players’ attacks.

Once this ends, you won’t last long if you don’t make some friends and join an alliance, where you can not only coordinate attack and defence, but trade resources and get to know each other through a chat function.

Every 2 weeks, a shrine will appear in either unoccupied territory or that of another alliance. The alliance that captures this shrine receives rewards like boosts to their units’ health or speed. The following screenshot is an example of how alliances are ranked: 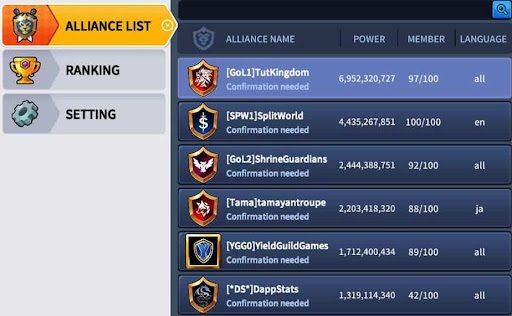 Totems in the game are ancient artefacts that represent the land underneath them, and can be minted as NFTs and traded. When placed on a land, they give magical powers and stats to the user.

Congresses sit above alliances and are in charge of the game’s governance.

To keep things clear, here’s a handy diagram produced by the developers: 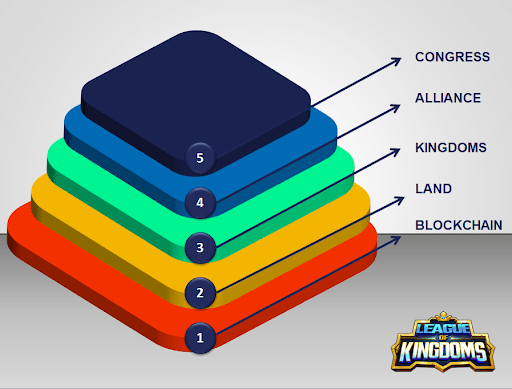 Congresses are where leaders elected by each alliance come together to determine the governance of your continent (i.e. server). The most important question is usually how game rewards are distributed.

Andrew James is a cryptocurrency writer for Finder. Andrew has worked in and written about crypto since 2017. His hobbies include playing bad rugby and cooking acceptable curries.