Bitcoin has seen some extreme volatility in the last 24 hours, losing over $1,000.

Bitcoin shot back up again shortly after, rebounding at $23,919 – regaining 4.6% in as little as two hours. Most recently, Bitcoin appears to be heading south on a very steep slope and is currently trading at $22,905. The Gemini Exchange charts show Bitcoin virtually cliff diving.

The price of XRP is being negatively affected again as the US Securities and Exchange Commission (SEC) filed a lawsuit claiming that Ripple released $1.3 billion in an unregistered securities offering.

The filing said, “The SEC has filed an action against Ripple Labs and two of its executives, who are also significant security holders, alleging that they raised over $1.3 billion through an unregistered, ongoing digital asset securities offering.”

XRP on Friday, December 18 was trading near an all-time high for the cryptocurrency at $0.63 and was already tracking downwards to be sitting lower at the start of the week with a spot rate 12 cents lower at $0.51. At the time of press, XRP was trading at a steep discount of more than 50% since last Friday currently showing $0.30. 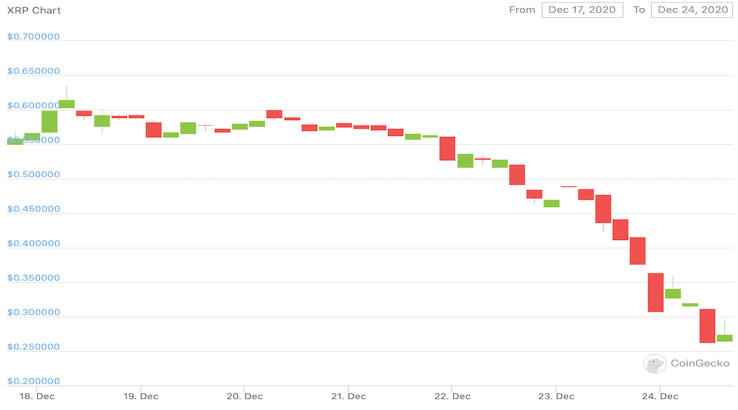 As Ripple Labs CEO Brad Garlinghouse pre-empted the SEC’s filing, XRP continued to face sustained downward pressure, and as the seriousness of the filing was reflected in market sentiment, that pressure undercutting XRP has gathered momentum.

The filing represents one of the more significant challenges the SEC has brought against any cryptocurrency-related organization. In October 2020, a New York district court awarded the SEC $5 million in damages brought about from the initial coin offering (ICO) of Kik in which Kik raised an estimated $100 million.

The complaint states that as well as organizing and advertising the ICO, the proceeds of the offering were used to fund Ripple Lab’s business activities. The allegation specifically names CEO Brad Garlinghouse and co-founder Chris Larsen, who are alleged to have personally sold roughly $600 million in unregistered securities.