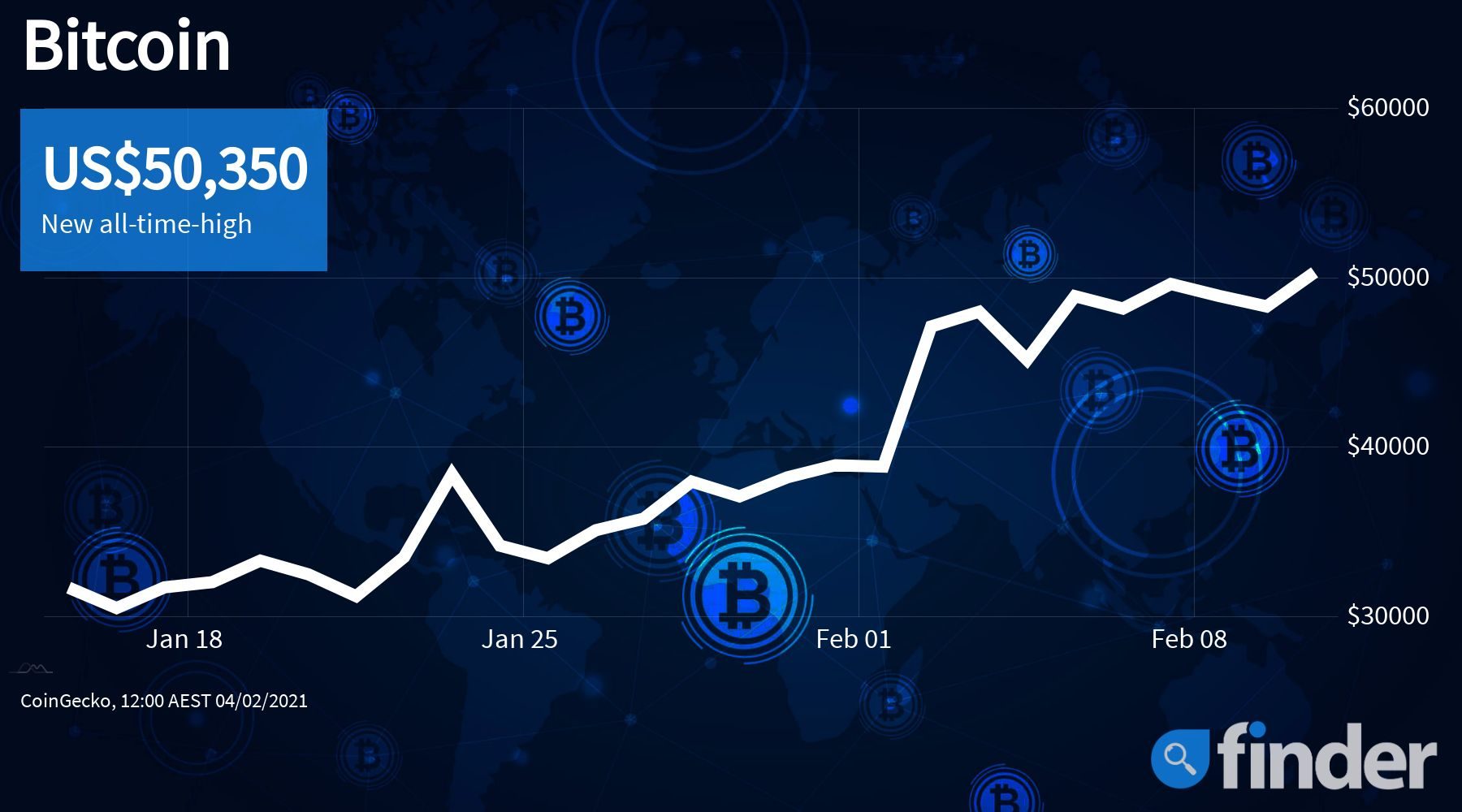 Bitcoin continues its meteoric rise by setting a new all-time high at $50,000

The price of Bitcoin has been trading upwards for the better part of the day.

Bitcoin went as high as $50,350 before a $1,000 haircut on the BTC spot price rebounding to $49,306. As a result of the sustained demand and relentless Bitcoin news cycle, Bitcoin market capitalization is nearing $1 trillion. It’s presently sitting at $921.7 billion, dominating 60% of the digital-assets market. This makes a single unit of the digital asset worth more than the median take-home salary in America – which was roughly $40,000 in 2019 according to the Economic Policy Institute.

Cryptocurrency markets have reacted positively to fintech apps PayPal and Cash App as they have grown the cryptocurrency user base to hundreds of millions. Within four weeks of partnering with Paxos to provide Bitcoin transactions on its network, PayPal is already buying nearly 70% of the new Bitcoin supply, according to a report by Pantera capital.

In addition to that, BNY Mellon, Morgan Stanley, JP Morgan and other financial institutions have all thrown their hat in the ring. The world’s most valuable company Tesla Inc, having announced a $1.5 billion Bitcoin acquisition, may also be driving institutional interest in cryptocurrencies. Following the demand and supply theory of Bitcoin pricing, analysts at Pantera Capital say that Bitcoin could reach as high as $115,000 by August 1, 2021, suggesting that Bitcoin is following patterns similar to previous halving events.

The graph distributed by Pantera shows Bitcoin just below the trend line following similar halving events. A halving refers to the programmed scarcity of Bitcoin supply, meaning that the block rewards for miners decrease by half at certain times.

The idea is that the halvings have an effect on price around six months after the halving occurs. The previous halving was in May 2020, before which around 18,000 Bitcoin were released in block rewards with every block solved.

Since May 2020, only 9,000 Bitcoin are released with every block solved. Increased scarcity of the Bitcoin supply is occurring at the same time as increasing market demand.

Paul Tudor Jones, founder and CEO of Tudor Investment, wrote to the wealth fund’s members that he’s betting on Bitcoin by incorporating the asset into the overarching investment strategy of the firm.

Jones has also revealed that up to 2% of the firm’s portfolio will be targeted towards investment in Bitcoin and other digital assets. Declaring even greater positive sentiment for Bitcoin, Jones said that the world could be witnessing a historic moment with the “birthing of a store of value.”

“Every day that goes by that Bitcoin survives, the trust in it will go up,” he forecasted.

Jones went on to describe the reaction to the Federal Reserve’s quantitative easing measures as the public health response to COVID-19 strangled economies around the world.

He added that the circumstances were unprecedented, with central banks across the world mirroring the Federal Reserve with its aggressive bond purchasing — to the extent that developing a strategy to “defend against inflation” became necessary.

Bitcoin has now increased its price by a factor of 10 since the beginning of 2020. This has occurred in the same year as the US Federal Reserve has pursued several massive stimulus packages as part of COVID-19 relief measures. This could be lending credit to Wall Street appraisals of Bitcoin as a hedge against inflationary pressures on the US currency, leading to fresh interest from big-name investors.

Larry Fink has built the largest hedge fund on Earth with an estimated US$7 trillion in assets under management. Addressing a Council on Foreign Relations digital meeting, Fink went on to say of Bitcoin’s impact on the US dollar that it and other digital currencies were having a “real impact” on the US currency.

He even went as far as to say that the burgeoning asset class could be decreasing the relevance of the US dollar. “I’m not talking about for Americans, I’m talking about for international holders of dollar-based assets,” Fink said.

Although there appears to be very little negative sentiment surrounding the rise of Bitcoin, future regulatory changes could cause a reversal in prices.

Ray Dalio of Bridgewater Associates, the largest privately-held investments firm in the world wrote to investors sharing opinions on Bitcoin and its “analogous competitors,” citing it as “one hell of an invention.“

Dalio noted the “rising need” for gold-like assets in light of “all the debt and money creations that are underway and will happen in the future”. Based on this view, Dalio declared, “I view Bitcoin as being a gold-like alternative asset.”

Ray Dalio voiced his strongest comments by saying that he finds it “hard to imagine” that governments would “allow Bitcoin or gold” to become more dominantly used as opposed to their native currencies. Dalio goes on to say that if Bitcoin is successful “the government will try to kill it.”

For that reason, Dalio notes Bitcoin as a “long-duration option” and that its future is “highly unknown.” He recognizes the possibility to lose up to 80% of any investment in Bitcoin.

Cryptocurrency markets will watch what approach the incoming Biden administration will take on digital asset regulation, especially now as the Bitcoin bull run appears to be accelerating.

In a Senate confirmation hearing to be sworn in as Secretary of the Treasury, Janet Yellen, former Chief of the Federal Reserve Bank, said that Bitcoin needed to be curtailed and that regulations around Bitcoin required a coordinated effort to stamp out illegal activities such as “reprehensible” money laundering.

Sharing similar views, the International Monetary Fund’s Chief, Christine Lagarde, has said that Bitcoin and cryptocurrencies require global regulation. While none of this spells the end for Bitcoin’s most recent bull run, cryptocurrency markets will eye regulators’ actions very closely.