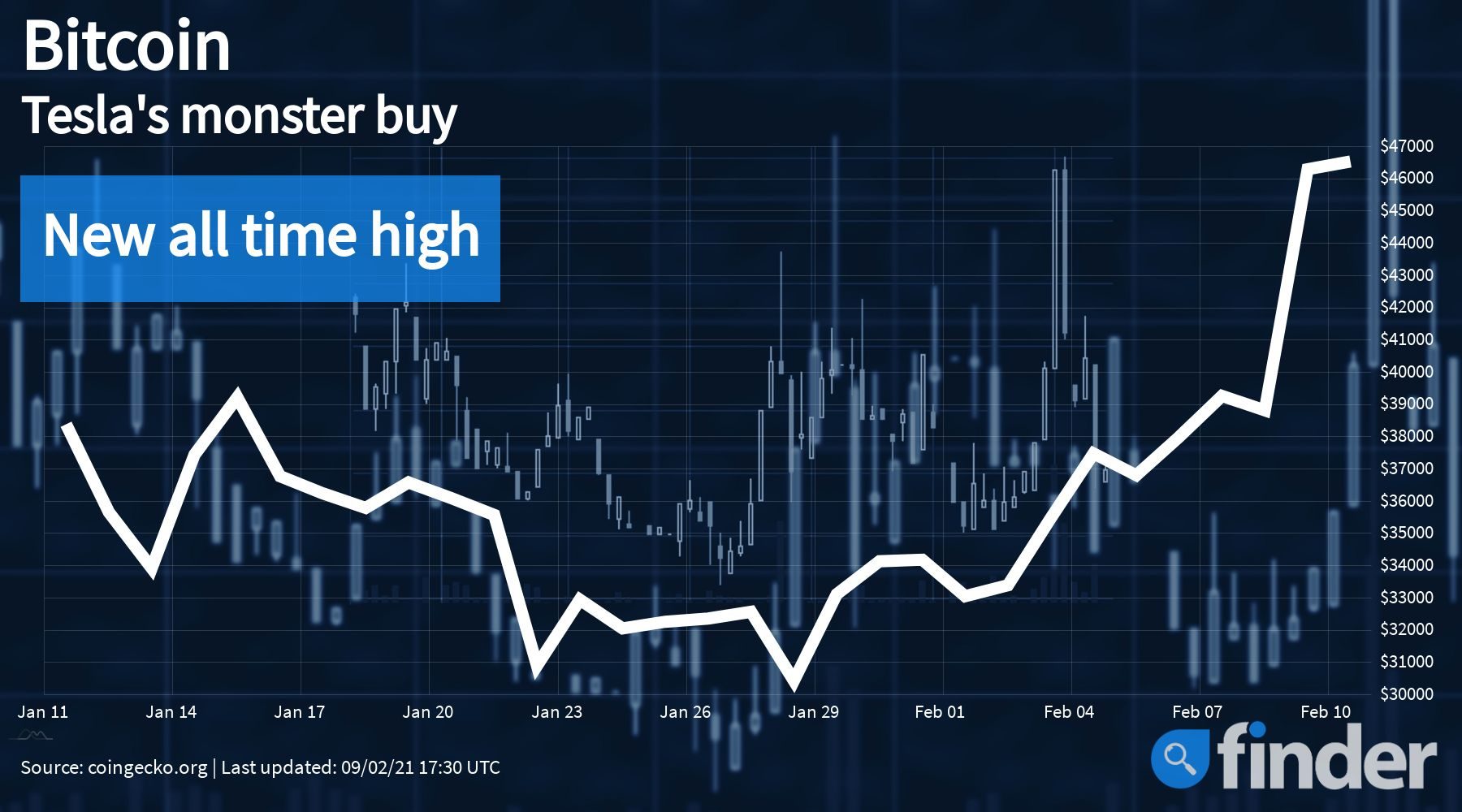 Bitcoin crested US$48,000 after Tesla announced its crypto move.

Bitcoin is trading at $47,127 at the time of writing, which is a 10% increase in the last 24 hours from the day’s low of $42,655 according to pricing from Coinbase exchange. The current spot price is a fraction short of Bitcoin’s new all-time high of $48,025 recorded 12 hours ago.

Its rise comes amid the market’s reaction to Tesla’s regulatory disclosure in which it announced a $1.5 billion Bitcoin acquisition, which sent the already hyped cryptocurrency market into overdrive.

The market for altcoins is seeing massive gains with most cryptocurrencies in the top 100 up by over 20 percentage points on the week according to pricing from CoinGecko.com. Total cryptocurrency market capitalization stands at $1.41 trillion, up 8.3%.

Dogecoin remains 107% above yesterday’s price and has moved into 11th spot in terms of market capitalization, climbing four spots since last week.

Business Insider quoted Saxo Bank’s head of equity strategy as saying that the Tesla move opened up Tesla to immense risk. Peter Garnry went on to say that with a halving in the price of Bitcoin, Tesla’s yearly earnings would be cut to near zero.

Skepticism over the move is fair as it remains to be seen how shareholders will react to Tesla “trading cryptocurrencies” when investors expect Musk to make money “selling cars” according to comments by Jerry Klein at Treasury Partners.

However, Jim Kramer presenting on CNBC’s Mad Money, said that it’s “almost irresponsible” to not have a position in digital assets at the corporate level. He pointed to Bitcoin’s growing use as a hedge against inflation and its growing adoption among corporates to support the idea.

Mike Novogratz, founder and CEO of Galaxy Digital told Bloomberg TV that he believes every company in the United States will be following the example of Tesla. He suggested the price of Bitcoin could even double to $100,000 by year’s end should he be right with corporate America following suit.

The image below shows monthly Bitcoin mining revenue, with the month of February showing mining revenue equaling the whole month of July 2019 in only nine days. At $335.9 million today, Bitcoin revenue is on track to equal the $1.12 billion recorded in the previous month.

Cryptocurrency mining revenue has increased significantly with the previous month recording the second-highest monthly miner revenue behind December of 2017, which recorded $1.25 billion as Bitcoin reached all-time highs of $20,000

In a statement, Marathon Patent Group projected gross annual profit at $523 million for financial year 20/21 with a Bitcoin price of $28,000 and full deployment of mining machinery. Now, with Bitcoin more than one-third above that price, the projected figure could be as high as $700 million in gross profit at present prices.