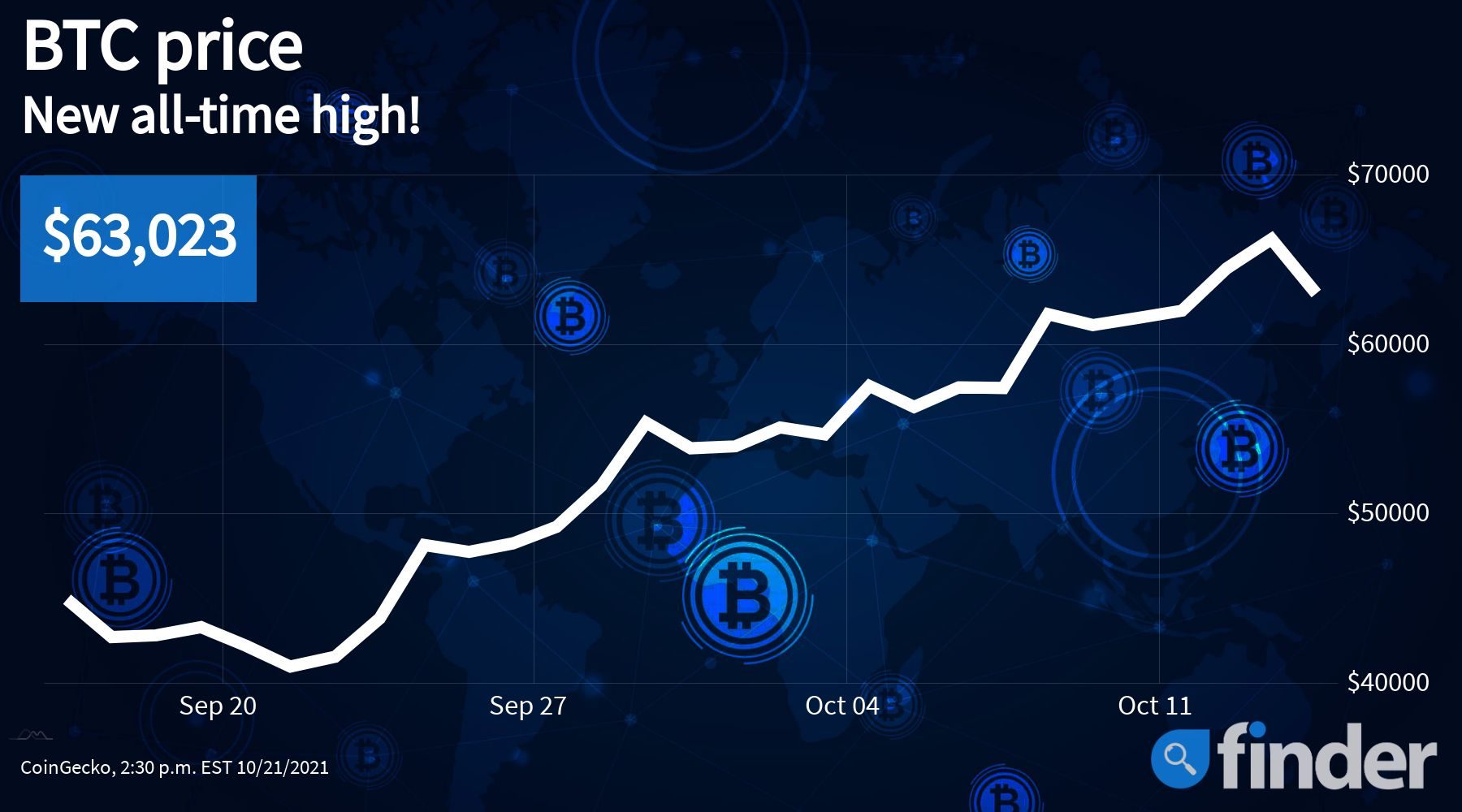 Bitcoin continues 12 months of steady growth, up nearly 400% since this time last year.

It’s been six months since we could last say this, but it’s finally happened again – Bitcoin has broken through to a new all-time high price of $67,276 on October 21, 2021.

Bitcoin is up nearly 15% in the last week, in part due to the news that the US Securities and Exchange Commission (SEC) approved the very first Bitcoin-related exchange-traded fund (ETF).

This follows a string of events that stirred the market and led to bullish sentiment among investors, driving the overall market cap of cryptocurrencies to a record high of $2.8 trillion. According to CoinMarketCap, Bitcoin has also eclipsed its previous records for 24-hour trading volume.

Let’s take a look at how we got here.

Why the SEC approval is such big news

Financial institutions have been working for years to get a Bitcoin ETF approved for public trading in the US. The SEC was always quick to shoot down these proposals, citing security concerns and regulatory issues.

After months of hinting that they were looking closely at Bitcoin, they finally allowed an ETF to trade Bitcoin futures contracts. ProShares’ Bitcoin Strategy ETF started trading on Tuesday, October 19, and Bitcoin has been on a bull run ever since.

For starters, the SEC approval gives Bitcoin greater public exposure. Traditional investors who were skeptical about holding cryptocurrency now have the means to get involved in the market without needing to hold the underlying asset, which is a hurdle for some. As more and more ETFs are approved, the number of people invested in Bitcoin will likely grow.

Regulatory approval also shows that governments are finally willing to take Bitcoin and cryptocurrency seriously. SEC legislation is just one more step towards governments accepting Bitcoin as a legitimate asset and allowing its inclusion in more financial markets.

The past six months in the cryptosphere have been fast-moving. Twitter integrated Bitcoin tipping, Facebook is about to release a stablecoin, non-fungible tokens (NFT) have exploded, and all the while DeFi protocols and their associated platforms continue to chug along with the support of the die-hard crowd.

What’s next for Bitcoin?

Many people are scared away from investing in Bitcoin due to its well-documented price swings. However, as the market expands, diversifies and becomes “more institutional, the amplitude of price swings will moderate,” according to the CEO of Pantera Capital, Dan Morehead.

Public confidence, in conjunction with greater accessibility to the coin, has left the vast majority of investors bullish. Finder founder Fred Schebesta believes that BTC will “cap the year at $87,000 due to the surrounding hype,” while other experts have predicted the cryptocurrency possibly exceeding $100,000 within the next six months.

Just one month ago, the Bitcoin industry’s total market cap was about $1.7 trillion. Off the back of the SEC approval, this figure has soared to $2.6 trillion in a matter of weeks.

There are also interesting updates coming on the tech side of Bitcoin. Jack Dorsey, head of Twitter and American financial provider Square, is “investigating the technical requirements” for building an open-source Bitcoin mining system. This will assist in further decentralization of the asset, which is associated with greater security.

Greater adoption by the public and especially governments worldwide will likely be a key driver in Bitcoin’s future growth. Where it goes from here is anyone’s guess, and Bitcoin’s surge over the past few days is not necessarily an indication of future gains.

What we can say is that the next few months of Bitcoin are going to be interesting. At this point, it’s pretty much “must-watch” television.