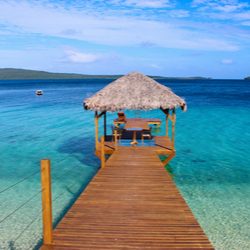 A dazzling port of call for scuba divers, the island nation of Vanuatu is home to 270,000 people in the South Pacific. If your travel plans take you to Vanuatu, consider cutting your budget down by investing in a prepaid SIM card.

By replacing your home network with a local one, you can drastically reduce charges for roaming and data usage. You can buy a prepaid SIM card with VUV1,000 credit and 1GB of data for VUV2,000 (US$18.28). Finder.com offers the following guide to Vanuatu’s telco operators.

There are two mobile network operators in Vanuatu: Digicel and TVL. For data purposes, there is a third provider called Wan Tok that opened its 4G/LTE network in 2014. However, it’s only for wireless Internet in Port Vila and a few surrounding areas, and so we’re not going to talk about that in this article.

Digicel runs the show in Vanuatu. It has close to 90% of the subscribers in Vanuatu on its network. When you buy a starter SIM card, make sure it’s a new one with 4G/LTE enabled. Otherwise, you’ll wind up with an older 3G model that won’t let you browse at the fastest speeds possible.

Digicel’s 4G/LTE network started in Port Vila and now includes Santo. You can buy its SIM cards at the Bauerfield International Airport or in any Digicel store. The starter card costs VUV1,000 and comes with a preloaded credit of VUV1,000. Top-ups can be done online at Digicel’s international top-up website which accepts most major credit cards. You also can top-up by purchasing vouchers from local vendors. To check your credit balance, dial *120#.

Digicel’s out-of-bundle rate is VUV50 per MB, but its data feature packages are much better deals.

Telecom Vanuatu (TVL) runs the landline network on Vanuatu, but is a distant second in coverage and quality to Digicel. Its 2G network covers around 75% of the population. Its 3G and 4G coverage are considerably less. There are SIM cards available at a kiosk at the airport and at TVL stores. The starter kit costs VUV1,000 and comes with a VUV1,000 credit preloaded.

In order to activate your account, dial 171 and follow the prompts. Top-ups can be done physically by purchasing a “RIFIL” card from stores, outlets or other vendors. Dial *184*<voucher code># to top-up. You can always check your balance by dialing *183#.

The night data can be used from 12am-6am. To activate, text the code to 183 or dial *183#. All of the above packages include using Facebook for free, either via app or the mobile website: http://m.facebook.com.

Advice from TripAdvisor about SIM cards in Vanuatu

In addition to being an online review platform for hotels and attractions, TripAdvisor has an impressive online community of members. Here’s some advice from recent visitors to Vanuatu:

“Vanuatu has two providers of GSM-class mobile services. SIM cards are abundantly available in Vila at supermarkets and even roadside stalls. Is it cheap? Yes! Essential and convenient for anything from booking taxis/drivers/restaurants/ rentals and events. You can also buy mobile data from the same providers if you can’t do without the Internet.”

“We took an old unlocked phone and when we arrived at the airport in PV, we bought a Digicel SIM on the way out. They installed it for us and made sure it was working. The VUV10,000 SIM lasted right up until our last night and that was seven days of calling home and countless texts.”

Vanuatu has two major SIM card providers. Here are some of the positives and negatives about these companies.