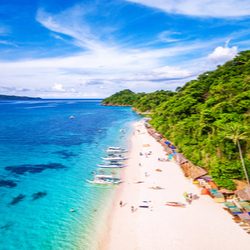 When traveling to Asia, make sure you live within your budget. One thing you should consider is allotting a portion of your funds to your communication needs. It’s important to stay in touch with friends and relatives, and make sure they can contact you in case of emergencies. You might think this is costly, but you can save money by switching to a local cell phone provider and buying a prepaid SIM card. A 1GB data package is usually priced at PHP50 (about US$1).

The Philippines offers many prepaid SIM card options. Costs are competitive, making it difficult to choose which prepaid SIM card is right for you. Whether you’ll be staying for a short time or longer, get to know the plans and offers at finder.com that will help you save on your communication costs.

Cell phone carriers in the Philippines

There are two cell phone networks in the Philippines: Smart and Globe. Both networks offer prepaid SIM cards that can meet your needs.

In the 2017 Asia Communication Awards in Singapore, Smart was recognized as Asia’s top digital services provider for 2016 due to its efforts to improve the accessibility of digital services for Filipinos. However, Globe has been the country’s leading telecommunications provider since the third quarter of 2016, having 200,000 more subscribers than Smart. In 2017, Globe overtook Smart as the country’s largest mobile operator with more than 10 million subscribers.

About Smart and Globe

Prepaid SIM cards for both networks can be purchased in the airport, at phone kiosks, local shops and supermarkets, or from street vendors.

Plans offered by Smart and Globe

Smart and Globe offer prepaid SIM packages that, when activated, let you enjoy perks, especially when you load credits. Reload credits can be purchased in local shops, supermarkets and anywhere you see their sign, as well as online.

The Smart LTE Tourist SIM is free upon arrival at any international airport in the country. Just show your foreign passport to claim one. This Smart SIM card is already loaded with 300MB of data upon activation and is valid for three days. An additional 700MB will be added when you load at least PHP30 within three days of activation. The pack comes with Iflix and Uber voucher cards.

Smart LTE Prepaid SIM costs PHP40. The SIM is already loaded with 300MB of data upon activation and is valid for three days. An additional 700MB will be added when you load at least PHP30 within three days of activation.

Smart offers SurfMax, Big Bytes, All Out Surf and GigaSurf data packages. All data packages use 2G, 3G and 4G/LTE where available. (Smart UnliSurf was discontinued in 2015 and replaced by SurfMax.)

These packages have a data cap of 800MB per day.

These packages have varying data caps.

All Out Surf data packages:

These packages have varying data caps too:

Just text “Travel3”, “Travel7” or “Travel30” to 8888 to activate the service for your preferred package.

Globe Non-LTE SIM costs PHP40. It uses the 3G network, and you get to choose your own mobile number. Globe LTE SIM also costs PHP40 and uses a 4G network. It has a pre-set mobile number. Call card denominations are PHP100, PHP300 and PHP500. Over-the-air prepaid reloading rates start from PHP10 and go up to PHP900. They are available nationwide from authorized Globe Load outlets.

Globe data packages are called GoSURF and SuperSURF. GoSURF may be suitable if you’re using your mobile phone for both calls and data, but if you’re a heavy data user, it’s advisable to use SuperSURF.

These packages have a data cap of 800MB per day.

Buying a prepaid SIM card in the Philippines is easy. Aside from kiosks that can be found in the airports when you arrive, almost all stores with Smart or Globe signage, street vendors, 7/11 stores and other convenience stores carry prepaid SIM cards.

There are also stalls and kiosks inside the malls where you can purchase cards. Store clerks are very accommodating when you ask them for a recommendation. If you have your mobile phone with you, they will even volunteer to install the prepaid SIM for you.

Communicating with the local vendors and store clerks is easy because English is a second language in the Philippines. But for posterity, here are some phrases that may help you communicate better when buying a prepaid SIM:

A word of advice when buying a prepaid SIM

Because there are only two mobile network operators in the Philippines, there are areas in the country that do not get strong coverage from either Smart or Globe. In some areas outside metro Manila, there’s only one network available for data usage, and this changes per region. For example, Boracay, the country’s top summer destination, has a strong signal and coverage from Smart compared to Globe. Up north, in Baguio City, the summer capital of the country enjoys a strong signal and coverage from Globe, while Smart is weaker.

It’s advisable to ask the local vendor which has a better signal when buying a prepaid SIM. Don’t ask anyone connected to Smart or Globe, as they will push their respective products. It also pays to be observant. Check out which provider has many outlets in the area. It’s more likely that outlets carry the dominant brand that has better coverage over the other.

The current state of cell phone networks in the Philippines

OpenSignal is a wireless coverage mapping company that crowdsources data on carrier signal quality from users who have downloaded its app. As of September 2017, Globe leads in 4G availability, with users able to latch onto Globe’s LTE signal 62.6% of the time, while Smart is at 52.7%.