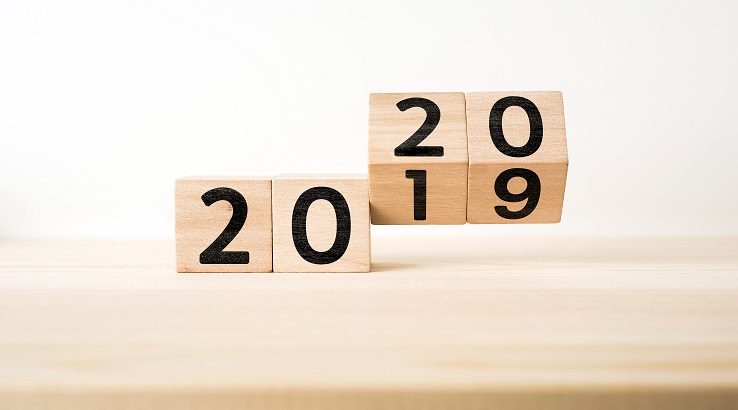 2019 was an eventful year. Here’s a look back at some of its most memorable stories.

While 2019 will likely be remembered for its political infighting when it’s recorded in the history books, it also saw some important stories in the fields of communications and banking. Here’s a look back at three of the larger stories of the past year.

There are many stories that we could include in this wrap-up about the social media giant. From its stalled cryptocurrency Libra to government fights over access to its data to questions about its access to your health information, Facebook had a busy, controversial 2019. The biggest story of the year for the company, however, had to do with privacy and its efforts — or lack thereof — to avoid fake news.

Facebook was one of the first of the modern age to recognize something that is now fundamental: The biggest asset a business can sell is you, the customer. Facebook makes a lot of money selling information about its users to advertisers. This — more than hosting apps or sending friend notifications — is Facebook’s true business. A fact that became very clear in 2019.

Following scrutiny from its role in the 2016 elections — where it not only allowed the stealing of personal information by politically affiliated third parties, but also profited on political attack ads that were factually untrue and may have come from bad actors abroad — Facebook acted in a way its fans did not expect. It opted to do nothing. In a freedom of speech argument which asserts that consumers would be savvy enough to disregard an ad that is blatantly false, Facebook argued that it did not need to impose any additional requirements to prevent the posting of fake news. Per changes made to its advertising policy in October, Facebook went from banning any ads that contained “deceptive, false, or misleading content” to only banning “ads that include claims debunked by third-party fact checkers.”

“We’re committed to fighting the spread of false news on Facebook,” Facebook wrote on a help post. “We use both technology and human review to remove fake accounts, promote news literacy and disrupt the financial incentives of spammers. In certain countries, we also work with third-party fact-checkers who are certified through the non-partisan International Fact-Checking Network to help identify and review false news.”

This pushing of the responsibility onto a third party turns preventing slander and libel online from a proactive activity to a reactive one. In the time it may take for a third-party verifier to identify, vet, and report a problematic ad, it could be seen by millions. This approach also assumes that the verifiers can detect a fake news ad easily. Advances in artificial intelligence have made it harder to detect doctored photos and videos. AI is now also being used to fake audio and to automatically generate text, meaning that fake news pages can be posted faster than they could be struck down.

This type of disinformation campaign bears great danger for the free press and for the notion of democracy.

2019 also saw the rise of not just banking alternatives, but of new banking-tech partnerships to help redefine what we imagine when we think of banking. Fueled in part by Apple’s Apple Pay and Apple Card — a credit card offered by Apple, linked to your Apple Pay wallet, and backed by Goldman Sachs — Google, for example, has announced its intentions to market co-branded checking accounts from Citigroup and Stanford Credit Union. This is matched by Facebook’s attempt to create its own monetary system with the cryptocurrency Libra, which is stalled due to a lack of governmental support.

The year also saw the number of digital-only banks increase, as well as the number of digital options now available from brick-and-mortar banks. Many of these new options are finding an audience with a population that is increasingly shopping and paying bills through their phones.

“Essentially, large banks have the potential to drive tremendous investments towards digitization and are gradually understanding the disadvantage in just upgrading the legacy software and hardware systems, which is an expensive and continuous process,” Saipriya Iyer wrote for Payments Journal. “These established firms also comprehend the need for gathering customer information to help improve their services, and digital banking could provide them with a complete view of customer needs and behavior. Digital banking assistants are another novel provision available on the platforms of prominent banks to support and advise its users, signifying a remarkable evolution in customer-bank relationships.”

A World Without Cable

For many, an undeniable truth has been hovering overhead for years: Cable television as we know it is dying. As customers continue to “cut the cable,” and with the growth of streaming options such as Disney+ and CBS All Access, many cable providers are facing a difficult choice of what to do without their cash cow.

For most companies, the answer is merging with another company. Comcast’s acquisition of NBCUniversal, for example, not only gave the cable company access to its own video content creation and distribution vertical channel, but also gave it partial access to Hulu, the video streaming service. The company can now both license NBCUniversal content as an alternative revenue source and bundle Hulu with its Internet and cable packages in order to make them more attractive. AT&T’s acquisition of DirecTV allowed for the packaging of satellite TV and mobile services, as well as the licensing of DirecTV-controlled sports and television programming.

The largest of these mergers, however, is between Sprint and T-Mobile, two wireless phone carriers. This merger will allow the new company to offer low-band 5G nationwide, which could effectively replace wired broadband — particularly in rural regions. The prospect of this means that the wireless phone companies could become the new ISPs, fully pushing the cable companies out of business. This is a fact not lost on Charter, which launched Spectrum Mobile in 2019.